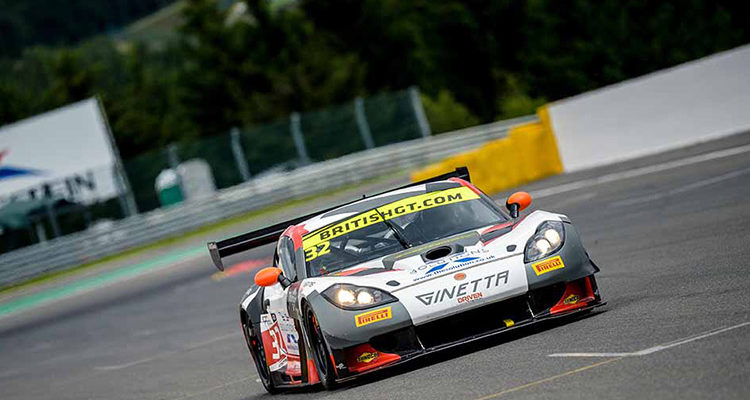 Tolman Motorsport picked up another British GT Championship points finish on Saturday after coming home 10th during the series’ annual ‘away day’ at Spa-Francorchamps in Belgium.

The historic venue is regarded as the calendar’s greatest challenge thanks to its rollercoaster-like layout, fast flowing corners, high speeds and fickle weather. However, drivers Ian Stinton and Mike Simpson remained undaunted by either the circuit’s reputation or 59 other cars that began the weekend.

Indeed, the absence of the team’s second #56 Ginetta G55 GT3 as a result of Am driver David Pattison’s business commitments meant Tolman’s hopes of maintaining its recent points-scoring run rested on the #32 crew’s shoulders.

Unlike most outfits, the Warwickshire-based squad had completed no recent prior test mileage at Spa, ensuring plenty of catch-up work was required on Friday. However, a large accident and resulting barrier damage curtailed first free practice before it had barely begun, leaving Tolman with only the second 50-minute session to play with before qualifying that same afternoon.

Prioritising a consistent race set-up over one-lap pace therefore resulted in only 14th on the grid for Saturday’s two-hour contest. A decent start helped Stinton initially pick up a couple of places before being knocked back down the order by Will Moore’s Optimum Motorsport Audi, which was subsequently excluded for making avoidable contact.

Stinton was undeterred though and, thanks to his consistent, mistake-free driving, had moved back up to 10th by the time the pit window opened after 50 minutes. And Simpson’s similar approach, made easier by Tolman’s free practice tactics, ensured the car enjoyed another fault-free run to the chequered flag.

While their race-leading heroics in Silverstone’s mixed conditions last time out might have made a bigger impression, Team Principal Chris Tolman believed Spa’s performance was every bit as positive.

“We’re really pleased with the weekend as a whole and to score more points proves that we’re continuing to make progress,” he said. “With no testing data to rely on we always knew FP1 and 2 would be crucial. We had a plan but that went out the window when most of the first session was cancelled; it really put us on the back foot.

“Unusually for Spa the weather remind dry, which didn’t play into our hands like it had at Silverstone. However, Ian and Mike both drove faultlessly, which is easier said than done when there’s so many GT4 cars to pass cleanly. The Ginetta’s performance also didn’t drop off over a stint like some of the others, so we remained incredibly consistent. It also ran faultlessly all weekend.

“Clearly the older G55 isn’t as fast as the newer generation GT3s, so we’re always looking for ways to minimise that discrepancy rather than targeting outright pace and lap times. That’s why I’m very satisfied with 10th place. The team and drivers did the absolute best they could given the circumstances. It’s also important to remember that, on another day, the three factory-backed Blancpain GT Series entries that guested this weekend wouldn’t have been racing.”

Tolman Motorsport returns to British GT duty at Snetterton, where both of its Ginettas will be back on the grid, for two one-hour races on August 6/7.

Pattison’s business commitments might have ruled him out of British GT’s visit to Spa, but his #56 Ginetta co-driver Luke Davenport was most certainly there, albeit in unfamiliar surroundings…

Although a far cry from the 600bhp G55 GT3 he would have campaigned there with Tolman, Davenport – along with his father and two French co-drivers – was soon up to speed en route to 10th in class and 37th overall.