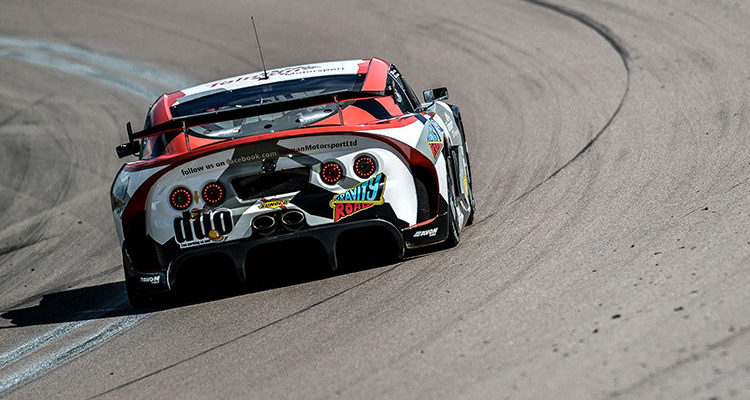 The Tolman Motorsport team, with drivers Luke Davenport and David Pattison at the wheel, turned a difficult start to the third round of the 2015 British GT Championship into a successful result this weekend. The team finished fourth in the GT4 category in its Ginetta G55 as the series visited the Rockingham circuit in Northamptonshire.

Following a successful debut at the first round of the championship a month earlier, the team was feeling optimistic for the second race weekend, which comprised a single two-hour race for both Davenport, the PRO driver and Pattison, running as the team’s AM pilot.

However, the team struggled to find a set-up that worked for the Ginetta in both free practice sessions at the circuit, which many acknowledge poses a unique challenge to teams and drivers. Off the pace, they went through the car from front to back and checked everything prior to the qualifying session on Saturday afternoon.

With just two laps for each driver and the aggregate of their individual times determining their start position, the team posted 12th for the start of the race on Sunday afternoon.

Sunday morning saw exceptionally heavy rain at the circuit and as close as 30 minutes before the start, teams were still uncertain whether it would be a wet or dry race. The Tolman team opted for a set-up on the car part-way between full dry and wet and like the rest of the field, chose dry slick tyres for the start.

Come the start of the race, Pattison took the first stint and put in a series of consistent laps to remain well in touch with the GT4 class midfield as the first part of the race developed. He handed the car over to Davenport at the mid-point, who set about putting in increasingly competitive laps to ensure the team remained in a perfect position to capitalise from any issues suffered by other drivers.

Davenport pulled off a series of overtaking manoeuvres in the closing stages of the race, shown live on Motors TV and by the time the chequered flag came out, had climbed to fourth in GT4 and 14th overall.

Commenting, Team Principal Chris Tolman said; “After the start of the weekend we had, I am delighted to finish fourth in the GT4 category and even more so to be the first Ginetta home in class.

“We had a really bad pair of free practices on Saturday – we just could not get the car hooked-up properly and couldn’t really understand why. We went through it from front to back between practice and qualifying, went for a completely different set-up and a brand new set of tyres and it worked much better.

“Come the race, the car was working really well and David put in a series of very consistent laps. Luke took over and was very quick, gaining plenty of positions in what was a very fierce scrap, judging by the state of the car when he brought it back in!

“The team also put in a superb performance this weekend. The technicians worked extremely hard to get the car working properly and this result is a genuine team effort.”

Commenting after the race, David Pattison said; “We had a terrible practice with the car all over the place. But the team turned it around superbly and we had a much better car for qualifying. We weren’t sure how the race was going to start – but the rain stopped and it dried very quickly. I was consistent and Luke was quick and we were in a perfect position to exploit any opportunities. Overall, it was a very good weekend.”

Luke Davenport said; “The team did a great job of getting the car sorted for us and getting it right for qualifying. The car David handed to me in the race was very good – he had looked after the tyres really well and by the time I got to the end, it was fairly well battered. That was the longest stint I had done but to finish fourth and the first Ginetta was a great result – I’m really happy. I’m really looking forward to Silverstone now – it’s a circuit that should suit the Ginetta better.”

The next round takes the teams to Silverstone, home of the British Grand Prix for another single, two-hour race on the weekend of 30/31 May.