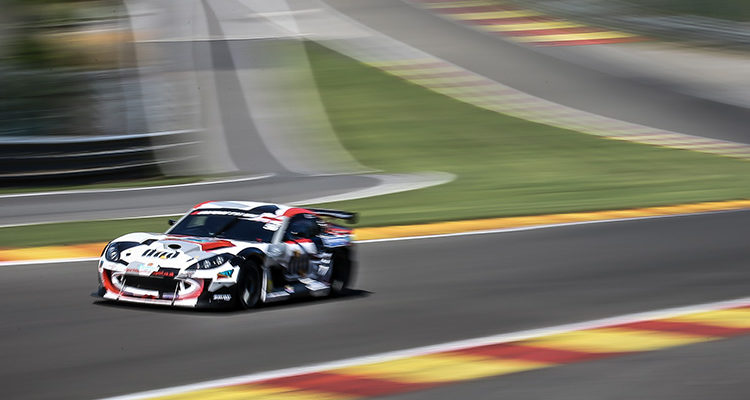 This weekend’s only non-UK round of the 2015 British GT Championship saw a monumental turn-around for the Tolman Motorsport team. It knew it was fast at the Spa-Francorchamps circuit in Belgium, having tested and raced there recently with its GT4-specification Ginetta G55 but difficulties in free practice turned into dominant speed come race day.

Having visited Spa twice recently, confidence was high approaching the first of Friday’s two free practice sessions. However, in the first, driver Luke Davenport reported a stiffness in the steering and the team diagnosed a power steering pump failure, replacing it and the steering rack.

The handling also felt strange and so, the team reverted to a known set-up established from testing. In the second of the two sessions, both drivers tried the car and were unhappy with the handling.

After the session, the technicians carefully scrutinised the Ginetta G55 and found that both rear dampers had failed, so these were replaced. With no opportunity to verify the set-up prior to the all-important qualifying session, Team Principal Chris Tolman specified a series of settings he felt would work.

As it transpired, he was exactly correct; Davenport went out and was immediately second-fastest in GT4, just 0.3 seconds off the fastest lap. The drivers then swapped, with David Pattison taking over and he managed a single clean flying lap, before a compromised second lap. His third then saw him taken out by one of the faster GT3 cars and so, the team’s session was over. However, Pattison managed to post a time 8th fastest with just two laps under his belt, a personal best and good enough to put the team fifth on the grid, with aggregate timing.

Come race day, the weather remained extremely hot and Pattison took the start. The early stages of the race were very busy, with several GT3 cars going off and Pattison held station to begin with among the chaos, until the GT3 cars began lapping the GT4 class and this caused a shake-up of positions.

While class times began to increase, Pattison remained extremely consistent until he suffered a huge, high-speed spin at Blanchimont on oil spilled from another car. He managed to keep control of the car and not hit anything, despite this occurring at 140mph but the car felt strange, so he returned to the pits just as the safety car came out. The team found nothing wrong with the car so sent him back out, allowing him to catch up to the safety car and they then brought him back in to swap drivers.

As Davenport took over, they also changed the front tyres, which it transpired were flat-spotted during the spin – and sent the 21 year-old out.

Davenport went on to demonstrate what the team already knew – they had one of the quickest GT4 cars on the track. At times, he was up to five seconds a lap faster than any other GT4 car and the car remained quick throughout his stint, consistently setting the class pace. By the time he reached the chequered flag, the team recorded a finish in sixth place in GT4.

Commenting, Chris Tolman said; “Confidence was high as we arrived at Spa. We were struggling a bit in free practice until we found and resolved the issues with the car and once we had done that, it all came good. We had the pace we thought we would have and perhaps, a little more to boot.

“Again, we were the quickest Ginetta there and we seemed to have the measure of the Aston Martins as well, which was very pleasing. It was only the Lotus that was on par with us, which I am really pleased about.

“I think perhaps had we pitted David a lap earlier, we might have made up some more time under the safety car but it’s all about learning and for us, that is the goal of this year. More than anything, I am really pleased that we have massive pace in the car.”

Davenport said; “Spa was another example of the quality and depth of the work ethic within Tolman Motorsport. We had unusual mechanical issues thrown at us during both practice sessions that meant we could not complete the running that our rivals did. However, we went into qualifying and the car was awesome!

“Pole in the PRO category was within touching distance and the race pace was superior to every other car in GT4. David continues to improve leaps and bounds every weekend. I have a very good feeling for our prospects as the season progresses.”

David Pattison said; “Race weekend at Spa – what’s not to like and be excited about! It took a while to sort the car and we didn’t have the best of luck in the race but I felt I was consistent and competitive. The team performed brilliantly and Luke was, as ever, consistently blisteringly fast. Overall, I loved the privilege that is driving at Spa.”

The next round of the series returns to mainland UK and the circuit at Brands Hatch in Kent, over the weekend of 1-2 August.