Furst was a class act in the Donington rain 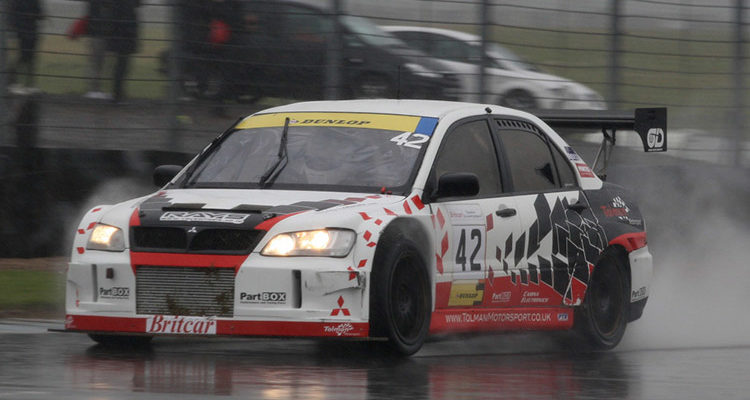 The Tolman Motorsport team arrived at a surprisingly warm and dry Donington Park with the Mitsubishi Evo IX for the Britcar Trophy. The car now sporting a reworked front bumper to aid engine and brake cooling. Driver Gary Furst put in some steady laps during the qualifying session and after a few minor set-up changes finished a credible P8 and 2nd in class.

As predicted, race 1 was incredibly wet. Gary made a terrific start scything through the field and by lap 5 was in the lead overall with the Mitsubishi proving its worth in the slippery conditions. A small mistake at Redgate saw Gary head into the gravel but amazingly he managed to get the car back out on the track, however this was to cause the premature end of the race as gravel got in to the oil pump drive belt causing a failure resulting in the engines control systems turning the engine off for safety.

Race 2 saw Gary starting from the back of the grid in yet another totally wet race, Gary soon made his pace known. In atrocious conditions he fought his way through the entire pack to finish an incredible 2nd overall and 1st in class, beaten only by a GT3 Lamborghini!!

Towards the end of the race the track did start to dry out in one of the best races in Britcar trophy this year, The top 3 cars were trading fastest lap times as each crossed the line in the final half a dozen laps.