Lotus 19 shines at the Silverstone Classic 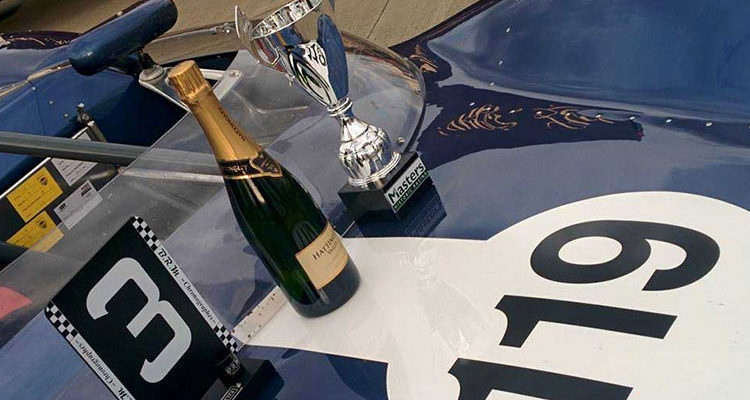 The Tolman Motorsport team arrived at the Silverstone Classic with high hopes after successful tests with their Lotus 19. During practise, the initial runs proved that there was good pace in the car with a small improvement found by increasing front brake bias. The team found that tyre wear had increased due to this faster pace as the car was now capable of lapping the GP circuit in 2:21.2s and with new tyres, this would decrease the times further.

Qualifying weather conditions were very wet with the previous session running under the safety car. New rear tyres were fitted as they were the only ones available from Dunlop but the front tyres were very bad giving virtually no grip so a processional 3 laps per driver followed, under strict instructions to bring car home safely. The team eventually qualified 31st from 38 starters and 5th in class.

Davenport started the race in glorious sunshine with new rear tyres and a full grid of 38 cars. His stint in the car was calm and collected with just one safety car period. Unfortunately this didn’t allow for his full potential to be realised as there was still oil the track from earlier accidents with Luke having to drive off line to avoid them. The pit stop was clean and carried out in adequate time allowed by the rules with Schryver taking over the helm. Michael’s stint enabled the team to climb up the leader board with the oil now gone and confidence growing in the cars ability. Schryver posted the fastest lap of the race of 2:23.386s with the little Lotus and brought it home an extremely creditable 3rd in Class!, beating all but one of the Ford GT40’s.