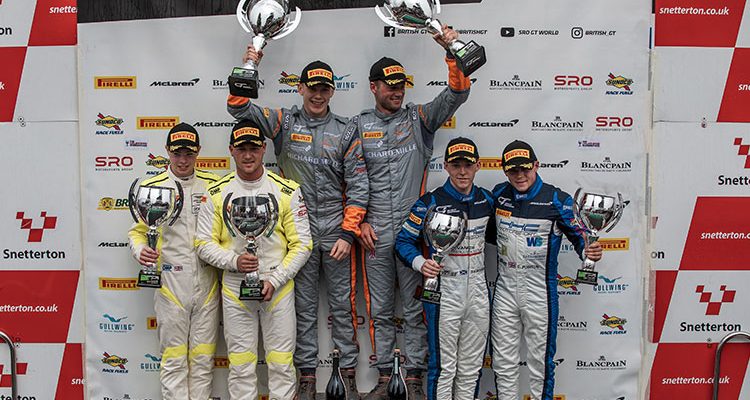 A historic first race win and a double podium gave the McLaren Automotive Driver Development Programme (DDP) and Tolman Motorsport great cause for celebration in Rounds 3 and 4 of the 2019 British GT Championship at Snetterton (18-19 May).

In race one, Josh Smith and James Dorlin led a McLaren DDP two-three in East Anglia, before, in race two, Jordan Collard and Lewis Proctor completed the weekend on the top step of the winners’ rostrum.

In the first of two hour-long races, Tolman Motorsport was a beneficiary of a typically frenetic opening lap.

From P5 on the grid, Cumbria’s Smith stubbornly hung onto championship rival Callum Pointon’s coattails until an opportunity to snatch a podium position presented itself midway through his 30-minute stint.

Proctor, meanwhile, spent most of his seat time in a three-way fight for fifth, the Scot applying unrelenting pressure to stay in the mix while Smith retained third.

At the halfway point swift driver-changes resulted in more gains for Tolman Motorsport, as Dorlin in the #4 McLaren 570S GT4 emerged from the pit window in P2 and Collard in the sister #5 car found himself in fifth with a clear view of the podium once all pit strategies had shaken out.

Dorlin did his utmost to reel in the class-leading Audi and drop the #58 Mercedes-Benz and subsequently took second place, but Collard set personal bests in a successful bid for a top three result, slipping past two rivals on the run to the chequered flag to take the final podium place.

“James (Dorlin) and I did a really solid job to bring home some silverware, and I’m really happy to have achieved good points,” said Smith. “I’m really encouraged by our race pace; I think it bodes well for the rest of the season, and we will be pretty unbeatable if we tidy up our qualifying performances.”

Dorlin added: “Podiums bring good points and that’s what we need from every race, so I’m delighted. In fact, this result almost makes up for the podiums we were denied at Oulton Park. Josh (Smith) had a strong stint that stood us in good stead, then I put in a few quick laps to jump into second. With a few more laps we would have been on terms with the eventual winner, but it’s a good points haul and I’m pleased to be able to share the result with Tolman Motorsport.”

In race two Dorlin was unstoppable, surging from 20th to 13th on the opening tour before picking off seemingly defenceless rivals to trouble the top ten just prior to the compulsory driver-changes.

Smith picked up the baton, carried the same momentum and threatened the top six, only to be hit late in the race with a stop/go penalty for a pit lane infringement. The pair had to settle for ninth place overall.

But for the #5 pairing of Collard and Proctor, race two had a far more positive outcome. Collard drove well from P4 on the grid to keep Tolman Motorsport within the top five for the duration of his stint, but Proctor made an immediate impact when he entered the fray.

Supreme traffic management and clean overtakes helped lift Tolman Motorsport onto the podium, but late penalties and punctures for the two leaders propelled the McLaren Customer Racing Team to the top step of the podium.

With these results, heading into the blue riband event at Silverstone (8-9 June), Tolman Motorsport now lies second in the British GT GT4 Teams’ Championship, Collard and Proctor are second in the GT4 Drivers’ standings and Smith and Dorlin fourth.

“I’m so happy to be on the podium in both races and it’s especially satisfying that one of those was in celebration of a win,” said Proctor. “We were targeting fourth in race one and victory in race two coming into the weekend, so we exceeded our expectations. It is very early days but this definitely focuses our attention on the championship title.”

Collard said: “You always set high goals for the weekend, but these results have put a big grin on my face. It’s fantastic to have McLarens up there on the rostrum in both races – it’s good for the brand, the DDP programme and Tolman Motorsport, and I’m incredibly thankful to everybody who has made this possible.”

Tolman Motorsport Team Principal, Christopher Tolman, said: “Podiums and a victory are fantastic results and I’m extremely happy for each of our drivers and everybody involved with the McLaren Driver Development Programme and Tolman Motorsport. It’s redemption for the podiums we were denied at Oulton Park and shows how much our drivers have progressed, but it’s also really satisfying to see McLaren well represented on both podiums at Snetterton.”