Osborne and Pattison team-up at Tolman with McLaren GT4 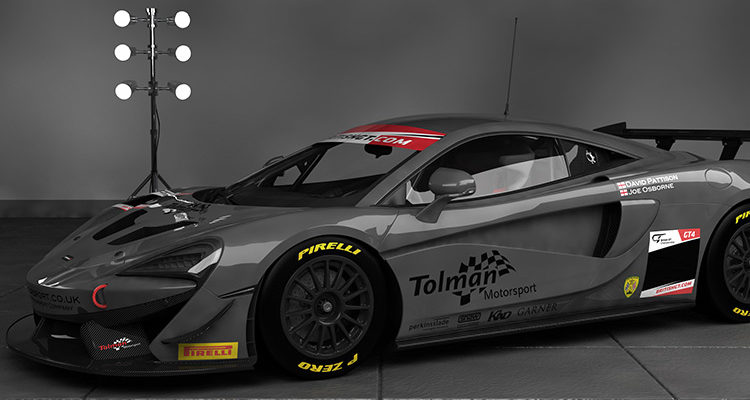 “I’m delighted to be finally racing with ‘coach’ Joe. I came to racing very late, fulfilling a lifetime ambition. Joe has been instrumental in my progress, and I am hungry to learn more. Having driven the McLaren I feel confident that we have a very good car.” said Pattison.

“Joe has coached me over the last four years , but to race with him and be supported by Tolman in the first McLaren 570S GT4 for a customer team is fantastic. It feels like a very good team. Its my third year in British GT and I really like the format. Benjamin, Lauren and the rest of the SRO team do a brilliant job. I can’t wait.”

After six years of GT3 experience, the move to return to GT4 for Osborne is clearer than it seems. A strong advocate of British GT, and one of its most consistent finishers, the 27-year-old believes GT4 is where the best racing and competition will be in 2017.

“It’s been seven years since I raced in GT4, but in 2017 it will be more competitive than this season, with more manufacturer variety. Arguably it’ll be better to watch than GT3. The road-version of the McLaren is a car I know well from work I do with the brand outside of racing, so its performance shouldn’t be a big surprise to me,” Osborne said.

“I would say that it’ll be different being lapped again after racing in GT3, but after trying to compete with the new generation cars in the Z4 this season, it probably won’t be much different!”

“Working with Tolman and David will be great. He’s another one of my pupils that I’ve worked with since they first began racing. My partner in GT3, Lee (Mowle), was the same. All of the gent drivers do this as a hobby, so my job is to make them consistent and perform well – David has shown he’s capable of more already and we should be in for a good year.”

While Osborne and Pattison haven’t raced together previously, Pattison and Tolman Motorsport have an enduring relationship that goes back to the racer’s first race weekend in a Ginetta G20 back in 2013. Together they have risen up to British GT4 in 2015 where they took a win together alongside Luke Davenport, finishing third in the Pro/Am championship, before progressing to a challenging year with the Ginetta G55 GT3 in British GT in 2016.

“We’re very pleased to have secured about the best combination of drivers and car that you could assemble for our 2017 British GT campaign,” Tolman Motorsport team principal, Christopher Tolman said.

“We had a great run with Ginetta who have been very good to us, and motorsport, over the years, culminating in us running their GT3 project this season. Tolman Motorsport wants to get to Le Mans in the next 2-3 years and we felt McLaren are the brand to do that with. We’ve already got a good rapport with the team at McLaren and we’re proud to be associated with that name. It’s also a huge honour to be the first customer McLaren GT4 team.”

“We want to be in a position to get good results in 2017 British GT4. I think we have the package to do that. In Joe, we have someone who has helped Tolman Motorsport get to where it is. Alongside him is David who is a fantastic driver and quick learner; it feels like we’re in for a good year.”

With a solid test programme in place ahead of the nine-round 2017 British GT Championship, the team plan to reveal their livery at the series media day in March. The season then kicks off properly with the two 60-minute sprint races at Cheshire’s Oulton Park on the Easter weekend (April 15 – 17).