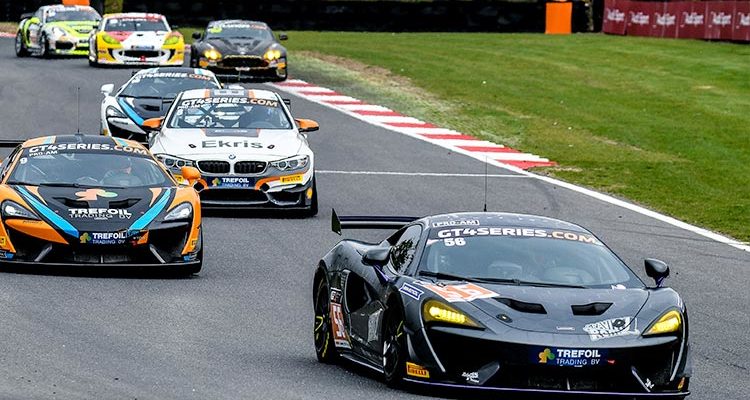 Tolman Motorsport took the European scene by storm last weekend in their McLaren 570S GT4 at Brands Hatch, scoring two top 10 finishes, including an incredible charge up to third place in race one. David Pattison, Joe Osborne and the Tolman crew headed to the Kent circuit to gain some valuable race and track experience ahead of the British GT round, on the famous GP loop, later this year.

The drivers proved their mega pace from the get-go. The #56 stealth McLaren sat at the top of the timing screens for an impressive portion of the first Free Practice session, until it was passed by the #100 Ginetta of Robertson and Hibbert. Domination occurred in FP2 where Pro, Joe, set a mega time of 1:33.767, lapping 0.329s faster than Robertson, which placed the Tolman-run 570S at the front of the 31 strong grid.

Gent driver, Pattison, took the wheel for the first qualifying session. He completed a strong run to lap as the second fastest McLaren, which placed him 18th in class, for the opening race the following day. 2009 GT4 European Champion, Osborne, rocketed up to the sharp end of the grid early on in his qualifying session, to position the team third, for the second European GT4 race.

David took the start of the first one-hour battle, and in spite of his racing time being cut short due to a safety car period, the GT Am had a solid run. Pattison fended off his trailing competitors to bring the McLaren in for the driver change, 21st overall. Following a slick pit stop by the Tolman crew, a supercharged Osborne made light work of his contenders ahead. Despite the safety car being called out on another two occasions throughout the race, Joe crossed the line a mere three seconds behind the victorious #100 Ginetta, in an incredible 4th position overall. The #56 GT4 was promoted to the podium, following a post-race penalty for the #10 Equipe Verschuur McLaren due to overtaking under safety car conditions.

Race two saw another impressive performance by the driver pairing. Joe was first in the hot seat and in true Pro style, he moved straight up to P2 within the first lap. However, he couldn’t seem to touch the immense pace of the Ginetta GT4 and it certainly was not through lack of trying. The team, very tactfully, left Joe out on track for the maximum possible time, which enabled Osborne to hold onto second position, until the mandatory stop occurred. The crew performed yet another impeccable pit stop, and sent Pattison out for his final run of the weekend.

Age is certainly no boundary for the Tolman Gent! Despite being the oldest on the grid, Pattison put up a superb fight against the youthful competition and took the chequered flag, a solid 8th overall. The second stellar performance of the weekend, meant that Tolman Motorsport finished both races as the top performing McLaren 570S.

The team now turn their attention to the third round of the British GT Championship, which takes place at Snetterton in Norfolk on the 27th-28th May.

Joe Osborne – “We went into the weekend using it as valuable track time, ahead of the British GT Round at Brands. Then we became really competitive and we wanted to see how far up the Euro GT4 grid we could finish. I think two top 10 finishes and a podium shows we were very strong! Tolman got on top of the 570S very quickly in the ‘new-to-us’ championship, and gave me the quickest McLaren on the grid by the end of the weekend.”