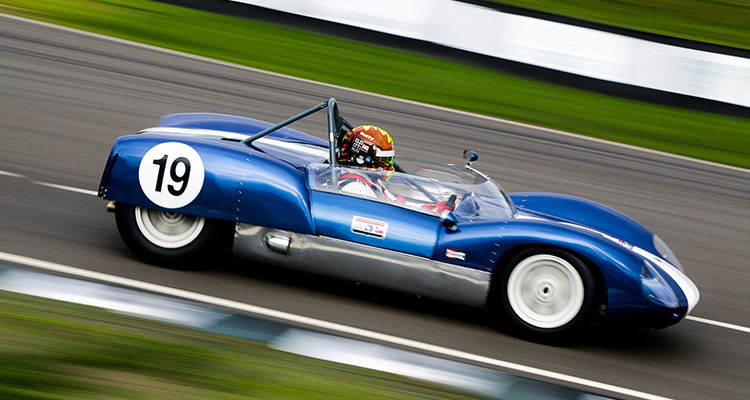 Tolman Motorsport came away from the 2018 Goodwood Revival with a third-place finish in the Lotus 19 Oldsmobile, after touring car ace Rob Huff battled hard in the Whitsun Trophy last weekend.

The 20th edition of the pre-1966 festival saw a 28-strong grid take to the 3.8km-long historic circuit to compete for the Whitsun honors. With no pre-weekend testing at the West Sussex circuit under their belts, it was straight into the official timed practice session for Huff and the Tolman built Lotus 19 recreation.

Huff wasted no time in proving why he is one of the best in the business and was at the sharp end of the timing screen from the get go. Despite having to dance around plenty of traffic and avoid a metre-wide oil spill over much of the circuit, Rob placed the #19 sportscar in P2, almost a second ahead of Darren Turner in the 1965 Hamill SR3.

A stellar start saw Huffy plant the #19 into P1 before the first corner, however it wasn’t long before the power of Mike Whitaker’s 1966 Lola-Chevrolet T70 came into play, and the #46 passed Rob and left the rest of the field far behind.

Some superb defending skills from the world champion saw him hold off Turner for the majority of the 25-minute battle. It was only until the closing stages that Turner was able to make a move into the chicane to pass Rob, and the #19 passed over the line in third position, over 12 seconds clear of James Cottingham in the #23 Ford GT40.

Christopher Tolman – “I am absolutely over the moon with the performance of the car, the driver and everybody involved. Many people doubted our ability in the dry and put our 2016 win down to wet weather conditions. We were always going to be the underdog in the oldest and smallest capacity car, and the smallest car! Mr Ross has committed to a development programme with the Lotus 19 recreation and it paid off, because we were faster and comparable to the other vehicles. Like Rob, Darren Turner is also a world class driver, so it wasn’t just Huffy making all the difference to the result. He makes a huge difference, but he had a good car under him. We aimed for a podium and to get that in our return to Goodwood was fantastic. Hopefully we will get an invite to the Members Meeting and we would love to return to the Revival next year.”