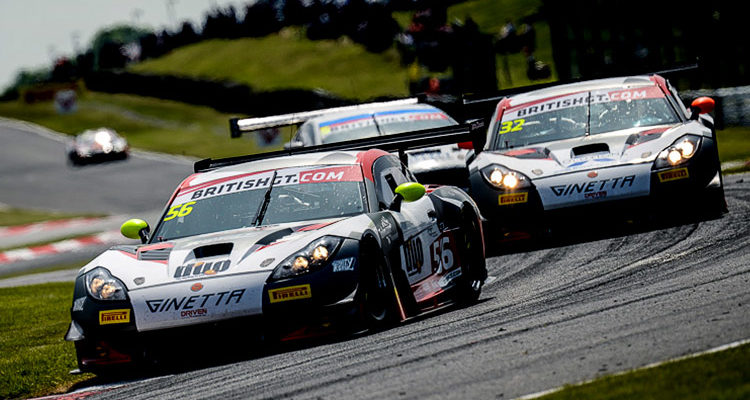 Tolman Motorsport celebrated its best British GT Championship result of the season yesterday at Oulton Park where both of its Ginetta G55 GT3s secured points finishes during the opening race of the day.

David Pattison and Luke Davenport went one better than their previous highest finish of the season to seal ninth in the senior class a little less than one year after securing pole position and fastest lap on theirs and the team’s British GT4 debut at the same Cheshire venue. Meanwhile, the sister car driven by Ian Stinton and Mike Simpson scored its first points of the campaign one spot further back in 10th.

However, the Warwickshire-based Ginetta factory-backed team’s poor run of luck returned during the day’s second hour-long race in which both G55s retired with terminal damage.

Tolman were eager to bounce back from an especially difficult weekend at Rockingham last time out and achieved just that after surviving an action packed third round of the season on Monday morning.

Pattison lined up 13th on the grid for what would be only his third GT3 start and was able to stay out of trouble throughout the opening 25-minute stint while a number of incidents afflicted those around him.

That theme continued when Davenport took the wheel thanks to a raft of pit-stop infringements in the especially tight Oulton pit-lane. the #56 crew suffered no such dramas, though, allowing the 2015 Rookie of the Year to re-enter the fray with a fighting chance of scoring points. And he duly delivered thanks to consistently quick lap times comparable with those of his midfield rivals.

It was a similar story for Stinton and Simpson who, after twice being punted out in the two previous rounds, finally enjoyed a contact-less run throughout to finish where they started. However, it could have been even better for the #32 pairing who picked up a stop/go penalty for being a mere 0.020s under their minimum pit-stop time. Without it they would have most likely finished sixth, but still took the chequered flag just half a second behind Davenport.

After seemingly turning a corner in race one the team’s desperate luck returned for the afternoon’s second encounter.

Simpson’s qualifying efforts saw him line up ninth thanks to a time just 1.2 seconds shy of pole in a class packed with much newer GT3 machinery, while Davenport started three places further back after admitting to not getting the best out of his tyres during Saturday’s short, sharp 10-minute session.

However, neither would make it to their mandatory driver changes after sustaining damage in separate collisions. Simpson’s G55 GT3 suffered a broken driveshaft early in proceedings as part of a purely racing incident involving his team-mate and Ryan Ratcliffe, while Davenport’s subsequent tangle with the GT4 class Beechdean AMR Aston Martin at Knickerbrook put paid to his and Pattison’s hopes.

Nevertheless, not even those frustrating retirements could dampen the spirits of Team Principal Chris Tolman who was happy to see the bigger picture at the end of a generally positive weekend.

“Oulton was by far our best British GT event of the season so far,” he said. “We’ve lacked track time this year, both during testing and in races, but started to get on top of the set-up in free practice and actually made a big step forwards during Monday morning’s warm-up, which set both cars up for a decent first race. Naturally we were frustrated by #32’s stop/go penalty; there’s no room for error with the minimum pit time, and we were a fraction under what was allowed. Two hundredths of a second is basically nothing, so on another day we’d have been fine.

“However, it was still great to finally see both cars get a result. The team have deserved that for all of their hard work behind the scenes. We’re still fighting to catch up with the rest so all points feel like a giant-killing act at the moment. On that note I think we would have been in with a decent shout during race two were it not for the two incidents, but neither myself or the drivers are dwelling on those. We head into the second half of the season with renewed optimism.”

Tolman will be testing again later this week in a bid to further close the gap on their GT3 rivals ahead of British GT’s blue riband three-hour race at Silverstone, which takes place in less than two weeks (June 11/12).