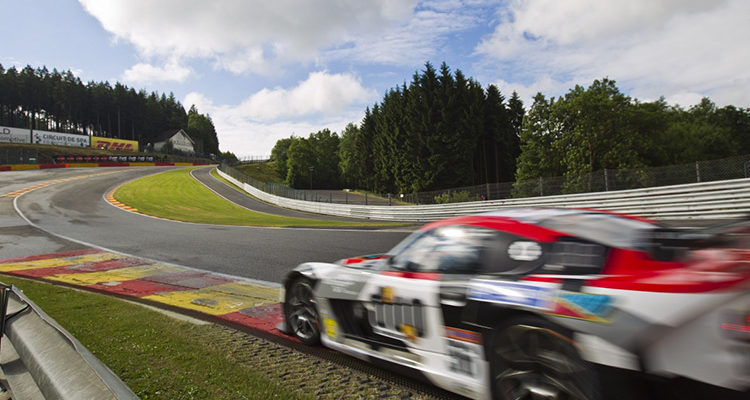 Warwickshire-based Tolman Motorsport believes preparation will be key to success in this weekend’s fourth round of the British GT Championship, taking place at the iconic Spa-Francorchamps circuit in Belgium. The team has tested and recently competed at the circuit and feels it is in the best shape possible for the season’s only venture outside the UK.

The fledgling team, competing in the GT4 category of the British GT Championship with its Ginetta G55 for the first season, has already demonstrated its pace and believes that Spa is another opportunity to capitalise on its potential.

It tested at the circuit earlier on this year and as recently as a few weeks ago, returned to the Belgian circuit to contest a round of the European GT4 Championship as a live test ahead of the British GT round.

Both of those two races were wet, as Spa often is and the team learned a huge amount about managing tyres and wet race craft. Throughout the weekend, the team demonstrated its pace, qualifying 0.6s from pole and a creditable third on the grid for the first race. Qualifying for race two showed just how difficult the famous Spa circuit is, with Pattison pushing and going off into to gravel trap during his stint.

Race one saw Davenport pushing hard and handing over to Pattison from first place. Race two started with a deluge of biblical proportions and a hasty change to wet settings on the grid. The huge challenge of fighting from the back of grid gave the drivers their hardest test yet!

As a result, the team is optimistic about the next round of the British series, taking place this weekend.

Commenting, Team Principal Chris Tolman said; “We had a really good test at Spa earlier on this year with Joe Osborne driving and then, we also had a very useful experience at the European GT4 series. While it might not have been much fun in the wet, we got some incredibly valuable knowledge and data for the team and the drivers gained even more experience of running in the wet.

“I was also very pleased and impressed with the pace at which we were running and I think this hints at what might be possible next weekend.

“In addition, Luke was competing at weekend, with Joe, at the Donington Historic Festival, driving the Lotus 19 we built and developed for a client. While it’s not the Ginetta, it is only four seconds off the Ginetta’s pace at Donington and was another opportunity for some seat-time.”

Luke Davenport said; “I am going into Spa absolutely determined to make up for what could have been at Silverstone. I feel we are the best-prepared team in the GT4 category for this event. There is a feeling of expectation and I cannot wait for it all to get started.

“I have recently returned from competing in the European GT4 Championship at Spa where I lead the race against far more experienced professional drivers. I believe we can finish the race there next week in the same position.”

David Pattison said; “We have learned a huge amount ahead of the race at Spa; particularly about racing in the rain! We do know the car goes well there and Luke was very quick at the European GT4 race weekend. For me, it is my favourite circuit in the world and it is a real privilege to be racing there.

“I think with the preparation work the team has put in, we are in a very good place and I am really looking forward to the weekend.”

The weekend competition begins with two free practice sessions on Friday 10 July before qualifying in the afternoon.

The race itself then runs over two hours, beginning at 12.15 local time on Saturday 11 July, before the weekend’s headline event, the 25-hour VW Fun Cup race which begins at 16.50hrs.