PRO/AM victory and overall podium for Tolman Motorsport at Snetterton 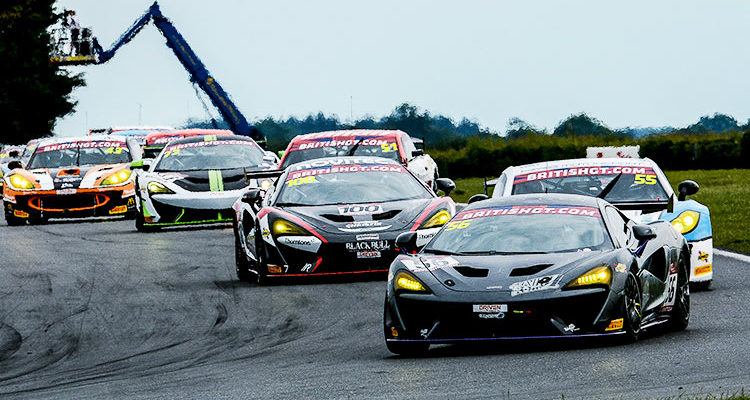 Tolman Motorsport enjoyed huge success, during rounds four and five of the 2017 British GT Championship at Snetterton last weekend. David Pattison, Joe Osborne and the Tolman crew stormed to an overall podium in their McLaren 570S GT4 and achieved two top-three finishes in class, including a superb win and fastest lap in the latter race on Sunday.

Following a third place finish at Brands Hatch for their guest appearance in the European GT4 Series, Tolman Motorsport headed to Norfolk to compete in the second and final double-header of their 2017 British GT campaign.

The team kicked off the weekend with two equally strong performances in free practice and both sessions saw the #56 McLaren place P2 overall and first in the Pro/Am class. Joe sat at the very top of the timesheets for the majority of the first practice session, until Silver graded Middleton in the HHC Motorsport Ginetta, pipped Osborne by 0.005s. The pace was a great reward to the team, as they had been testing various set up changes prior to the weekend, and the majority of both practice sessions were used to get the drivers dialled into the alterations.

One-hour races in British GT have a slightly different qualifying format to the usual aggregated times. The Am driver posts a time for the race one starting spot, and the Pro driver’s fastest lap will position the car for the latter battle. David had adapted to the set up changes very well and qualified P6 in class, a mere half a second from P3. It was then Joe’s turn to do what he does best. On the third lap of his run, Osborne’s time was 0.3s up on the Silver class championship leaders, HHC Motorsport and with that, he parked the McLaren back in the pits, pole position was secured.

David had the honours of taking the start for the first race of the day, and what a start he had! Within four corners of the opening lap, Pattison had charged up to fourth in class from sixth, and began to hold off his trailing competitors. “It was the best start I have ever had”, the gent commented, “I was very proud of my overtake on the Ginetta and pleased that I stayed with those ahead.”

The London-based Am had both elbows out as he continued to defend from the string of cars behind. “I have never properly raced with four other cars before” Pattison said, “with Joe’s brilliant coaching, I am getting to the point where I am quick enough to race with people, rather than just hanging on to them.” David held his ground, and handed the 570S over to Joe, P4 in class, at the pit stop.

Osborne wasted no time in making his way through the field and soon moved up three positions overall, one in the Pro/Am class, and kept pushing towards to sharp end of the grid. The Tolman Pro was gaining on Robinson in the Optimum Motorsport Ginetta by two seconds a lap, and could have potentially caught up with him towards the end of the race. Unfortunately, due to traffic from a much slower GT4 ahead, Joe was denied the opportunity to do so, but brought the #56 McLaren over the line in a very respectable P3 in class and seventh overall. “David gave me the car in a solid position”, commented Osborne, “I was able to push on from there and our pace was good!”

With a podium already in the bag, the team were even more positive about the potential result from a pole position start. “Starting from pole makes my life a bit easier”, Joe stated, “you’re then in control of your own destiny”. Joe made a good, clean start and was able to get his head down, pull away from the competition behind and not get interrupted by the GT3 cars later on in his stint. “It was a fairly normal run, all I had to do was look after the tyres.” The Pro’s superb pace saw him achieve the fastest GT4 lap of the race, which meant that the #56 Tolman 570S had consistently been the fastest McLaren all weekend. “Our pace reiterates the amazing job that the team at Tolman do,” Osborne said, “they have really got on top of the car and it shows in the performance. They are an A* team!”

The McLaren was handed to David with a solid cushion to his GT4 rivals, but unfortunately this was rather short lived, as soon after Pattison has left the pit exit, a safety car was called. This meant that the advantage the Am had over his immediate challengers, all of whom were silver graded, had vanished, and David would have to stick his elbows out once again. “Silver drivers aren’t really a fair fight for David” commented Osborne, “all he needed to do was stay out of trouble!”

Pattison did his best to make it hard for the rapid youngsters to pass, but the three silvers eventually slipped by the #56 to put David fourth overall and he remained first in class. The three GT4s ahead soon became two, as Tregurtha in the #55 Ginetta ended his race in the barriers at Riches. “Once we knew there were only two ahead, it was a case of just bringing her home to the podium” Pattison said. The gent took the chequered flag to seal the overall podium and the class win. “When Joe gave me such a good lead, I was rather terrified” David exclaimed, “it was a slightly odd race, but I’m chuffed to bits to achieve a fantastic points haul for our Pro/Am championship fight.”

Tolman Motorsport are now sitting sixth in the overall standings and third in the Pro/Am championship, only a single point away from the McLaren of Balon and Mackay in second. Team Manager Chris Tolman is over the moon with the results, “this is an accumulation of all the hard work from every person involved. I’m immensely proud of their commitment and these results are perfect pay back.”

It’s a huge learning curve for an Am driver to get used to a new car in a short period of time, but Chris is amazed with Pattison’s progress, “David’s race craft has improved massively and he now has the speed to put him in a position to fight with his rivals. With every session he takes on Joe’s coaching points and acts on them immediately, and Joe is absolutely perfect! He’s faultless with everything he does, which greatly benefits the team’s performance.”

The team now turn their attention to Silverstone in two weeks’ time, where the Tolman McLaren will compete in the blue riband event, the Silverstone 500 (10th-11th June).