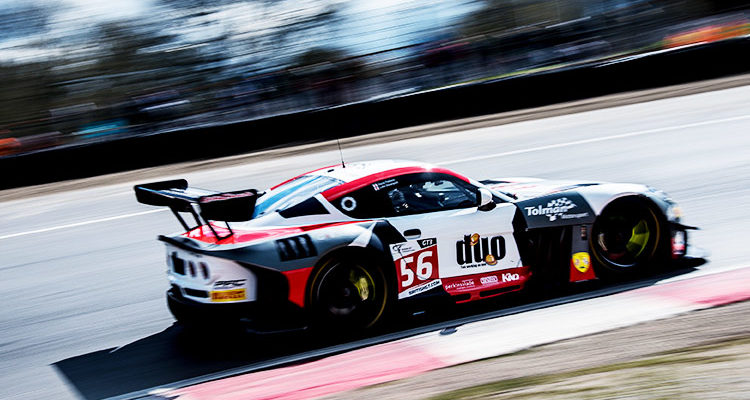 With track conditions much improved from the rainy Friday testing session, the drivers were able to use the cars to their full potential. With the track dried out, Ginetta factory driver Mike Simpson put out some quick times in Free Practice 1, his fastest being 1:26.108. Luke Davenport also got in a good time of 1:27.875. Stinton and Pattison got some competitive times, but couldn’t perform to their full potential due to traffic on track.

Free practice 2 saw some more good times, although the rain came in the last 5 minutes of the session and slowed things down. All the drivers had plenty of time out on track, with good feedback coming back to the team on both cars, putting them in a confident state for qualifying later on in the day.

With the sun coming out for the start of qualifying, things were looking up. Ian Stinton’s time of 1:27.689 was done on his third lap, with very similar times for his following 3 laps of GT3 AM qualifying. David Pattison put out a respectable 1:29.571 on his final lap of 5.

The weather stayed cloudy throughout qualifying, as it had been for most of the weekend. The drivers are still optimistic for the race, knowing they can have faith in the performance of the 2 Ginettas. These times could have been better, but were still very pleasing for the team on their very first GT3 qualifying session.

After being pushed off the track and into a wall on the first lap, Stinton was forced into the pits for repairs. The team managed to repair the damage with amazing coordination and got him back out just 5 laps behind the rest of the pack. When he got back out, he made very good time with his fastest lap being 1:29.528 on lap 9. Unfortunately, after an incident at turn 7 (cause as yet unconfirmed) he was forced to retire from the race. A disappointing end to an otherwise rewarding weekend for both Ian Stinton and Mike Simpson.

Pattison made a good start from 11th on the grid, gaining 2 places despite issues with traffic. He managed 21 full laps before the safety car was bought out after an incident involving 3 cars at turn 7, which continued for his final 6 laps. After a driver change during lap 28, Davenport got in some very quick laps after the green flag, the fastest being a 1:27.816. An incident at turn 2 on lap 41 caused him to lose some time but Davenport fought through and managed to secure a top 10 place and 1 point.

Luke Davenport speaking after the race

“We have taken the pace of the Ginetta G55 GT3 car further than ever before. We got some amazing times over the weekend, but we knew the race would be tough. The change from GT4 to GT3 was much more challenging than we thought, with traffic causing more problems than expected. We would have obviously preferred a better result but we are still pleased. The team did a great job with the car, but the race was always going to be hard for us.”

A good start to the weekend was rewarding for the Warwickshire based team. Some good results in qualifying put them in a good position for the race, hoping to achieve a top 10 finish. The team knew the race would be a challenge, and worked tirelessly throughout the entire weekend to ensure every opportunity could be taken. Unfortunate circumstances meant an early retirement for car #32, a disappointing end for both drivers and crew. Luke Davenport managed to maintain the good start David Pattison made and finish the race in 10th place in the GT3 category, securing a point for the team. We have learnt a lot from our first experience in GT3 and will be sure to take this knowledge and pick up our game at Rockingham in 2 weeks time.