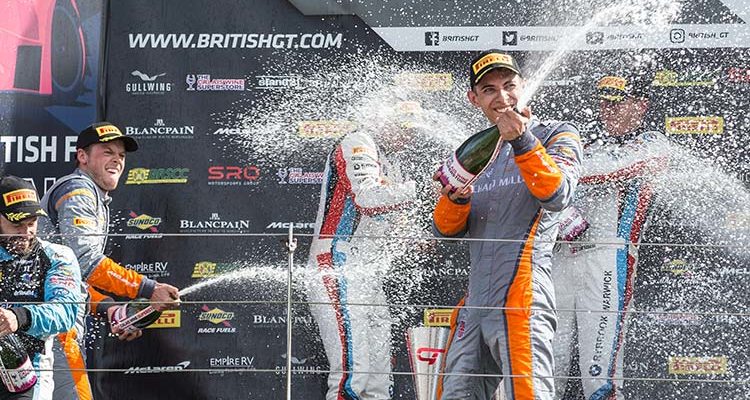 Tolman Motorsport encountered a bitter sweet weekend last week at Silverstone for the British GT Championship’s blue riband event, the Silverstone 500. The #5 McLaren 570S GT4 of Jordan Albert and Lewis Proctor scored their second consecutive podium, after taking the checkered flag in P2 following a hard-fought three-hour battle. Heartbreak came in the form of DNF results for Charlie Fagg and Michael O’Brien in #4 and Joe Osborne and David Pattison in #56, both due to being taken out of the race through contact from their GT4 competitors.

The longest race of the season, held at the Home of British Motor Racing, posed a different challenge for the Tolman Motorsport crew and their trio of McLarens, in the shape of three hours of racing and three mandatory pit stops per car, but with no set pit windows. This meant that strategy and pit stop performance would play a vital role in the result.

Coming off the back of three podium finishes, including a win at Snetterton, and therefore leading the Team’s, Silver and Pro-Am championship standings going into round six, team Tolman were positive about their home race. However, with 150% points at stake, the crew knew there was a lot to gain, but also, an awful lot to lose.

Albert and Proctor stayed at the top end of the time sheets during both free practice sessions, with #4 and #56 finishing both runs within the top eight in their respective classes.

The three-hour format meant the qualifying results would once again be the results of the driver pairing’s aggregated times. For the third time this year, Tolman’s Pro-Am pairing placed their #56 570S 5th in class. Gent driver David commented “Qualifying was good! Joe was a bit disappointed with his performance, but he was very happy with the time I did. Then he looked at it and said, “blimey you could have done even better!” and I know that because I made a mistake on the last corner.”

Jordan Albert set the fastest time of the McLaren Driver Development Programme drivers, when combined with Lewis Proctor’s lap, they placed the #5 machine P5 in class and seventh overall. Fagg and O’Brien in the sister car admitted to having an average run, qualifying P8 in the Silver class and 11th overall.

In similar fashion to Pattison at Snetterton, Proctor flew up the order on the opening lap and the young gun left the team speechless as he went from seventh to first before the GT4 pack reached the Hangar Straight.

David however, did not have the same fortune. Less than half a lap into the three-hour battle, Mark Murfitt in the #77 Fox Motorsport Mercedes made heavy contact with the right rear of #56. Pattison managed to limp the 570S back to the pits, but the damage caused forced the team to retire their Pro-Am entry. A post-race decision was made by the British GT officials to exclude the #77 Mercedes from the race, for the incident with #56. “I guess that’s motorsport. Snetterton couldn’t have gone much better in terms of results and then Silverstone couldn’t have gone any worse” Osborne said. “Out on lap one through no fault of our own is always going to be hard to take. Especially when David has been driving really well all weekend.”

Fagg faced a similar hardship less than 20 laps into the race. Following a strong start, picking off four of his competitors on the opening lap, Charlie was completing a superb first stint in the #4 McLaren. After passing the HHC Ginetta and Academy Aston Martin, Fagg had the run on the #53 Ultra Tek Nissan of Kelvin Fletcher down the Wellington Straight. Charlie had the inside line for Brooklands when Fletcher turned in on #4, launching the rear of the McLaren in the air, breaking the rear suspension and sending Fagg into a spin where he came to rest in the gravel trap. The Stewards immediately issued a two-minute stop-go penalty to the #53, but that was little comfort to the Tolman crew who had a second non-point scoring entry.

Following their 2nd place finish at Snetterton, Albert and Proctor had to serve a 15-second success penalty in their final mandatory stop. Unusually, not a single safety car period occurred within the three-hour race, so the youngsters had to make that time up on track. The Tolman unit performed each pit stop flawlessly, so no time was lost in the pits. The #5 pairing faultlessly pounded round the 3.661-mile, 18-turn circuit as the clock counted down. Albert was the one to bring the McLaren home and despite gaining ground on the #43 Century BMW in the closing stages, the team happily settled for yet another P2 finish. A victory was certainly on the cards had it not been for the success penalty.

Tolman Motorsport continues to lead the Team’s Championship standings, with Fagg/O’Brien now second and Albert/Proctor sixth, in the Silver Class standings. Osborne/Pattison have fallen to fourth in Pro-Am following their DNF, however all three pairings sit within the top-seven of the overall Driver’s Championship.

The team now switch their focus to their flyaway round at Spa Francorchamps in Belgium on the 20th-22nd of July where they will strive to continue their series of podium finishes.

Charlie Fagg #4 – “We can definitely take some positives away from the weekend. I truly believe that even though we had an average qualifying, I had a great initial start and I started to reel in the guys ahead of me. The car handled brilliantly, the set up was perfect. Around 48 minutes in, I went down the inside to overtake and I got hit and put into the gravel with broken suspension, meaning we were out of the race. It was a shame, not only because we were out of the race, but because the team work so hard and Mikey didn’t even get a chance to see what he could do in the longest race of the year. Fortunately, we’ve been doing really well in the Championship so far. Obviously, we would have preferred to score some valuable points, which we would have done, if we didn’t have any contact. I’m looking forward to going to Spa and it would be amazing to get our first win there!”

Michael O’Brien #4 – “I’m just very disappointed with the outcome of this weekend. We’ve been so strong so far this season with two second place finishes and it would have been great to add points to our championship standings at the biggest race of the year. But some things aren’t meant to be. The McLaren once again showed its strong pace, car felt great and the team did a fantastic job. We go again at Spa!”

Jordan Albert #5 – “Finished second in the race which I am very happy with because starting seventh and having a 15 second success penalty to deal with, I think it’s a pretty incredible result from everyone on car #5. I’d like to thank Tolman for the brilliant strategy because of course we had no safety cars to make back that time, but Lewis did a great job, the pit stops were smooth. I was so on my own in the last stint, it was almost as though I was testing. I just had to keep calm and bring it home.”

Lewis Proctor #5 – “I got a fantastic start and jumped up to P1! I held first for a while, then Finlay in another McLaren seemed to have the legs on me in certain areas of the track and he got past and I pretty much stayed there for my long stint. It was just all out to the end to keep it as clean as we could. There were no mistakes in the pit stops, no penalties and we brought it home in second. I think for the car and the BOP that we had for this round at this track is a really good result, I’m delighted. On to Spa!”

Joe Osborne #56 – “Qualifying was a bit average, but we were both confident that we would go forwards in the race and get somewhere near a decent result. David was at no fault in the incident whatsoever and we were punted massively hard and late from the Fox Mercedes. The Race Direction completely cleared David of any blame and British GT did the right thing by their post-race decision.”

David Pattison #56 – “Obviously extremely disappointed that in a three-hour race, people can’t realise that you’re not going to win it on the first lap. The team have been fantastic, we had a problem overnight and they were working until one in the morning. That’s who I feel sorrier for than me and my bank balance! We had a good, strong second half of the season last year, the three circuits we have left are all circuits that we like, and we are strong at. We’ll put this one behind us. I’ve now done four British GT Silverstone 500’s and I’ve only scored points in one of them, so this clearly isn’t supposed to be my race. I also feel very sorry for Charlie and Michael, it definitely wasn’t Charlie’s fault, it was ridiculous.”