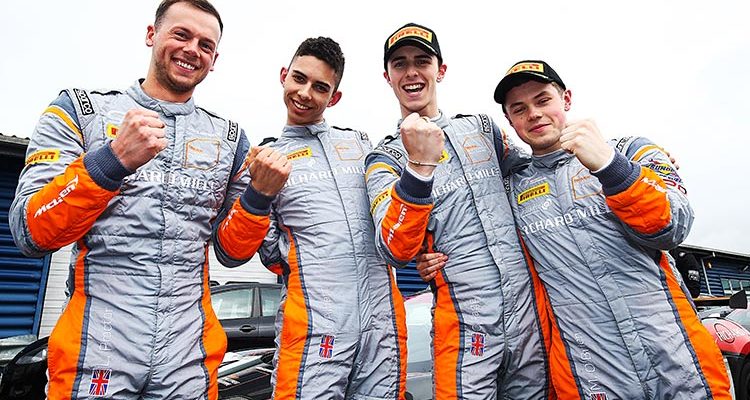 Tolman Motorsport enjoyed a strong showing at Rockingham for round three of the British GT Championship last weekend, where they left as the highest finishing McLaren, with points across the board and moved up to second in the driver’s standings.

The Warwickshire-based team proved their phenomenal pace in the wet, as they locked out the front row with their #4 and #5 McLaren 570S GT4 entries, piloted by Charlie Fagg and Michael O’Brien, and Jordan Albert and Lewis Proctor. They also set the fastest overall lap time in the #56 machine, driven by Joe Osborne and David Pattison, in Saturday’s qualifying session.

Following the abandonment of race two at Oulton Park and some successful testing at the Corby circuit, the Tolman crew were itching to get the weekend started. There was no better way to kick off round three, than by dominating the first free practice session. Not only did the Tolman trio, #4, #5 and #56, end the session first, second and third fastest GT4 cars respectively, they also sat within the top 11 cars on the entire 34-strong British GT3/GT4 grid!

As the weather significantly worsened during FP2, the team made the decision to only complete a handful of laps, as there was very little to be gained from any extra running. All three cars however, still showed great pace.

The focus then turned to qualifying, and after their leading performance in FP1, the team put great pressure on themselves when it mattered, and they certainly delivered as they locked out the front row of the grid and claimed fastest overall lap. The first qualifying session saw Fagg set the fastest lap time, 1.2 seconds ahead of his team mate Lewis Proctor in the sister McLaren who sat in P2. “The wet conditions really helped us, the 1-2 shows how good Tolman are and how good the McLaren is in those conditions” Fagg commented. David Pattison made his way up to 5th in class, but was disappointed with his performance. “It was okay” the Gent said, “it wasn’t helped by having an off on the warm-up lap, which probably threw me off kilter a bit. But I was getting faster by the end.”

Q2 saw yet another 1-2 for Tolman as Pro Osborne soon flew up to the top spot in the #56 570S and posted the fastest GT4 lap, with O’Brien in second position, only 0.3 seconds behind Joe, in #4 and Albert did a great job to place #5 second in the Silver class. The aggregate times saw Fagg and O’Brien sit on pole position by an incredible two seconds, followed by Albert and Proctor in second, and Osborne and Pattison completed the line up placing fifth in Pro Am.

Fagg, Proctor and Pattison took the start of the first two-hour race on the British GT calendar, and all three got off to a strong start despite the challenging, greasy conditions. Fagg in particular, drove with incredible maturity as he held off the rest of the GT4 grid for an hour, to hold onto first place before handing over to O’Brien. Proctor in #5 was involved in plenty of intense battles and showcased some brilliant defensive driving. The Scot was unfortunately hit by both a GT4 Nissan and a GT3 Bentley during his stint, however he continued his strong pace until he came in at the half way mark. Tolman Am Pattison’s performance was nothing short of amazing. After being hit off by a Team Hard Ginetta and going two laps down whilst being recovered, David drove around the huge issues caused by the contact. His ability to race the car with substantial damage was exceptional for an amateur racer.

Rockingham was the first round where the Tolman crew would have to fully service three cars during the mandatory pit stop and they performed all three flawlessly, which left O’Brien heading back out still in the lead aboard #4. Osborne instantly reported how badly #56 had been damaged, which left the team praising Pattison even more for his performance during his stint.

Due to the BOP given, the significant weight of the GT4 McLaren makes Rockingham an unfavourable circuit, as it’s hard to get the car stopped around the multiple, tight twists and turns. This, along with the heavy defending that young guns O’Brien and Albert had to do, meant both #4 and #5 suffered from substantial tyre degradation and whilst Osborne was nursing #56 to the flag, to ensure maximum Pro Am points were claimed, the Tolman youngsters were fighting to hold their positions. O’Brien, who was competing in only his second ever GT race, dealt with the huge pressure from his fellow competitors to bring #4 home P5 overall and P3 in the Silver class. After some strong overtakes on the Academy Aston, the Invictus Jaguar and then on his way to hunt down a Century M4, Albert struggled to push anymore as the tyres began to drop away, and crossed the line in a very respectable P8 and P6 in Silver class. Unbelievably, Osborne brought the battle scarred #56 to the chequered flag to take P7 in Pro Am.

The team now turn their attention to this weekend at Brands Hatch where David Pattison and Joe Osborne will make a guest appearance in the European GT4 at Brands Hatch. British GT action will resume at Snetterton for the Tolman Trio on May 26/27.

Christopher Tolman Team Manager – “The team did an outstandingly brilliant job. The chassis dynamics of the McLaren shows how good the car is in the wet, which is a good leveller for everybody, and then when the track dried, the BOP we have been give showed it’s hand. We are still very quick, but you can’t sustain that when you have nearly two tonnes of weight to drag round. The only only reason #4 lost a lot of time is because the HHC car pitted under safety car. Every single person went above and beyond. I had a chance this weekend to stand back and look at everything that’s here and what we’ve got and how good it is.”

Charlie Fagg #4 – “Pole position by two seconds, you cannot ask for more. It dried up on Sunday, and we knew we’d struggle with that. It was a constant battle to keep the #55 Ginetta behind me, I did for an hour, which for me is a big win! It was one of those races you look back on and think that was really good, everything you did had to be perfect, you couldn’t lose a tenth anywhere because it would bite you really hard.”

Michael O’Brien #4 – “We were the top finishing McLaren which was important for points in the championship. It was really hard to fend off the Aston and the Nissan as I kept having to look behind. It was a tough race but we’ve learnt a lot and I’m looking forward to the next one.”

Jordan Albert #5 – “Lewis did a good job throughout his stint, there was a bit of contact with a couple of cars which was unfortunate and the steering was slightly out when I got in. The pit stops were flawless, and I hopped in and pushed on. Pace at the start was really good, but unfortunately towards the end the tyres started to go off, which seemed to have happened to all of the McLaren’s. Tolman and McLaren have done a great job it’s brilliant to have some more points in the bag.”

Lewis Proctor #5 – “I got quite greedy in my final quali lap in the wet conditions and overshot the first hairpin coming through the banking. But the lap prior to that, was enough to get P2, so we’ve got a really good car in the wet. Fantastic on the brakes and the traction out is really good! I had some really scrappy intense battles, but it was all good for my learning and experience. We’re in the points and we now need to look ahead to Snetterton, which hopefully we’ll get some consistent weather for!”

Joe Osborne #56 – “The race was going to plan up until David got hit and he downplayed it a lot about how bad the car was. As soon as I got in, even pulling out of the box I knew it was going to be a long hour just to trundle round and make sure we got some points. It was good to see how good the marshals are with blue flags. But just as you’re dosing off, they wave a blue flag at you and you look in your mirror and get out of the way, so that was a new dynamic for me that I haven’t had in motorsport before!”

David Pattison #56 – “We had a good start in the race – made up a couple of places and stayed on the back of the pack that I’d like to think that I can compete with. I was knocked off, which I don’t think was my fault and then from there, the rear right wheel was at a funny angle and the steering wheel was about 45 degrees out. Going through turn one was scary because there was a huge vibration on the car! But, we needed to get the car home so I did my best.”