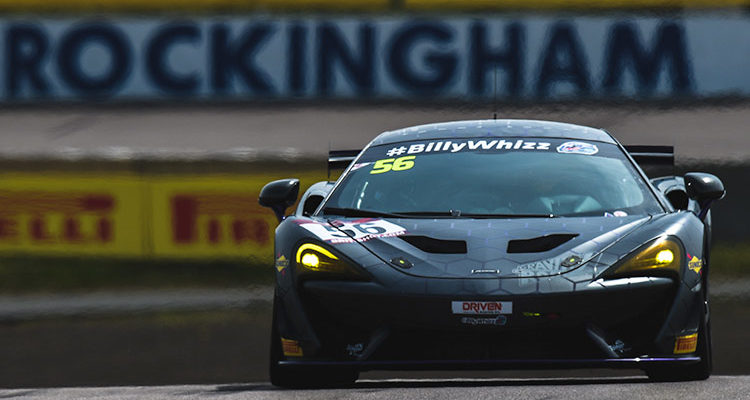 The Tolman Motorsport crew have come away from Rockingham Motor Speedway with a second place finish in the GT4 Pro/Am class, at the second round of the 2017 British GT Championship. Despite the two-hour battle being marred by frustrating safety car periods, Am driver David Pattison took the start from P2 in Pro/Am, completing a faultless stint in the McLaren 570S GT4, which continued his run of superb performances throughout the weekend.

After an unfortunate end to race two at the season opener at Oulton Park, the drivers were looking forward to getting back in the hot seat, to show what they are really capable of. They did not disappoint. During the free practice sessions on the Tuesday, David truly came into his own. “Joe knows what I need” commented Pattison, “after each run, we would come in, download the data, analyse it, Joe would tell me where I would need to improve next, and I went out and did it!” David significantly bettered himself lap on lap, and the #56 McLaren ended FP1 and FP2 in second and third position overall, respectively.

Qualifying saw David complete the lap of his life! The Tolman Am finished his outstanding qualifying run P4 in Pro/Am, which is the best result Pattison has achieved is his GT racing career. Joe did a superb job to settle P3 in the Pro session, only 0.178 seconds shy of the top spot, and a nail biting four thousandths of a second away from second position.

Pattison took the controls of the stealth fighter 570S for the start of the two-hour enduro. “I’ll admit, I felt really nervous” said David, “but as soon as we got going, I was fine.” Pattison stuck to the rear of Will Moore in the Academy Motorsport Aston ahead, preparing for the lights to go green. “As soon as I could, I put my foot down and kept up with the leading pack, abandoning the GT4s behind me. This took so much pressure off and I could really get my head down and get stuck in.”

The gent had an untroubled stint, and the team were thrilled with Pattison’s run. “I kept up with drivers I don’t normally stay with!” the Am stated. “My times were consistent, four Pro racers were behind me and only one got past. I felt good!”

Disappointingly, a safety car was called shortly after the leading GT3 car had passed two GT4 cars, including the #56 McLaren. This meant that the rest of the GT4 grid who were ahead of David on the road, could catch up to the back of the train and effectively, gain almost a full lap advantage. Nevertheless, Pattison brought the car in at the pit stop window, in P7 overall, to hand over to Joe.

“David didn’t put a foot wrong”, commented Osborne. “His qualifying and race pace shows just how far he’s come on as a driver. The fact that David was the second quickest GT4 Am, really is the highlight of my weekend.”

A fired up Osborne didn’t waste any time in attempting to make up the unfair disadvantage that the team had been ‘gifted’. It only took until turn two for Osborne to pull a brilliant move, down the inside of a rival GT4 Ginetta. “I was really happy with the car and its race pace” Osborne said, “the team have got their heads around the McLaren more and more. We’re making some big steps forward.”

Rotten luck struck once more when yet another safety car was called. Following a few laps, Pittard in the Lanan Racing Ginetta, who was ahead of Osborne, was waved passed the safety car. This enabled the GT4 competitor to gain a further advantage over the Tolman 570S. Osborne could only go on the defensive, as his rivals ahead were too far up the road, for him to be able to gain any further positions. Joe brought the #56 McLaren over the finish line, P2 in class and P7 overall. A fantastic achievement by the entire team.

Team Manager Chris Tolman commented “For me, its a team effort. You don’t get anywhere without amazing people.” Tolman was really pleased with the team’s performance, “there was not one single issue all weekend. We were quicker than the factory run cars and everything came together, apart from the luck of the draw with the safety car.”

After showcasing his great pace, Pattison reflected on the weekend. “Rockingham is a funny one. Everyone says they don’t like it, but it is a real challenge!” The gent stated, “I’m still getting used to doing a full hour in the car, its a long time for me! It truly has been one of my best ever race weekends.”

The Tolman Motorsport crew will head to Brands Hatch next weekend to compete in the GT4 European Series, before preparing for the third round of the British GT Championship at Snetterton later this month.