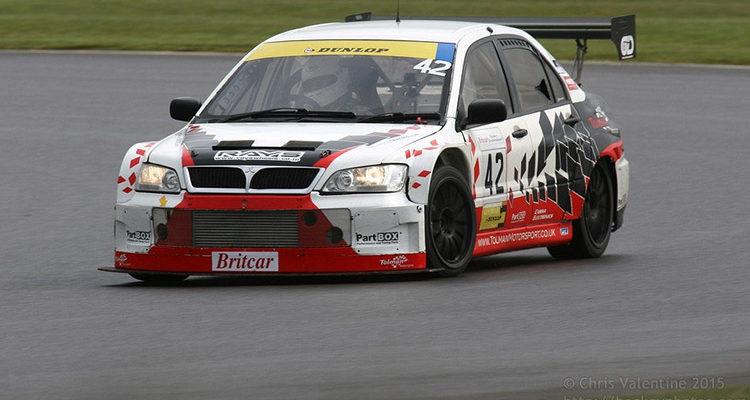 This weekend’s opening Britcar Trophy round at Silverstone saw a superb season debut for the Tolman Motorsport-developed and run Mitsubishi Lancer Evo9 of Gary Furst.

The team has been developing the car for several years and on the basis of this weekend’s performance, would seem to have it working well.

Furst qualified third on the grid for the first of the day’s two Britcar Trophy races, behind the GT4 specification of Aston Martin and a GT3-spec McLaren MP4-C. However, due to various circumstances, he actually started the race from pole position.

Although Furst was alone in his car, he was still obliged to make a pit stop but remain stationary, to allow time for other cars to change drivers and not suffer a disadvantage.

By the time the 45-minute/38-lap race was over, Furst had maintained his qualifying position and finished third overall and first in Class 3. While the Aston Martin, running in the same class as Furst, had started from the pit-lane, the Ferrari 458 of John Seale and the McLaren of the Gibson brothers had passed him during the race to claim the overall win and second respectively.

The second race of the day saw Furst again start from third on the grid, after the finishing positions from the first race. He held this position to the flag, with a fierce battle ahead between the Ferrari and the McLaren and the Aston Martin charging hard behind.

Commenting, Managing Director Chris Tolman said; “I’m delighted with this weekend’s performance. We’ve been working very hard over the winter to develop not only the car’s pace but also, reliability and this weekend shows that we have achieved both.

“Gary ran without any problems at all and put in a superb performance, staying out of trouble and getting the most out of the car. He was extremely consistent and the result is clear to see.”