‘Team of the Weekend’ Tolman Motorsport battles back at Brands 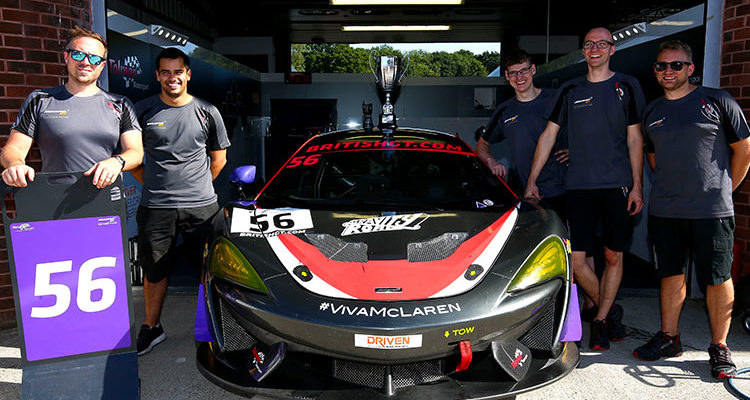 The Tolman Motorsport team experienced a tough few days at the penultimate round of the 2018 British GT Championship, at a scorching hot Brands Hatch last weekend. A storm from the back of the grid to fifth overall and another point scoring finish sees them remain in the fight for the Team’s and Driver’s Championships.

Tolman’s weekend kicked off with a strong showing in the first free practice session with the #4 and #5 McLaren 570S GT4s of Charlie Fagg, Michael O’Brien, Jordan Albert and Lewis Proctor finishing the run first and third in class respectively. The story was slightly different for the #56 of David Pattison and Joe Osborne, as early in the session it became apparent that the car was suffering from a technical issue beyond the team’s control and would require a complete engine change.

Two weekends after their all-nighter at Spa, the team had to prepare themselves for a repeat performance. The #56 crew promptly set about their Pro-Am machine and with another 5am finish, missing FP2 and qualifying, the team returned to the track during warm-up but would have to start the race from the back of the grid. The superb dedication shown by the Tolman boys was yet again recognised by the British GT Championship and they were awarded with the ‘Team of the Weekend’ trophy for the second meeting in a row.

Qualifying for the sister McLarens was challenging due to the unfavorable Balance of Performance for this particular round. Nevertheless, after pushing hard to keep up with the untouchable BMWs, Fagg and O’Brien’s aggregate time placed #4 in fourth overall, with Albert and Proctor sat eighth in the Silver class aboard their #5 machine. The three starting drivers, Fagg, Pattison and Proctor, all had storming starts and made up positions on the opening lap. Lewis picked off the HHC Ginetta and the Team Parker Racing Mercedes and put his head down to continue the progress. Unfortunately, contact from a GT3 Aston soon halted Proctor’s advances, as radiator damage forced the McLaren Automotive Driver Development Programme driver to retire.

Our Gent Pattison had the most successful opening stint of his career and despite two safety car periods delaying further progression, David made up seven positions before handing over to Pro Joe. When David got out of his #56 McLaren, it was obvious to the team how hard he had worked throughout his stint and everyone was hopeful for a strong result to make the lack of sleep worthwhile!

Sitting in third, young gun Fagg was caught in a BMW/Aston Martin sandwich and did a stellar job to fend off the Academy Motorsport duo behind whilst making progress to the pair of Century Beemers ahead. Some battles early in the race had left various bits of debris strewn across the 3.9-kilometer-long circuit and unluckily, Charlie had picked up a piece on his rear right wheel on his final lap, causing a sudden puncture through one of the fastest corners of the track. Fagg lost some time but did well to control the 570S and nurse it back to the pits for the driver change. A superb stop from the Tolman crew meant not a second was lost whilst repairing the damage caused by the puncture.

On top of #4’s 15 second success penalty from Spa, the recently extended pit stop time for the Silver/Silver pairings meant that O’Brien was jumped by multiple Pro-Am racers and headed back on track in 12th. With the Championship in mind, Michael made his way up the order to 9th to secure valuable points.

After being handed #56 in a solid position, Joe carved his way further up the order, but had to manage the deteriorating brakes to bring the car home in an impressive 5th overall, from stone dead last.

Team Tolman now have their eyes on the finale at Donington in September and are ready to push hard to achieve the top Championship spots.

Christopher Tolman Team Manager – “David and Joe’s drive from the back of the grid to 5th overall is a fantastic achievement and very deserving. We had a BoP that wasn’t favorable to the McLaren’s at this event, but we were still the fastest McLaren out there, so that was great. Charlie and Mikey’s success penalty from Spa, added to the increased penalty for Silver/Silver made it almost impossible to get anywhere! I have the hardest working team in the pitlane, and for what seems like little reward right now.”

Charlie Fagg #4 – “We had a good start to the weekend with FP1 and FP2. Being well within the mix meant we thought we would have really good race pace and that was very positive for us. Qualifying was a scruffy session and it was difficult to get a proper lap in, but I did an okay job and that was good enough for fourth. Mikey backed that up which meant we started fourth overall. I had a good start, got into third. The BMWs were very fast, but I just kept trying to hunt them down, using the traffic to my advantage. Unfortunately, right at the end of my stint, I picked up some debris on my rear right tyre and suffered a big puncture. It was a real shame because we were looking quite good for at least a top five result. But we brought it home in P9, one of the ‘what could have been’ races. We maybe didn’t have the most favourable BoP. We need a break, maybe a bit of rain? That would really help us!”

Michael O’Brien #4 – “I knew the track coming into the weekend, so I wasn’t too worried about not having recently tested. Straight away we were up there in FP1 on new tyres and even in FP2 I think our used tyre pace was good as well. Qualifying, we were able to get up amongst it in the top four which was good. Then the race was a bit mixed for us, we were running well but the safety cars didn’t really help us with the Silver/Silver combination. Then we picked up a puncture just before the pit stop, which dropped us. From there we finished 9th and picked up a few points. Every point counts as we’re still in with a chance of the championship so now we’re looking forward to Donington.”

Jordan Albert #5 – “Another disappointing weekend for us, it has to be said. Not getting to drive in the race is really frustrating, two rounds in a row now. Qualifying could have been better. I definitely could have done a better lap, I didn’t quite hook up all my sectors which was annoying. I know what happened and I reviewed it thoroughly. So, starting P10, we were really determined to push forward, and Lewis made a good start by making up two places on the first lap. Then about 30 minutes in, Lewis unfortunately had contact from a GT3 car so that put us out of the race with radiator damage, it was a real shame. But, it was a lovely track to drive, one of my favourites! On to Donington, looking to have a strong end to the year getting the car back up to where it should be!”

Lewis Proctor #5 – “Got off to a really good start in FP1 and FP2 considering this was my first time at Brands. I know the car quite well from this season, but the track is a very unique circuit. It’s very difficult, technical, flowing and you need to know where everything goes. I was a bit disappointed with qualifying and we were quite out of position for the start of the race in 10th. I knew that going into the race I had to be attacking from the get go! I had a good start but couldn’t use my momentum as I was blocked by the Mercedes, but I gained a place on the Ginetta into turn one. Kept it clean round turn two and then got the Mercedes out of turn three, so we were sitting P8. I relaxed into the race but was still learning with every lap. Then there was contact between me and the GT3 lapping me. It was unfortunate that it dislodged to radiator where I was hit in the rear right corner and it threw fluid all over my tyre which caused me to spin a few times and then the car was going to overheat if I didn’t pit. So, we had to retire after that. There’s some positives to draw on the weekend and learn from. We’ve got a good few weeks off before the final round at Donington, which is a track I’m comfortable at. We’re going to try and go out with a bang!”

Joe Osborne #56 – “Having a terminal issue during FP1 set our weekend early on. But the boys Martin, Andreas, Anthony, Neil and Rob made sure we had a car for race day. Basically doing 3 normal days in 2! Big thanks to McLaren for their help. The race was always going to be hard starting last. David did well picking off plenty of cars the most I’ve ever seen him overtake. My stint was fairly uneventful, our BoP was definitely not optimal which meant I was never going to be able to challenge for a podium.”

David Pattison #56 – “From a personal perspective, it was first time coming back to a race weekend since the accident we had at Spa. We felt prepared coming into the weekend, but I wasn’t sure how I was going to react in the car. But actually, when I did get in the car it was fine. For the team to have to be tested yet again in terms of the new engine being required, which meant we missed pretty much all of FP1, all of FP2 and qualifying, meant all the ‘testing’ we had done at the Euro GT4 round didn’t really help us. The guys did a great job and McLaren were really helpful! To go from 20th on the grid to 5th was pretty good. I’ve never done as many overtakes in a race as I did this time. Which was fun! But I was exhausted when I got out, even though we’d had quite a lot of safety car time. Joe had to nurse the car home as the brakes got very hot – we had this last year at Brands Hatch. All the safety car starts are quite stressful, you must be in the right place. Overall, I think the race was a race we needed i.e. progress, a finish and some points. But Saturday was not what we needed. It’s a step forward.”