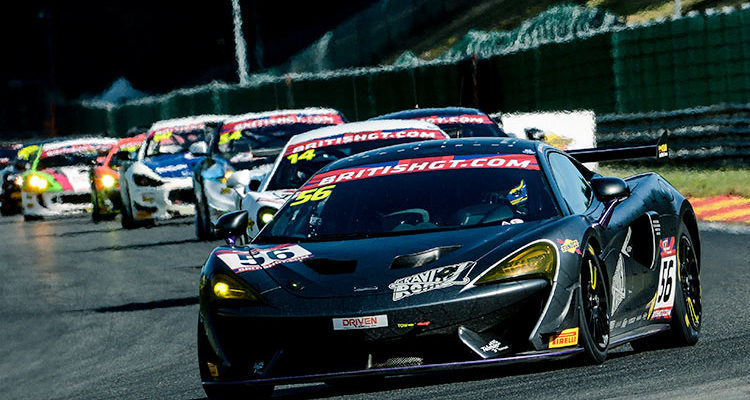 Tolman Motorsport secured their second Pro/Am win and overall podium of the year, at Spa Francorchamps last weekend in their McLaren 570S GT4. The Warwickshire based team moved up to second position in the Pro/Am standings of the British GT Championship, after the driver pairing of David Pattison and Joe Osborne scored strong points in both races around the Ardennes.

This year there was a change to the regular format and instead of the usual two-hour enduro, the British GT line up would take to the starting grid twice, in two, one-hour races. The fly away round of the championship always seems to be a hit with most racers, “I’m always excited about coming to Spa, it’s a fantastic circuit!” commented Pattison, “because we’re the support race, everything is slightly shambolic, but that adds to it’s charm I guess”. With a bumper grid of 34 cars, 20 of these being GT4, the two 60-minute Belgian battles were set to be a great test of the team’s performance.

The free practice sessions on the Friday morning saw the Tolman 570S run as the fastest McLaren of seven entered, a regular occurrence for the team this season. The second session of the day saw Osborne complete only one flying lap, which was enough to set the quickest McLaren time. For Gent driver David, the second free practice run wasn’t as positive as he would have hoped, he commented “FP2 was a disaster, I just couldn’t get the car to do anything.” However, Pro Joe had no concerns about his Am team mate’s times, “due to the age of our tyres and eventually having to run a mixed set, David was a little unsure of his position in the food chain, but that was fine.”

Qualifying for the one-hour races sees the Am driver set a time for race one, and the Pro, a time for race two. Pattison surprised himself by his performance, “after not feeling great about FP2, I had a sleep and then qualifying just felt completely different”. David stated, “I don’t know why, I just got in the car and felt totally relaxed. I found some space, maybe not enough as I ended up semi-racing with Tim Eakin, but even that was quite fun!”. Pattison ran as the third quickest Am racer, 10th overall, a mere seven hundredths of a second behind Eakin in the UltraTek Nissan and less than five tenths back from Marcus Hoggarth, in the In2Racing McLaren. Osborne was more than happy with David’s time, “all year in qualifying David has pulled it out of the bag and this was no different. With hindsight he should have found a bit of a better gap, but if that is the only ‘major negative’, then that proves to everyone what a good job he’s doing.”

Joe wasted no time in switching on for his quali run, “the first flying lap and the only one where I really pushed was enough for pole positon” the Pro said. “Not only have we got the fastest car, but we’ve got the fastest McLaren. So it doesn’t matter what the BOP argument is, if you’ve got the fastest of your car, that’s always cool.” Joe’s lap was 0.157 seconds up on the #100 Black Bull Garage 59 McLaren of Ciaran Haggerty, which was enough to set a new GT4 qualifying record around Spa, by almost a second.

Pattison took to the wheel of the Tolman McLaren for the race one grid and made his best start of the season. David rocketed #56 up from 10th overall to 7th on the opening lap, but unfortunately he was denied the opportunity to progress any further. Due to two separate incidents involving other competitors, the Am spent the rest of his stint behind the safety car. David handed over to Joe on the same lap that the safety car was called in, so the Pro could now get his head down and work his way up the grid. This was made even easier, as a perfect stop by the Tolman crew saw Osborne jump up six positions as he exited the pit lane in first overall. This was about to be the longest half an hour of the team’s season, and despite Joe driving conservatively, he managed to increase his lead by an incredible 14 seconds. With two laps to go, disaster struck and Osborne reported that #56 had suffered a front left puncture. “The race was mega, the car was quick and we had a comfortable lead, but then it all went wrong” the Pro said, “we had to box and change it, which was gutting.” The team’s incredible efforts went unrewarded, and Joe brought the car across the line fifth in class and 12th overall.

The team then regrouped and made alterations ahead of the pole-starting race two. A superb start by Osborne soon saw him pull a gap from his trailing competitors and the Pro held his lead, until the unusually rapid guest entry Maserati of Matthew Graham, had come from dead last on the grid, to second in under half of the race distance. Joe made the very sensible decision to let Graham past, as to not lose any time to the full season entrants behind him. The #56 570S was handed over to Pattison in P2, where the Am spent his stint fending off the William Tregurtha in the #55 HHC Motorsport Ginetta, and the #501 Optimum Motorsport McLaren of Graham Johnson. The Gent did a superb job of holding his ground until a last lap charge from Silver driver Tregurtha, saw David drop down to third overall with two corners to go. “To get two trophies is not a bad weekend and the guys who I used to see as tough competition, I now feel a lot closer to” commented Pattison, “and it is Spa. You can’t moan about driving at Spa!”

With two strong point scoring finishes, the team have jumped up to second in the Pro/Am standings, only 29 points behind Optimum’s Graham Johnson and Mike Robinson, and with two rounds remaining, it is still all to play for.

Team Manager Chris Tolman praised the team’s efforts, “being the fastest McLaren shows that we are pushing and it’s a great achievement for the team” Chris stated. “We were really unlucky to be plagued by a puncture, but that aside, we had a trouble free weekend and you can’t ask for any more than that.”

The Tolman crew now set their sights on round 9 of the BGT which will take place at Brands Hatch on the 5th and 6th of August. The last visit to Kent saw the team score a podium finish at their European GT4 debut and they will be looking to replicate their performance next month.