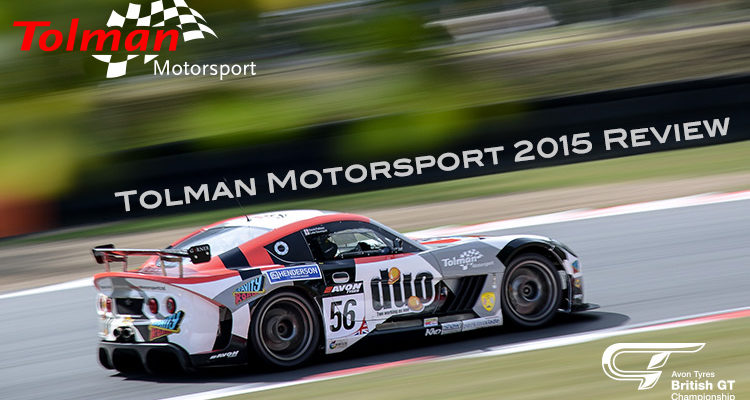 Tolman Motorsports entry in to the 2015 British GT Championship marked the start of a new journey for the Warwickshire based Team. Created by Managing Director Chris Tolman and staffed by industry professionals the team had, until the start of the 2015 season competed only on the lower rungs of the British motorsport ladder. Three seasons in the highly competitive Ginetta GT5 Challenge showed only a fraction of the capacity and experience within the small team, although its commitment and attention to detail always shone through.

British GT is one of the fastest growing championships and the most professional premier race series in the UK. Tolman Motorsport entered in 2015 with no illusions but with a three year plan.; the Brief was a three year plan. year one, gain experience, learn procedures, build team and gather data. Year two; learn some more, push drivers and team, get on the podium and enhance data. Year three; aim to win something.

Tolman Motorsports first season in the British GT Championship has far exceeded their expectations from both the drivers and the team’s perspectives. Challenging for podiums was supposed to be for year two. Winning races year three. The team have showed unequivocally that they have the performance, professionalism, drive and commitment of any of their peers. David Pattison and Luke Davenport outscored all other drivers in the second half of the season and the team did not have one mechanical issue, bringing home a 100% finishing tally.

2015 was only the third year of driving for AM David Pattison, a truly remarkable feat against seasoned drivers and Silver rated Pro’s. His ability to learn and implement new techniques aligned with an appetite for data has seen remarkable improvements in such a short time frame. Season 2 should prove very exciting with his learning curve trajectory!

Luke Davenport has developed into an extremely mature driver for his tender years, his ability to understand the requirements of the gent driver has proved pivotal in the team’s success. His ability to lap consistently, not only faster than the competition but to a managed pace when required underlines his professional approach to the sport. Its not been measured but he must be top of the GT4 overtake league for the season.

The combination of Davenport and Pattison should be a very potent one in 2016!

Tolman Motorsport will be expanding to a two car team for the 2016 British GT Championship and welcome contact from prospective clients.

It was clear from the first round that the driver line up was strong and the car set up delivered pure speed and pace beyond original expectations . For race 1, Bronze driver David Pattison placed the car P10 with vastly more experienced drivers behind him. For race 2, Silver Driver Luke Davenport put the car on Pole first time out P1! Really quick all weekend held the lead all the way through his stint in the car.

Back to earth with a bump very quickly as the reality of the Rockingham and a big change in the BOP (Balance of Performance) proved challenging during practice at this unique UK track. After a huge amount of work P12 was as good as it got in qualifying. Luke was 3 tenths from being the fastest Ginetta, the Aston Martin clearly suited to this track. David also got P12 pushing as hard as possible in the AM qualifying. Combined P12. In the race the car came good and ended yp as the first Ginetta, the fastest Ginetta and the team delivered the fastest pit stop overall.

The team’s first 3 hour race was always going to be a daunting prospect but expectations were high after a great race with an exceptional finish at the Rockingham in the previous round. In qualifying Luke was P4, 2 tenths from the fastest Ginetta, David P12. Combined P11. In the race, sadly on lap 24 Luke had contact with another car whilst pushing for position. Remarkably he was able to get the stricken car back to the pits, whereupon the Team replaced the entire L/H rear corner and refuelled in only 18 mins. Unfortunately this resulted in a zero points score but demonstrated the Teams ability under pressure and the tenacity of the drivers to keep the car running.

It’s always a privilege to race at the famous Spa circuit and this gives the whole event a special feeling. The team and the drivers were in high spirits. A change in the BOP for Spa ensured that the Ginetta’s could once again challenge for overall Honours in the GT4 class. In qualifying Luke was lightening quick with a time just 2 tenths from fastest and 1.7 sec faster than the next Ginetta! David only had one quick qualifying lap as he was taken out by a GT3 driver early in his session. Combined P5. In the race David ‘learned a lot’ after spinning on oil, flat out at Blanchimont and Luke bought the car home in a respectable position, after a terrific drive.

After Silverstone and Spa a mid season review identified areas of weakness for both strategy and development of the team. Changes and improvements were made in preparation for the Brands round. Once again the pace of the car was there. In qualifying Luke was P2 just 2 tenths off pole and David P11. Combined P9. Throughout the year the race pace had always been very good and Brands was no exception. David’s stint was exemplary, lapping the Kent circuit faster than he had ever been. Luke proved once again that he is the class of the field, reeling in the opposition until he reached first place. This was completed with 35 mins still to run! The pace was managed to preserve the car and take minimal risks whilst still pulling out a dominant 14 second lead. A first win and a great day.

Brands had proved the team could win! The improvements had worked, the operation was much slicker than before. The First place meant that for race 1 a 15sec penalty would be imposed on the Pit stop. Luke had a Great Qualifying, P2 just half a tenth from Pole! David P11, 5 of the drivers in front being Silver classified. Both races went perfectly to plan. Given the penalty, sixth in race one was the best that could be achieved and in race two third overall and first Pro Am was a real result in appalling wet conditions. Pit stops were perfect, timings perfect & driver performances perfect! The best overall team result all year.

The last race of the year always brings high hopes but the Tolman team were being realistic with their expectations. In qualifying the pace was fierce in the class, with less than half a second covering the top six in the Pro category! Luke P4, 0.3 behind the Pole sitter. David P14, disappointing in a disrupted qualifying session, nerves probably playing a part with expectations high after three great weekends. Combined P13. In the race a ten second penalty from the Snetterton podium was very influential.

“The biggest success of the year has been putting together the right people, at the right time, to do the best job possible. I am honoured to have such amazing people around me and it’s down to them that we have come so far in such a short space of time. Without doubt, David has travelled the furthest in our journey in the shortest time. We have worked together now for 3 years and next year we are looking for another step forward. Luke has impressed me hugely, in all respects, he fits into the team so well and I am convinced it’s one of the secrets of our success. It helps that he’s massively fast too!”

“What an amazing year. Chris and the Tolman team have been so professional and produced a fast car for Luke to drive really fast and me to continue to learn to drive faster. Chris and Luke have been invaluable in helping me progress and i am loving the challenge. To be able to say that we won a race in British GT, and for it to be my first ever win, is one of the highlights of my life. Importantly its been a lot of fun and i cant wait for 2016.”

“This year has been my finest and most enjoyable season to date. To grow and prosper alongside this incredibly hardworking team has been an absolute pleasure. Tolman Motorsports have furthered my career as a driver, they have given me the opportunity to perform in both modern and historic motorsport events at some of the worlds premier race tracks and I am ever grateful to them for the opportunities. There is great potential in this team and some very exciting options for 2016. Watch this space!”