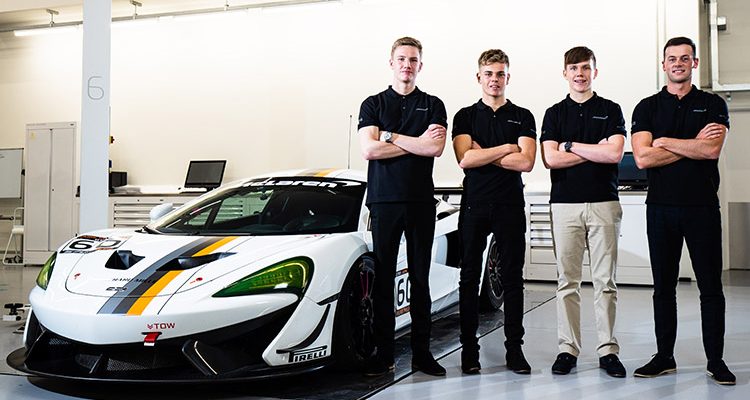 Tolman Motorsport will operate a pair of McLaren 570S GT4s under the McLaren Automotive Driver Development Programme in the 2019 British GT Championship season.

The Warwickshire-based team will welcome James Dorlin, Jordan Collard, Josh Smith and Lewis Proctor – who were recently confirmed for the McLaren Automotive Driver Development Programme in 2019 – for a two-pronged title attack in the British GT Championship’s GT4 class.

In his second year in Britain’s premier one-make saloon car championship, Dorlin qualified on pole position four times, took six race victories – more than any of his rivals – and a further three podium finishes on his way to an eventual second place.

Dorlin, a British Racing Drivers’ Club (BRDC) Rising Star who has also competed in Historic Racing Drivers Club events and at Goodwood, said: “I’m really excited to be part of the McLaren Driver Development Programme. It’s a great opportunity for me to progress my career and to be doing so with McLaren is a real privilege. 2019 is sure to be a massive learning curve but I’m confident we will achieve some very strong results from day one.

“Preparations have been intense and I’m confident we will be the best equipped drivers on the grid come the opening round of the season. I have a fantastic network of people and great resources at my disposal and my goal is to finish on top in the British GT4 standings. Tolman Motorsport came close last year and I hope to make McLaren proud by translating race victories into a championship title.”

However, a successful maiden assault on the 2018 MINI Challenge yielded outright race victories, a third-place finish in the definitive standings and a Rookie Championship win, and it was that performance that piqued McLaren’s interest.

The Hampshire-domiciled teenager will be targeting race wins and the British GT4 title during what will be a pivotal year in his motor racing career, but he’s unwilling to underestimate the challenge he faces in 2019, saying: “Tolman Motorsport had a really strong 2018 season with the McLaren 570S and it’s my intention to keep the team at the sharp end, building on the results it achieved last year while aiming for the top spot in the final championship standings.

“It is a high-pressure year and, being the youngest, I perhaps have the most work to do. However, I really enjoy the pressure; when I’m squeezed, I perform at my best and it keeps me in the zone where I can refine my abilities and extract that last percentage of performance. McLaren and Tolman Motorsport, meanwhile, are masters of reliability, both are driven brands and it’s always good to know I’m not the only one striving to win.”

Smith, aged 19 from Cumbria, is a former X30 Junior World Karting Champion who has MSA Formula and BRSCC Formula Ford 1600 race wins to his name, including a famous victory in the Formula Ford Festival at Brands Hatch.

Much of Smith’s focus has been on adapting his style and approach for GT competition, and he’s looking forward to applying what he has learnt when the season commences at Oulton Park on 20-22 April.

“Although I’m yet to start on-track testing, my preparations have been really good so far,” said Smith. “I’ve been hitting the simulator hard to transition from a single-seater style of driving to an approach that will make me quick in a GT car, primarily sticking to what McLaren has advised me to do.

“While I do have high hopes, I’m not expecting to be the complete package in the season-opener at Oulton Park. Having said that, our predecessors left big boots to fill and I expect to build on their success with Tolman Motorsport, to be in a position to push for the GT4 title come the end of the year.”

Proctor, meanwhile, is no stranger to Tolman Motorsport, having been part of the McLaren Customer Racing team’s 2018 British GT Championship roster.

The 22-year old Aberdonian has only three years of motor racing experience to his name and his rapid rise from club-level competition in a Ford Fiesta XR2 to the GT Cup ultimately earned him a coveted spot in McLaren’s inaugural Driver Development line-up in 2018.

With teammate Jordan Albert, Proctor took his Tolman Motorsport-prepared McLaren 570S GT4 to second-place results at Silverstone and Snetterton, but the Scot has far more ambitious targets for 2019.

“Last year was my first full season of racing and some of the tracks were completely new to me but being selected for the McLaren Driver Development Programme was a very positive baptism of fire,” said Proctor. “The mentorship, facilities and resources, paired with my own work ethic and eagerness to learn, meant I progressed in leaps and bounds. As a result, I take a lot of confidence from 2018 and I really feel I can hit the ground running this year, given that I know the McLaren 570S GT4 and the British GT race weekend format so well, and there’s continuity with Tolman Motorsport. With all that, I expect improved pace, more podiums and race wins and a shot at the GT4 title.”

Tolman Motorsport Team Principal, Christopher Tolman, said: “We are really proud to be continuing our relationship with McLaren Automotive on the Driver Development Programme in the British GT Championship’s GT4 class. This will be Tolman Motorsport’s fifth season in British GT and the third with the McLaren 570S GT4. We understand the series, the car, have a proven ability to prepare the most competitive cars and offer a nurturing, professional and competitive environment in which young racing talents can thrive. McLaren has supplied us with a strong package in the 570S GT4, their confidence in our skills and a crop of quick young drivers in James Dorlin, Jordan Collard, Josh Smith and Lewis Proctor. The drivers’ respective achievements in motorsport show they’re all talented and we’re relishing the opportunity to develop and maximise their potential in 2019, which we hope will yield race wins and championship titles.”

McLaren Automotive Motorsport Director, Dan Walmsley, said: “Now entering only its second year, the Driver Development Programme had an immediate impact, and proved an extremely successful platform for nurturing young talent within motorsport. We continue to look at ways to promote and support young talent, and will be working closely with the drivers throughout the season across a variety of disciplines to ensure they are fully prepared, both physically and mentally, for everything the world of motorsport has to throw at them. I am really excited by this year’s intake, with all four of them showing real potential and extremely eager to get the season underway and challenge for race results. It is also great to confirm that the drivers will be working with the team at Tolman Motorsport again in the British GT championship, who will be running the two 570S GT4s, and I am confident that Jordan, James, Josh and Lewis, combined with the skills and abilities shown previously by Tolman Motorsport will prove to be a strong combination from the start of the season.”