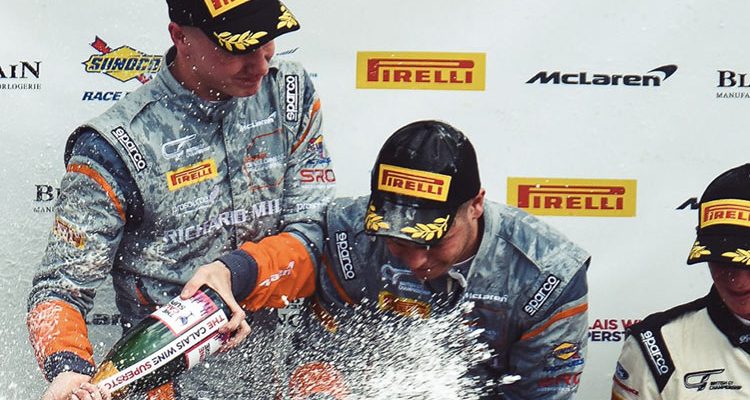 The pace appeared to be there from the outset of free practice on Saturday, although it was hard to take anything from the timesheets, with tiny margins separating the entire GT4 field.

Tolman Motorsport – a McLaren Customer Racing team – ended FP1 in seventh and tenth and it was Smith and Dorlin in the #4 McLaren 570S GT4 who led the charge from the outset, including in the two-part GT4 Qualifying session.

The Smith-Dorlin duo set the fourth fastest combined time to secure a spot on row two of the grid, but the former was quick to improve on that position, rising to second as the field dipped into Paddock Hill Bend at the start of Sunday’s two-hour race.

Between Tolman Motorsport and victory stood the #97 Aston Martin Vantage. Cumbria’s Smith applied unrelenting pressure in a bid to force an error, but lapped comfortably in second place, knowing his rival would have to serve a 20-second penalty in the compulsory driver changes.

Meanwhile, further back, Lewis Proctor and Jordan Collard in the 15th-placed #5 car were targeting a large haul of points that would keep them in the title fight going into next month’s British GT ‘Donington Decider’ (14-15 September).

During a strong opening stint, Proctor worked his way up to eighth. The Aberdonian was on the cusp of the top ten on lap two but went on to pass the #11 Aston Martin and then execute an opportunistic overtake on the #66 Mercedes-Benz AMG on the long drag between Surtees and Hawthorn Bend.

However, the first hour was punctuated by a drawn-out Safety Car intervention that lasted almost 20 minutes and, while the neutralisation gave Smith some respite, it proved costly for Proctor and Collard in the sister #5 McLaren.

Having been lapped by the race leading GT3 contenders, Proctor was caught up behind the Safety Car and lost almost an entire lap to the top seven GT4 runners, who were all allowed to catch the back of the train.

It was a harsh and unlucky turn of events and, with little or no opportunity to gain further ground, Proctor was resigned to defending his eighth place at the restart.

Frustratingly, he and Collard would fall further to 14th during the pit window, the early Safety Car, having bunched up the field, amplifying the impact of their 15-second success penalty.

After the stops, Tolman Motorsport retained P2 with the #4 570S GT4, now in Dorlin’s hands.

A second Safety Car enabled the #62 Aston Martin to minimise its time loss in the pits and leap into P1 with a healthy 30-second advantage.

However, the #62 entry would spin out of the race and pass the initiative to a grateful Dorlin, who had the #5 car of Collard – a lap down and on course for an 11th-place finish – providing an effective buffer between him and second place.

Yorkshire-based Dorlin kept his head while out in the lead and completed a faultless team performance, converting his and Smith’s long-held race-winning potential into a breakthrough victory that keeps Tolman Motorsport at the top of the British GT Teams’ Championship with an increased 29-point cushion.

“This win has been a long time coming,” said Dorlin. “It’s nice that we have won a race where luck has been on our side, rather than simply leading from the front, because we proved a point that we’ve been capable of moving forward and achieving this result from the start of the season. It’s a testament to all the hard work that has gone into this season, and the fact that everybody at Tolman Motorsport and the McLaren Automotive Driver Development Programme have kept their chins up when things have gone against us. This is redemption and it’s great to reward the guys on the #4 McLaren after our run of misfortune.”

Smith added: “This win feels right and well deserved, because we’ve had it coming for three or so race meetings now. The monkey’s off our backs – we’ve finally done it – and I’m absolutely buzzing. My stint was seamless, as I used a good start to get into P2 and then simply held position. It would have been nice to get ahead of the #97 Aston Martin because he was holding me up, but it wasn’t worth taking any unnecessary risks. I passed the car to James (Dorlin) in a good state and he did the job. I feel we had a point to prove, because we’ve been saying for a while that we’re going to win races, and everything went our way at Brands Hatch. We just need to roll this on to Donington Park and continue showing what we can do.”

Tolman Motorsport Team Principal, Christopher Tolman, said: “This win is really big for Tolman Motorsport and it’s the result of a huge team effort. To bring two cars home is fantastic and car #4 deserved the victory – it’s long overdue for Josh (Smith) and James (Dorlin). I’m disappointed for Lewis (Proctor) and Jordan (Collard) in car #5, as they were extremely unfortunate with the timing of the Safety Car, and that has damaged their chances in the championship, but both drove superbly, and the maturity of Jordan’s drive was exemplary. Once again, the Tolman Motorsport pit crew did the most fantastic job.”