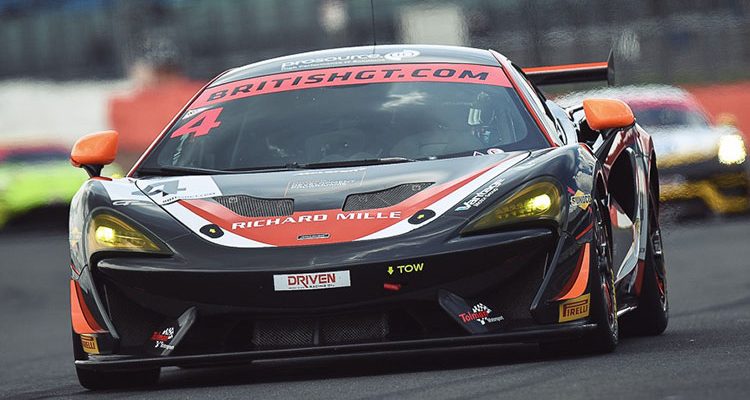 The GT4 title fight is wide open and Tolman Motorsport lies second with a small ten-point deficit to the current Teams’ Championship leaders after five races, which have delivered silverware and misfortune in equal measure.

The McLaren Customer Racing team from Warwickshire has been a regular fixture at the front of the expanding GT4 pack since the beginning and most notably scored 40 of the 50 available points at Snetterton last month.

As a result, the #5 pairing of Jordan Collard and Lewis Proctor are fifth and only seven points away from heading the Drivers’ standings, with the sister #4 duo of James Dorlin and Josh Smith a short way back in P8.

“The approach doesn’t change, because winning every race is an unrealistic ambition,” said Proctor. “History shows that you win titles by being consistent; there are so many variables that make British GT races close and exciting and the main priority for us drivers is to get on top of our own abilities and focus wholeheartedly on being consistent and playing the long game.”

The McLaren DDP quartet are pushing on with their development between races, perfecting their talents during long simulator sessions with their coaches, who mimic high-pressure qualifying and race situations to ensure they’re prepared for every eventuality.

Proctor added: “Now we’re into the single-race weekends it’s crucial to maximise every session, make sure everything is well-oiled and we avoid penalties. There’s some work for me to do to push the tyres to their ultimate potential in qualifying, and I’m hoping for dry conditions so I can get my eye in early at Donington Park. I’ll be starting the race too, and I hope we won’t have many places to make up and my job will simply be to get into a rhythm and keep a clean nose so the car is undamaged for Jordan (Collard).”

On paper, fast and flowing circuits like Donington Park suit the McLaren 570S GT4, and for Dorlin and Smith, the only objective is to break their race wins duck after retiring from the lead in the Silverstone 500.

Both are confident they have the tools to overcome the opposition and overturn the 26-second pit stop penalty each Silver Cup pairing will serve during Sunday’s two-hour race, to climb back up the championship standings.

“We’ve had a couple of podiums and another would be nice, but it would be silly to not give it everything and go for that first win, which we really deserve,” said Dorlin. “We know we have a competitive car in the McLaren 570S GT4, but it’s hard to tell how strong you’ll be prior to endurance race weekends – so much can happen, as we found at Silverstone. Despite that, we’re still only 17 points behind halfway through the season, so we will be taking the same approach, doing as much as we can to maximise qualifying so we have a head start in the race.”

Tolman Motorsport Team Principal, Christopher Tolman, said: “We were really unlucky at Silverstone, but we’re still in a good place in the championship with plenty of time to overturn the points gap. In motorsport certain things are out of your control, but we have regrouped and feel we’re fully prepared, and the strong results we deserve are achievable if we just do our job as before, making sure we’re well-drilled in the pits, we avoid penalties and the drivers run cleanly on the track.”