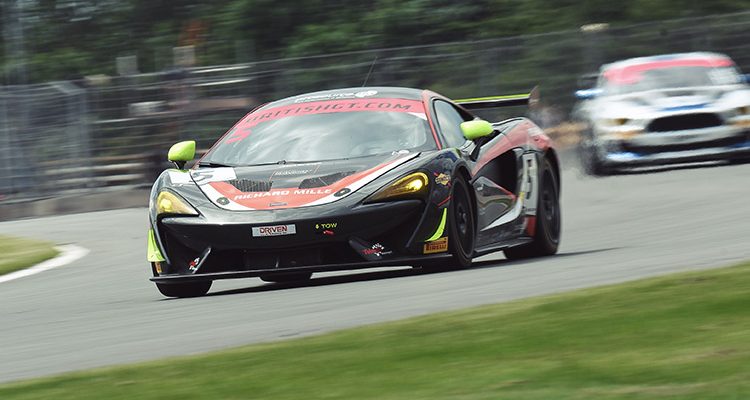 Tolman Motorsport and the McLaren Automotive Driver Development Programme (DDP) are in contention for 2019 British GT Championship titles going into the final round of the season at Donington Park (14-15 September).

The McLaren Customer Racing Team has one hand on the GT4 Teams’ Championship trophy, as it sits at the top of the standings with a 29-point cushion over its nearest rival, with 64.5 points available in Sunday’s ‘Donington Decider’.

In the GT4 Drivers’ Championship, both the #4 and #5 pairings are still in with a chance of taking the title heading to the season finale. However, there is still work to be done if Tolman Motorsport’s McLaren DDP recruits are to be successful.

Currently, Lewis Proctor and Jordan Collard head the Tolman Motorsport-McLaren DDP charge in fourth, and while there are several permutations, the #4 pairing must at the very least finish inside the top three, well ahead of the five other crews who still have a mathematical shot at the title.

It isn’t lost on Proctor and Collard that they have an opportunity to make history as the first McLaren DDP drivers to win the British GT Championship and the first pairing ever to overturn a points deficit at the final round since GT4’s inception in 2008.

“It would be great for McLaren, Jordan (Collard) and myself to get that cherry on the cake, but it’s something you have to be realistic about,” said Proctor. “I try to keep thoughts about the championship out of mind and focus on what I can do to improve my own performance. I’m feeling good and I’m trying to be as balanced and neutral as possible, thinking about the things I love about the race weekends and doing my utmost for McLaren and Tolman Motorsport, which work so hard to give us a race-winning car.

“Donington Park is a good circuit for me and we got some really good learning in during a recent test day. All four Tolman Motorsport-McLaren DDP drivers were close, especially on new-tyre runs, but there’s still a bit to find and I’m looking forward to getting to work in free practice.”

For Josh Smith and James Dorlin in the #5 McLaren 570S GT4, the two-hour season finale at Donington Park is a must-win race to stand any chance of securing the GT4 Drivers’ Championship.

The duo won last time out at Brands Hatch to keep their title hopes alive, reducing the gap to the current championship leaders to 33 points. Both Smith and Dorlin appreciate that it will be a very tall order to close this gap, but are determined to maximise efforts with a key focus on moving up the championship order from where they currently sit, in fifth.

“We arrive at the last round of the championship with an outside chance at the title, which is a great position to be in, but my approach to the weekend will be the same as it has been throughout the whole season,” said Smith. “I am determined to end the season on a high, and will push to achieve another strong result, looking to build on the win from last time out. The 20-second success penalty will make things interesting, but I am confident in the car and setup we have and that James and I are in the best position to overcome the challenge for the last time this season.”

“I’m really hungry to get back in the car and I go to Donington Park with a lot of confidence, as I recently had my best test day of the year. I had the pace on the British GT Championship’s last visit to the circuit, but I found an extra gear in testing; everything clicked, as I felt more comfortable than ever in the McLaren 570S GT4, I was quickest during my qualifying sims and fast in my race runs too. It puts me on the front foot and I’m sure we can go even better than before.”

The Silver Cup is also up for grabs in the 2019 finale – the 300th British GT Championship race – and Tolman Motorsport’s chances rest solely with Proctor and Collard, who must push for victory and simply hope their challengers score small in the East Midlands.

Tolman Motorsport Team Principal, Christopher Tolman, said: “Everybody at Tolman Motorsport is extremely excited about the British GT Championship ‘Donington Decider’. It is a testament to the efforts of the whole team and McLaren that we arrive at Donington Park still in with a chance of claiming all three titles: the Teams’ and Drivers’ Championships as well as the Silver Cup. However, the competition has been fierce all year and we take nothing for granted. We’ve had our fair share of bad luck this season and we know we have a long race ahead of us. The team has been on it all year, so we just need to take the same approach at Donington Park and hope everything comes together.”