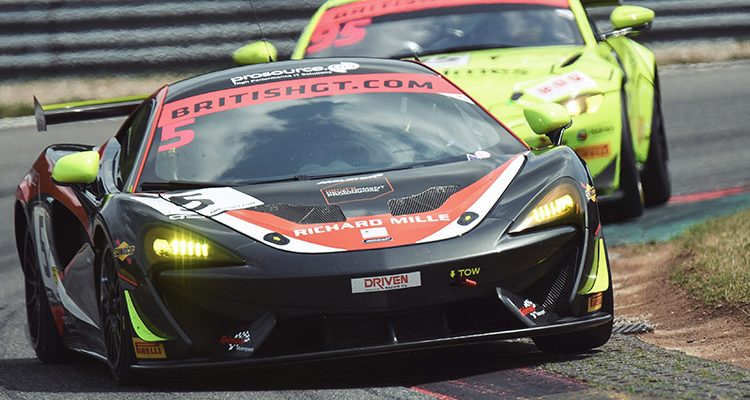 For Tolman Motorsport and the McLaren Automotive Driver Development Programme (DDP), the aim is to carry their pace forward into the eighth and penultimate round of the 2019 British GT Championship on the Brands Hatch Grand Prix circuit (3-4 August).

After finishing runner-up with Jordan Collard and Lewis Proctor in the British GT Championship’s overseas trip to Circuit de Spa-Francorchamps, Tolman Motorsport is first in the Teams’ classification with two races remaining at Brands Hatch and Donington Park.

The McLaren Customer Racing team has had pace all year long and moves forward into the last-but-one round of the season with the intention of consolidating its points lead over the chasing Ford and Aston Martin squads.

The Spa podium also promoted Collard and Proctor to second in the GT4 Drivers’ standings and their first priority will be to maximise their qualifying performance to ensure they’re in the frame for a strong points finish that will keep them in play for the GT4 title going into the season finale at Donington Park, where they have already had success.

“Lewis (Proctor) and I have some momentum and I feel we maximised what we had in the last round at Spa, especially when you consider we carried a pit stop success penalty,” said Collard. “The season is going well and racing from seventh on the grid to second at Spa is something I’m really happy with. My performance was strong and the McLaren 570S GT4 was on top form, which I hope will carry forward to Brands Hatch.

“I really like the circuit – it’s one of my favourites because of the high-commitment corners on the Grand Prix loop – but it it will be a challenge for us. After the result at Spa, the championship leaders have no pit stop penalty and, with very few passing opportunities, it will be crucial to qualify at the front, ahead of our main rivals. We will just have to see what we have in the car at the weekend. The title wasn’t in my mind when we arrived at Spa, but we’ve maximised every opportunity this season and we have to ensure we get a good haul of points to keep the fight alive going back to Donington Park.”

James Dorlin and Josh Smith are yet to see an upturn in fortunes after bowing out of the lead at Spa, but the #4 McLaren DDP pair are resolutely focused on ending the 2019 season with results that reflect their true pace.

“Our race results and championship position don’t do us justice, because we’ve battled for the win in almost every race this season,” said Dorlin. “Josh (Smith) and I are completely focused on ending the season on a high. The aim is to simply carry our race-winning pace forward and achieve some strong, representative results.

“We didn’t achieve our best results during qualifying at the start of the season, but we have identified and made some changes to our set up and our qualifying practices, which should put us in a strong position going forward. Josh and I are now consistently qualifying at the front of the grid, and that’s pretty important at a circuit like Brands Hatch where it’s tight and very difficult to pass. Brands Hatch is actually one of my favourite circuits and I have a good record there. It’s a real old-fashioned driver’s track and I’m really looking forward to tackling it with the McLaren 570S GT4!”

Tolman Motorsport Team Principal, Christopher Tolman, said: “The main aim at Brands Hatch will be to get two cars to the finish. From there, we can hopefully look to extend our lead in the Teams’ Championship, while also taking the initiative in the Drivers’ standings. Qualifying is going to be crucial at Brands Hatch because there are limited overtaking opportunities. Of course, drivers are slightly on the back foot because there’s a lack of testing on the longer Brands Hatch Grand Prix circuit, but we will give them everything they need to maximise the opportunities in qualifying and the race.”