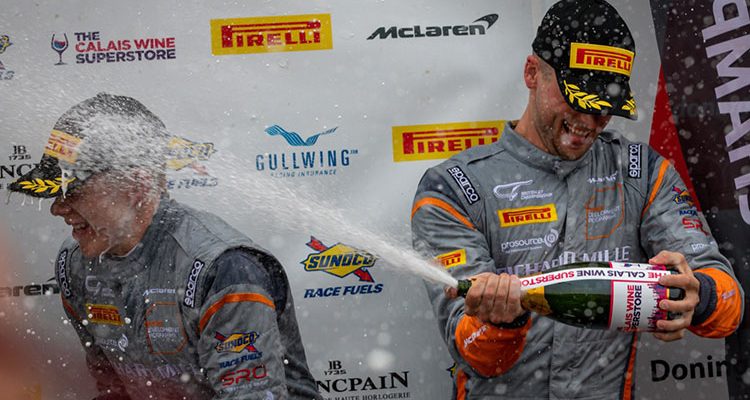 Tolman Motorsport and the McLaren Automotive Driver Development Programme (DDP) reached the podium in Round 6 of the 2019 British GT Championship on the Donington Park Grand Prix circuit (22-23 June).

Lewis Proctor and Jordan Collard lifted third-place trophies to rise to P3 in the GT4 Drivers’ standings and keep Tolman Motorsport in third in the Teams’ points.

The McLaren Customer Racing team had a relatively understated start to the weekend in the East Midlands, simply concentrating on race preparations rather than chasing headline lap times during two hours of free practice on Saturday.

This approach paid dividends, as drivers reported to have a good balance and their lap times were competitive against a tightly bunched GT4 pack.

Their pace translated to strong performances in the two-part GT4 qualifying session, as the #4 McLaren DDP pairing of James Dorlin and Josh Smith placed Tolman Motorsport on the front row of the grid for the first time in 2019, with the #5 crew of Proctor and Collard securing seventh.

At the start of Sunday’s two-hour race, Smith out-dragged the pole-sitting Ford Mustang of Scott Maxwell on the run to Redgate, completing the pass for P1 by hanging on around the outside of the right-hand turn.

Smith stretched his legs in the early stages but his advantage was all but eliminated by uncooperative lapped traffic halfway through his stint.

The #19 Mustang loomed large in his mirrors and frequently showed its nose, but Smith seemed to have Multimatic Motorsports pegged, managing GT3 traffic well, lapping consistently and dropping into the 1m36s in defence of first place.

Unfortunately, the leading #4 McLaren 570S GT4 sustained race-ending damage when it took a heavy rear-quarter impact from a Lamborghini GT3.

Proctor and Collard in the #5 entry were left to continue Tolman Motorsport’s charge; from seventh on the grid, Proctor passed the #66 Mercedes-Benz AMG GT4 of Nick Jones during a controlled first hour, before Collard emerged from the pit window in fourth.

The Hampshire driver was immediately into the low 1m36s while chasing the HHC Motorsport McLaren of Dean Macdonald, but briefly lost track position to the #29 Audi R8 GT4, which developed an issue just after the second-placed BMW M4 GT4 careered into the barriers, lifting Tolman Motorsport onto the podium.

“We both kept it on the black stuff and brought it home in third place, which we’re really happy about,” said Proctor. “I felt we were slightly out of position in qualifying, and it was tough to manage the temperatures and pace while in a train of cars during the race, but I picked up a position and was mainly focused on keeping the car clean and avoiding penalties for Jordan (Collard). We will take a lot away from this weekend for when we return to Donington Park in September, and I’m really pleased to have scored a decent number of points.”

Collard added: “You have to take every result when they come. We definitely have some work to do, so us drivers and everybody at Tolman Motorsport and McLaren will put their heads together to find a bit more raw pace. The McLaren 570S GT4 is clearly very reliable and, because Lewis (Proctor) and I looked after the car well, we were there to pick up places as others retired. This podium gives us a big boost in the championship and it’s what we needed after Silverstone, but hopefully we can sort out our qualifying performances and start further up the order at Spa so we’re in a position to fight for the top step.”

Tolman Motorsport Team Principal, Christopher Tolman, said: “A podium result is always great and it shows that the McLaren 570S GT4 has pace and longevity. Our drivers drove brilliantly; Jordan (Collard) and Lewis (Proctor) made a significant improvement on their Silverstone performances, and Josh (Smith) drove superbly during his stint – he deserved the win. I’m gutted for him and James (Dorlin), but it’s nice to have recovered a third place finish.”