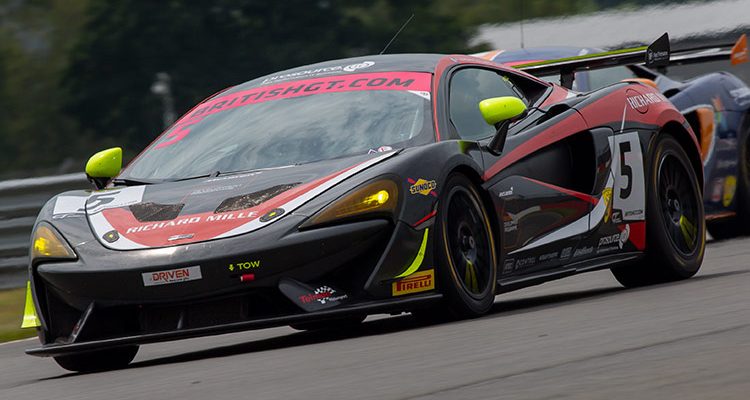 Tolman Motorsport and the McLaren Automotive Driver Development Programme (DDP) have set a course for Circuit de Spa-Francorchamps in Belgium, which hosts Round 7 of the 2019 British GT Championship (20-21 July).

Fortunes were mixed in the latest round of the season at Donington Park, but Tolman Motorsport still translated its winning pace into a podium result with the leading #5 pairing of Jordan Collard and Lewis Proctor.

Heading into the annual British GT ‘flyaway’ at Spa, Collard and Proctor expect the turbocharged McLaren 570S GT4 to come into its own, but the teammates say their first aim is to lead the McLaren charge on the track and in the championship.

“The last race was a bit of a weird one, because Lewis (Proctor) and I lacked some pace as drivers but still managed to come away with a third-place result,” said Collard. “It was a pleasing outcome that brought us right back into the championship fight, and we can definitely repeat or better the finish at Spa, which is a notoriously good circuit for the McLaren 570S GT4. My teammates and I had a positive two-day test at Spa; we achieved all our objectives, testing a load of setups on tyres of different ages, and I really maximised my driving technique, relaxing in the car.

“It’s clear to me that Spa suits the way the McLaren handles, but I also found it to be a cool track to drive. I had never been to the circuit before and it has a bit of everything, from big braking zones at La Source and the Bus Stop to high-speed attacking corners like Eau Rouge and Blanchimont – it’s in those sections where you have to close one eye and hope the best that I thrive! I like to think we can battle for the podium again, but the main aim has to be to close the gap to the top two teams in the standings.”

After six races, Tolman Motorsport has four podiums and one race win to its name and the McLaren Customer Racing team sits third in the GT4 Teams’ Championship, only 17.5 points back from the current leaders.

For Josh Smith and James Dorlin, though, a podium result would transform their season after a run of bad luck. The #4 duo have been in the fight for wins and podiums all season long and are in high spirits, knowing Tolman Motorsport and McLaren will once again give them every opportunity to maximise their potential at Circuit de Spa-Francorchamps.

“As always, we’re confident that we can do a strong job if we aren’t effected by any external factors and we keep our heads down,” said Smith. “I never look for fourth, fifth or sixth-place results, I’m always focused on podiums, and the main aim is to finish as the lead McLaren. Ultimately, James (Dorlin) and I need to keep doing what we’re doing, because Tolman Motorsport has both cars dialled-in to a point where they’re quick wherever we go, and there was also a lot of pace and positive feedback during our two-day test at Spa.

“Spa-Francorchamps is absolutely amazing! People say the track has everything and they’re right; because it’s fast and very technical, you have to put a lot of thought into every corner and that means you can’t even relax on the long straights. I really do expect us to be in the ballpark this weekend.”

Tolman Motorsport Team Principal, Christopher Tolman, said: “The British GT ‘flyway’ at Spa-Francorchamps is always a highlight of the season and I hope we can achieve a decent points haul with both cars this weekend. There’s no doubting our potential – Tolman Motorsport and McLaren have prepared quick and durable cars and the drivers continue to improve – and Spa is a place where we have winning form with the 570S GT4. Our podiums tally is strong and only external factors have prevented us from achieving more, so we should be right up there if trouble stays out of our way.”