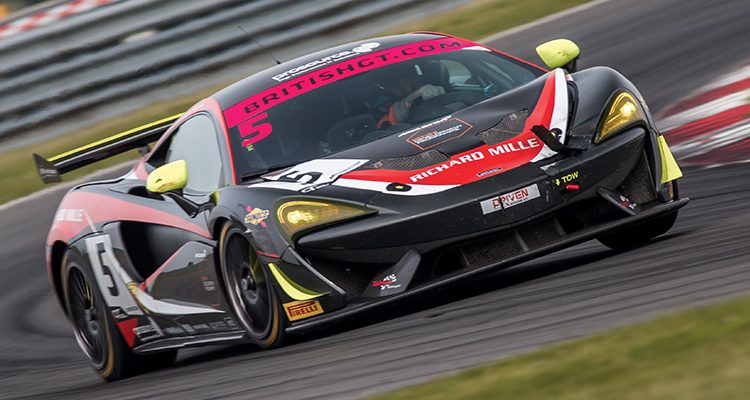 Tolman Motorsport and the McLaren Automotive Driver Development Programme (DDP) move on to the 2019 British GT Silverstone 500 (8-9 June), which marks the start of the championship’s endurance season.

For the first time in 2019, points-and-a-half will be available to the top ten finishers, while three mandatory driver-changes in as many hours place more emphasis on strategy.

Tolman Motorsport – a McLaren Customer Racing Team – is second in the GT4 Teams’ Championship, while Jordan Collard and Lewis Proctor in the #5 McLaren 570S GT4 hold P2 and James Dorlin and Josh Smith in the #4 car lie P4 in the Drivers’ standings.

This Sunday, Collard and Proctor must serve a full 20-second success penalty in their final pit stop after winning race two at Snetterton, and they subsequently believe a repeat victory will be hard to achieve.

However, Tolman Motorsport’s #5 pairing isn’t concerned about reaching the top step of the podium, choosing instead to make consistency the priority for the remainder of the season.

“Championships are won and lost on consistency,” said Collard. “I’ve been racing a long time now and I know you’re so much better off settling for two fourth place finishes rather than making risky moves to take a podium or a race win. We’re only four points away from the championship leaders, and if we focus on being the fastest McLaren and make use of the momentum from Snetterton, we should leave Silverstone at the top of the standings.

“Silverstone is a bit of me – I converted pole into a race win last year and I really like the high-commitment corners like Copse, Maggots and Becketts – and the McLaren 570S GT4 has previously performed well there. We have a full 20-second success penalty to serve in the pit stops, but Lewis (Proctor) and I can make the difference on-track and I know Tolman Motorsport has the best team of people to come up with a detailed plan on how to approach the strategy, which is so important in these longer races.”

Dorlin and Smith, meanwhile, have combined two podiums with a non-score, and are fourth in the standings heading to Silverstone.

The #4 McLaren DDP duo are still keen to achieve a maiden British GT victory and feel the Silverstone Grand Prix circuit will play to the 570S GT4’s strengths, but they also see the importance of running a clean race to score good points.

“We have had the potential for race wins since the start of the season and Josh (Smith) and I are going to Silverstone to break that duck,” said Dorlin. “At the same time, we have to make sure our performances are clean and ensure we bag some really good points. We’ve made a lot of progress through the field in every race so far, so the endurance format should suit both me and Josh, and I also think the circuits that are coming up, particularly Silverstone and Spa-Francorchamps, should suit the McLaren 570S GT4 a little more.”

Tolman Motorsport Team Principal, Christopher Tolman, said: “The Silverstone 500 is by far the longest race our drivers have ever done – it’s three times longer than the four they’ve done this season – and with more points available than before, you lose a lot if you get into trouble or make mistakes. This one is about consistency, especially as we will be against 26 GT4 cars.”