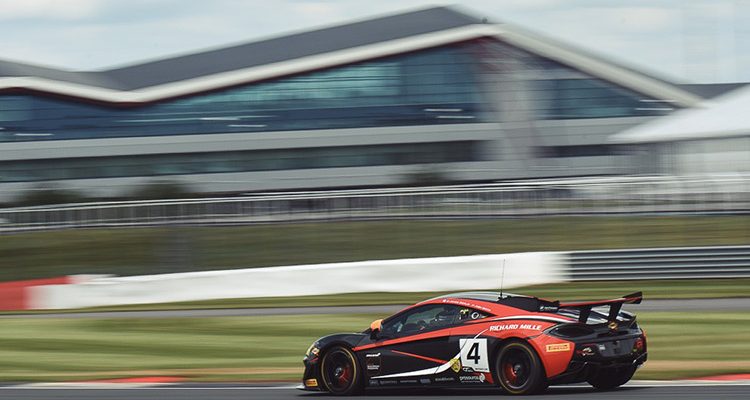 Heavy rain saturated the Silverstone Grand Prix circuit during Friday’s test and Saturday’s free practice sessions, but the Tolman Motorsport McLaren 570S GT4s had pace when the track was at its wettest, and in damp, but drying conditions.

As a result, the McLaren Customer Racing Team ended Friday atop the testing times and then went third fastest in FP1 with the #4 car of James Dorlin and Josh Smith, despite running a reduced programme during the most intense downpours.

The weather stabilised in time for qualifying on Saturday afternoon and the Dorlin-Smith pairing continued to lead the McLaren charge, securing fourth on the GT4 grid, while Jordan Collard and Lewis Proctor in the sister #5 entry were resigned to a place at the tail of the 26-strong field after having their times deleted for track limits infringements.

Nevertheless, three hours of racing lay in store on Sunday afternoon, and Dorlin and Collard made big gains on the opening lap of the British GT Championship’s blue-riband event.

Sadly, Collard’s hard work was undone after just three circuits of Silverstone, when a spinning Aston Martin collided with his McLaren.

The Hampshire driver recovered to the pits and, despite a determined effort by Tolman Motorsport’s mechanics, the damaged #5 entry was ultimately pulled into retirement after a brief reappearance with Proctor at the wheel.

Dorlin, though, had made up two places at the start and twinned speed with consistency to consolidate second position during the first hour, before Smith emerged from the driver-change in P1 and managed his lead over the course of a controlled 60-minute stint in the #4 car.

For Dorlin and Smith, the Silverstone 500 was by far the longest race of their young careers.

Both represented Tolman Motorsport and the McLaren DDP well, driving maturely and hitting their target lap times to maintain the initiative in GT4 for almost two thirds of the 180-minute race, only to be struck by an engine-related issue that left them in 13th in the final classification.

Tolman Motorsport Team Principal, Christopher Tolman, said: “I’m disappointed that we were unable to finish the British GT Silverstone 500, but it was great to see Tolman Motorsport leading the race against such a strong grid. Everybody at Tolman Motorsport and McLaren has worked really hard and performed faultlessly all weekend. The team produced fast cars and the drivers have been quick and impressive in all weathers, and they deserved so much more. It’s unfortunate, but this is motor racing and I can promise that Tolman Motorsport will come back fighting, stronger and more determined than ever at Donington Park.”