Tolman Motorsport claims sixth podium of the season at Spa 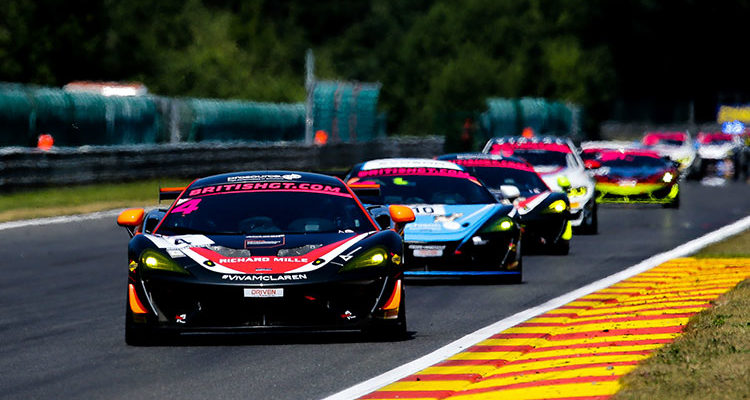 Tolman Motorsport stepped onto the podium once again with the #4 McLaren 570S GT4 of Charlie Fagg and Michael O’Brien last weekend at Spa Francorchamps in Belgium. Following O’Brien’s superb pack-leading stint, a win was almost on the cards. However, after being jumped in the pit stops as their rivals lucked-in with the safety car, Fagg brought the Tolman-run McLaren over the line in second position and achieved the fastest GT4 lap of the race.

The Tolman crew showed their impressive pace from the very start of their fly-away weekend, by finishing 1-2-3 in the first practice session of the day and this was then followed up by Joe Osborne in #56 topping the time sheets in FP2.

Qualifying was the first session to bring the highs and lows of Tolman’s weekend. A huge crash for David Pattison on his first flying lap saw #56’s day end prematurely, but thankfully, David walked away from the incident. After a quick check, Pattison was released by the medical centre and this is testament to McLaren for building incredibly safe cars.

The #4 McLaren of Fagg and O’Brien scored their second pole position of the season, with Albert and Proctor in the sister 570S sitting directly behind them on the grid in third place in Tolman’s #5.

An incredible miracle was performed by Team Tolman on the Saturday night. All technicians descended on the stricken #56 and they worked until 5:30am the following morning, fuelled by Osborne-delivered pizza, to get the car fixed and ready for Sunday’s warm-up session. The Tolman Motorsport crew was rewarded with the ‘Team of the Weekend’ trophy by British GT, for their amazing efforts.

Joe took his ‘Mad Max’-inspired reborn McLaren out for warm up and commented that the car felt brand new. David then took the reigns and did a great job to maintain his pace after the frightening crash.

Michael O’Brien’s opening stint saw him defending hard from the #10 Equipe Verschuur McLaren and the #43 Century Motorsport BMW and the youngster did a stellar job to hold his station until handing over to Fagg at the halfway point. Pattison impressed all as he started from the pit lane and worked his way up to third in Pro-Am from dead last. So it was heart breaking news for the team when he radioed in, on the final lap of his stint, to say the car had gone into neutral and wouldn’t select any gears. #56 had overheated and despite the team’s best efforts to solve the issue via radio communication, David was unable to get the car going and had to retire.

Lewis made a great start and although he was squeezed out of turn one on the first lap, Proctor battled hard for his hour with strong pace to bring the car in for the stop, in fourth. Unfortunately, a fuel fire occurred during #5’s pit stop and Albert was unable to re-join the race. The team are investigating the cause of the incident.

With two retirements for the team, all hopes were pinned on #4 emerging victorious from the two-hour Belgian battle. Fagg left the pits leading the GT4 pack, and shortly after a safety car was called. As the pit stop window was still open, this meant the #43 Century BMW, who was running in second position, could make their stop and emerge almost an entire lap in front of the GT4 grid. Fortunately, Charlie was eventually waved past the safety car and was instantly on a mission to hunt Mitchell’s BMW down.

An incredible stint by the ‘McLaren Automotive Driver Development Programme’ young gun, saw him hot on Jack’s heels with five laps to go. Despite his best efforts, Fagg was unable to pass and brought the #4 home in second position. Charlie’s mega stint was recognised as he was awarded the Sunoco Fastest Lap trophy.

The team are still in the running for both the team’s and driver’s championships and are looking forward to Brands Hatch next week where they will compete in the penultimate round of the 2018 British GT Championship.

Michael O’Brien #4 – ‘It was a good weekend overall. Quickest in FP1 and got pole position. It looked like we were going to win the race, but we just got really unlucky with the safety car. I got a good start and had a great first lap, lot of chaos in the GT3s which brought out the safety car. But I had a really good, consistent stint and kept the #10 McLaren behind. It was hard to break away as he had the tow on the straights, but I had it covered and was pleased with my stint. Another second place, which is good for the championship. Positive weekend and our speed was good. We will try and go one better at Brands!’

Charlie Fagg #4 – “What a weekend! After the bad luck at Silverstone, we really needed to bounce back at Spa. I went into qualifying with a good mindset and I knew that if I put a clean lap together, with the strength of the McLaren’s around Spa, we could be on pole. Mikey went out in the first session and stuck it straight on pole and because its an aggregated time, I needed to make sure I could follow that up, which I did. Getting pole position was great start to the weekend. Mikey lead his stint from start to finish, absolutely perfect! When he came into the pits, he told me that the car felt on fire, and that we could win the race if I kept pushing. Unfortunately, we were jumped in the pits due to the BMW pitting under safety car conditions and gaining a lap on the entire GT4 field. Fortunately, the safety car waved us by, so we were on the same lap, so I pushed hard to catch Jack Mitchell. Unfortunately, he was quick where he needed to be and didn’t make any mistakes. All in all, getting pole position, fastest lap, quickest in FP1, it was a nice weekend and sets good momentum for Brands Hatch where hopefully we can continue our success. We are back in the championship fight and I know we can do this!”

Jordan Albert #5 – “Really enjoyed my time here, it’s such an amazing track. The McLarens have been really quick here, so it was good to find that out early on. The team qualified first and third which was a really strong result. Our side, we could have been a bit better, we didn’t quite maximise it. I definitely could have done better. We were in a strong position for the race start and Lewis had a good stint, he was on the pace and came in, and I was ready to go. I was pumped up to get going and make up a few positions, but unfortunately our car caught on fire. It’s a real shame, but we’ll go away and come back stronger.”

Lewis Proctor #5 – “Jordan and I felt that quali was slightly disappointing for our car, but we still sat well on the grid. Had a really good start but I got squeezed on the exit of turn one, so dropped a position to fourth. But I then held that for the full hour and was happy with my pace. I came into the pits and unfortunately there was a fire, which ended our race prematurely. I felt worse for Jordan as he hadn’t even started his stint. We’ve regrouped, I was happy with the way I was driving and we’ll be back our again at Brands.”

Joe Osborne #56 – “Hard weekend. Again. Fastest in FP2 showed where we could have been. David having his off in quali wasn’t quite in the plan. I was just so relieved to see him was out the medical centre A-OK. Then for the team to pull a miracle out of nowhere and have the car ready for Sunday was insane. Something I’ll always be indebted to them for, and in warm up it felt brand new! David made good progress in the race and was up to third in Pro-Am. And the way the safety cars worked we could have been in the battle for the overall lead. But alas it wasn’t meant to be.”

David Pattison #56 – “Spa is my favourite circuit in the world but if you make a mistake it can bite you really hard. This weekend it bit me as hard as it could. Tolman are a proper team and the team work shown in putting our car back together was amazing. They also took good care of me. I am forever thankful to each and every one of them, and McLaren for making a really tough car.”