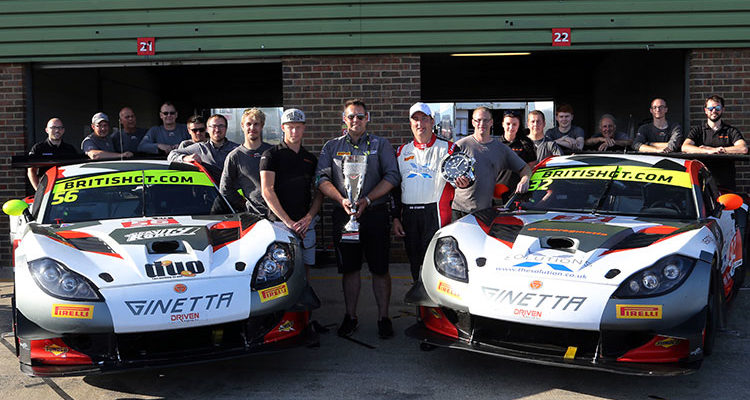 Tolman Motorsport recorded its best British GT result of the year at Snetterton last weekend, while the hard work of both its drivers and crew members was also recognised with two special awards.

Mike Simpson overcame illness to bring the #32 Ginetta G55 GT3 he shares with Ian Stinton home sixth and eighth in Sunday’s two one-hour races, while the team’s #56 entry – driven by David Pattison and Luke Davenport – also looked like a top-six contender before being sidelined in race two.

The Warwickshire-based squad’s two cars encountered contrasting fortunes during Saturday’s practice sessions after Davenport’s early accident caused significant front and rear damage to his Ginetta. While some team members returned to base for additional spares, the rest of the #56 crew’s mechanics set about repairing and re-welding the G55.

Things were a little easier on the other side of the garage where Stinton and Simpson built on their recent test mileage at Snetterton to lap sixth fastest in first practice.

The pair continued in the same vein during that afternoon’s qualifying session by placing seventh and eighth, Simpson looking particularly impressive with a time less than a second shy of pole. But it was the efforts of Tolman’s #56 pit crew that stole the show when the car emerged completely rebuilt in time for both 10-minute qualifying sessions. Their work didn’t go unnoticed by British GT officials who subsequently recognised Tolman’s efforts with the PMW Expo Team of the Weekend prize, awarded to the outfit that has shown ‘sporting attitude, dedication and spirit’ at each event.

The first of Sunday’s two one-hour races also offered the team a chance to demonstrate gains it had made on track since the start of the year, and Simpson and Stinton didn’t disappoint. The latter’s composed opening stint helped the Ginetta climb two places from where it started before Simpson took over for the final 30 minutes. Such was the car’s pace that a subsequent drive-through penalty for being marginally under the minimum pit-stop time and third pit visit to replace a punctured tyre came at the cost of just two positions.

However, there would be no such issues during the afternoon’s second race when the #32 Ginetta finished one place ahead of where it started, giving Stinton, Simpson and Tolman Motorsport their best result of the season.

Stinton’s role in the team’s results also didn’t go unnoticed, with British GT organisers making him their Blancpain Gentleman Driver of the Weekend.

Meanwhile, Pattison and Davenport’s Sunday was less productive after a paddle-shift gear issue stymied their progress in both races. Nevertheless, after business commitments forced Pattison to skip the Spa-Francorchamps weekend and Saturday’s practice accident restricted any further running, the crew’s Am driver can be pleased with his progress in race one when the Ginetta initially climbed three places from where it started.

The same can also be said of Davenport, who lined up 11th but was running eighth in the second when the same paddle-shift issue struck, sidelining the car.

“The testing we conducted here two weeks ago has really paid off this weekend,” said team principal Chris Tolman. “It’s been a tough season jumping up from a single entry in GT4 to a two-car GT3 team, but we’re starting to understand the G55 better. This was certainly our best weekend in terms of outright performance.

“I’m absolutely delighted for Mike and Ian who drove brilliantly this weekend. To miss out on a second top-six is frustrating but at least we know the pace is there to challenge. Luke and David also did well considering they hadn’t driven the car since Silverstone, and it’s moved on quite a bit in terms of set-up since then. There was a big practice programme scheduled for that car which obviously we didn’t get through, so David’s first laps of the weekend came in qualifying!

Tolman also paid tribute to his mechanics whose hard work was recognised with the Team of the Weekend Award.

“I’m blown away and feel quite emotional, actually, because it really does reward the guys for their incredible effort,” he added. “Normally in that instance you’d pack up and go home, but because Luke swiped the barrier it just tore all the bodywork off without touching the suspension. Even so, the guys had to weld a lot of the front end back together in a very short space of time. They did a great job and just got on with it.”

The final round of this season’s British GT Championship takes place at Donington Park on September 10/11.