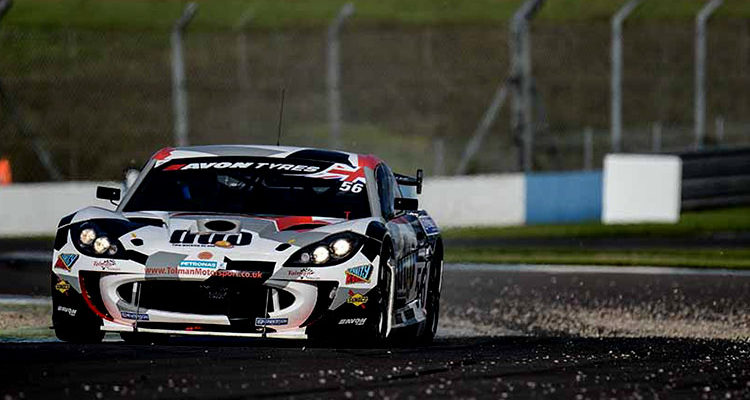 The season finale of British GT at Donington Park went according to the script! Unfortunately The Tolman Motorsport pairing of David Pattison and Luke Davenport did not round the season off with yet another podium, but once again showed how competitive the team have been.

Carrying a 10 second success penalty from the last round at Snetterton ensured that podium places were always going to be a huge ask. The field for this event was extremely strong with more Pro drivers and invitations from Europe bulking up the grid, making Donington the strongest GT4 entry all year! Red flag incidents during the Am Qualifying session ensured Pattison had a challenging 2 laps only for a chance at a good grid position. The Pro session saw Davenport P4 with just half a second separating the first 7 cars with Luke being just 3 tenths from Pole!

Three teams were up for title of British GT champions in the GT3 class which created an eventful race early on. David had a great opening stint putting in some fantastic laps times, The safety car was then deployed which allowed the pack to close up once more. The Tolman team performed their last pit stop of the season with the addition of their agonising 10 second success penalty making Luke’s task even harder. Davenport performed his usual magic but the deficit in this race was just too big, he battled hard with Fox Motorsports, AMD and Optimums cars but the Aston Martins were the class of the field when the flag dropped. A 7th place finish was scant reward for such heroic driving.

Far more of a reward was the final placings of the season, 4th overall in GT4 and 3rd in Pro/Am. Beyond their wildest dreams in the first year!

Team Manager Chris Tolman commented, “I will not deny we wanted to finish the season on the podium again, as we have tasted success and its quite a drug, but it was just too big an ask for this weekend. Like I have said all year, this has been a learning year for everyone involved, to have achieved what we have is beyond my wildest dreams! We have learned fast and got stronger every time the car is out. We have had no mechanical issues all year, No DNF’s and no penalty’s. We have had one of the fastest pit stops and we have outscored all the other cars in the second half of the season! I am so proud of everyone involved and cannot wait for next year!”

“It has been an absolutely fantastic season at Tolman Motorsport.”, said Luke Davenport. “Chris and the team have been exemplary, the car has been the most competitive I have ever driven and David has developed masses as a driver and is now a British GT race winner in his own right. To finish 3rd in the Pro/Am championship is the icing on the cake. The race itself was very physical. The car was strong but the racing was fraught. I incurred a lot of contact but we made our way through the pack as normal to consolidate our championship position. I would like to thank Duo Plc and Henderson Insurance Brokers for their continued support throughout 2015. We have created a great partnership over the past few years and long may it continue!.”

David Pattison added, “A really good finish to a brilliant season. We were carrying a penalty after success at Snetterton and that cost us a couple of places. I had a ‘challenging’ qualifying and didn’t help Luke much, but improved a lot in the race and really enjoyed my stint. Luke, as ever, was quick and aggressive and got us through a very talented pro driver field that was probably the most competitive of the season. Fourth overall and third in Pro Am is a great seasons work, well above our expectations. I am delighted and want to thank Luke and the team for making it a very special year.”

A huge thank you goes out to all our sponsors and partners. We look forward to racing with them again next year with the aim of bringing home even more silverware.