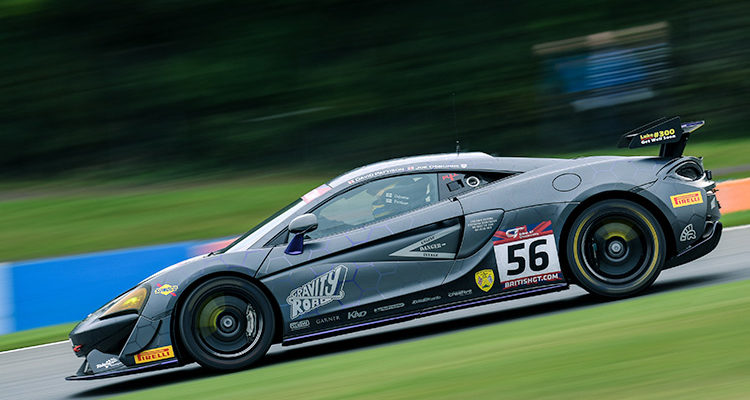 Despite not taking the chequered flag at the final race of the season last weekend at Donington Park, due to a brake issue, the Tolman Motorsport crew and drivers David Pattison and Joe Osborne are celebrating an extremely successful debut year with their McLaren 570S GT4.

Usual protocol kicked off the weekend where both free practice sessions were utilised to ensure the car set up was spot on for both drivers. “David did a new tyre run in FP2” said Osborne, “but he wasn’t quite up to his 2017 level so we had work to do, which was good because he knew about it!”

The Tolman Am certainly switched it on for qualifying, however, David encountered some misfortune with waved yellows on his first flying lap and a red flag halfway through. Although Pattison wasn’t able to get the best out of the new tyres, he posted a time strong enough to sit fourth in class. Osborne continued his regular qualifying performance with a phenomenal run, placing the #56 on overall pole by 0.3s. “Joe was obviously fantastic” exclaimed Pattison, “we started sixth overall and second in Pro/Am which is probably about where we wanted to be. We had the people behind us who we wanted behind us, including several Silver pairings.”

David had the honours of taking the start of the two-hour ‘Donington Decider’ and managed to surprise himself, by not only holding off the Silver drivers behind him, but also by keeping up with the 17-year-old, overall Championship leader, William Tregurtha! “We had a bit of a game plan” said Osborne, “to not be too aggressive with the Silvers, but it actually transpired that David’s pace was so good, we didn’t need to worry about them!”

Even with a handful of Pro drivers breathing down his neck, Pattison held station in sixth until Adam Balon in the #72 Track-Club McLaren slipped past towards the end of his stint. “I think David maybe pushed the tyres a little bit at the end” commented Joe, “so he came in third in class, but that’s still his best stint by some distance! It was pretty flawless, even with the rather aggressive GT3 cars in traffic, he did really well.”

The Tolman crew carried out their usual slick pit stop at the 60-minute mark, Joe took the wheel and the 570S served it’s 15 second success penalty, from finishing second overall at Brands Hatch. Pro Joe, then headed back out to battle up the ranks and hunt down Mike Robinson in the #501 Optimum Motorsport McLaren. It didn’t take long for Osborne to make light work of the #100 Garage 59 570S, and he then lined up the #55 HHC Motorsport Ginetta and #72 McLaren. “I caught up with Middleton and Mackay but they were a little harder to pass, I lost three laps there” admitted Joe, “I think that was really the championship hunt done then, I lost too much time getting past them.”

Disaster then struck when Joe started noticing an issue with the McLaren’s braking with 15 minutes to go. The team always knew they would be marginal on brakes at Donington, due to the hard braking nature of the GP configuration. Osborne radioed the team to report the pedal going long, so he started to nurse the car and be as smooth as possible, but as he hit the brakes for McLeans the rears locked, the fronts didn’t do anything, and the #56 pirouetted around and came to rest in the gravel trap. “I don’t think we would have been catching Robinson at the end, but it might have made the last 15 minutes a bit more interesting.” Osborne said, “We finished second in the Pro/Am Championship and in truth, that was probably where we were going to finish anyway even if we did get to the end of the race. So nothing lost there, just a shame to rack up a DNF through a technical issue.”

David Pattison took the result positively, “Overall its been a great season. I did the best stint I could and it was the success penalty which made the difference in the end. But then we had a great weekend at Brands Hatch so, what do you do?! And actually the success penalty, all the way through the season, has made the championship really interesting, so it works. I’m not upset or disappointed!”

Team Manager Chris Tolman commented on the brake issue, “We ran out of brakes because we’re faster than every other car out there. At some points throughout the race, Joe was 1.5 seconds a lap quicker than the rest of the field and you can’t be that much faster without something giving.”

Tolman stated that had the Pro backed off, the pads may well have lasted, but the team had a championship to fight for. “Hats off to Mike, Graham and Optimum because they had a sterling drive. But the reason they didn’t have the problems is because they were out in front the entire time, so they had no issues with brake cooling. Whereas because Joe was fighting for most of his stint, we didn’t have that luxury. Something has to give and I don’t think anyone is disappointed.”

The team now look ahead to what 2018 has in store and a championship win will almost certainly be something they will aim for!