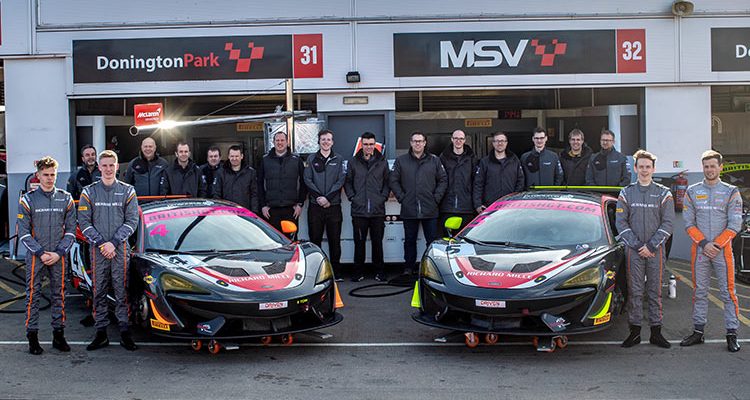 The Warkwickshire-based outfit announced that it will advance McLaren’s Driver Development Programme with a pair of 570S GT4s for James Dorlin, Josh Smith, Jordan Collard and Lewis Proctor on Thursday (28 February), but today broke cover in the Donington Park pit lane.

The McLaren Customer Racing Team utilised the day’s three British GT test sessions to shake down its McLarens and complete a full programme of system checks while its refreshed quartet of drivers bedded in to their new surroundings.

For Dorlin, Smith and Collard, Media Day was their first opportunity to sample the Tolman Motorsport-prepared McLarens, although Proctor simply had to dust off his shoulders after a long off-season.

All four benefited from coaching and data analysis from McLaren factory drivers in preparation for a series of test days, to be held in the weeks leading up to the 2019 British GT curtain-raiser at Oulton Park in Cheshire (20-22 April).

“I really got my head around the car, putting everything I’ve learnt through the McLaren Driver Development Programme into practice,” said Smith. “It feels like I’ve taken a massive step forward in today’s test, especially when you factor in all the work we’ve done with the data and on-board videos. I’m driving the car in the right way, rather than like a single-seater, and I’m on my way to getting the best from it. With more testing to come, we will be ready at Oulton Park next month.”

Dorlin said: “I end the day feeling very happy with how much progress I’ve made. With it being Media Day, it’s difficult to get a handle on how you compare to everybody else, but I became more and more confident every time I hit the track and showed good pace, even though it was only my first time in the car. I’m so much further on from where I started the day and we will be in a position to play around with setups in the tests leading up to the opening round of the season at Oulton Park.”

Collard added: “It has been a really positive and useful day when it comes to learning how to drive the McLaren 570S GT4 and the way we’ve prepared in the Driver Development Programme definitely put us in good shape. Our pace was good, but we weren’t pushing hard and it was primarily about getting to grips with the car. We have more testing to come and I think we will be strong come the first round of the season at Oulton Park.”

Proctor said: “Today was positive because I was really relaxed and happy to be back in the car. Red flags and traffic interrupted the first half of the day, but it wasn’t about ultimate lap time and things improved so we completed a few clean runs towards the end of the day. I feel very comfortable with the McLaren 570S GT4, but I’m looking forward to the next test when updates will be installed. It will be fascinating to see how much performance we gain and I will be approaching the tests with a relaxed head and a focus on being consistent and sensitive to setup changes.”

Tolman Motorsport Team Principal, Christopher Tolman, said: “It has been a very good day. We shook both cars down, each driver got a lot of meaningful running, therefore it was a hugely successful first day for the team. We weren’t chasing lap time today, it was just about assessing the cars and bedding in the drivers, who all drove flawlessly and stayed out of trouble. We have three more test days, including one at Oulton Park, so we should be well dialled-in once the season starts in earnest.”