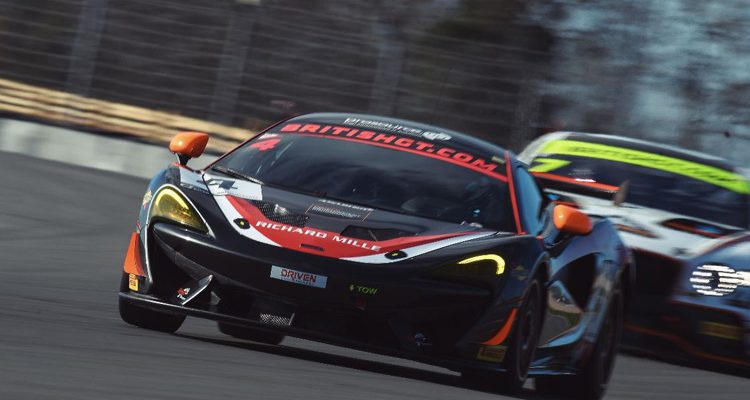 Tolman Motorsport is primed and ready for the opening round of the 2019 British GT Championship at Oulton Park (20-22 April), having successfully worked through its pre-season preparations.

From there, it embarked on an intensive pre-season test schedule with drivers James Dorlin, Josh Smith, Lewis Proctor and Jordan Collard, who have also been engaged in thorough simulator, exercise and nutritional training since being selected to join McLaren’s ranks.

All four have acquitted themselves well, bedding-in to their new surroundings and adapting their individual driving styles to suit the GT4-spec McLaren with guidance and insight from professional driver coaches, finding pace and confidence ahead of the new season.

As a result, Tolman Motorsport is primed and ready for the opening instalment of the 2019 British GT Championship at Cheshire’s picturesque and undulating Oulton Park circuit, where it achieved a class podium finish 12 months ago.

The Oulton Park curtain-raiser will be Tolman Motorsport’s first opportunity to gauge its relative performance against a 35-strong field comprising no fewer than 21 GT4 entries, and the McLaren Customer Racing Team has ensured it is in the best possible shape.

“Now we’ve done a bit of testing, my teammates and I are far more comfortable in the McLaren 570S GT4,” said Dorlin. “Coming into the first round at Oulton Park, we’ve done all the preparation, including race and qualifying simulations, and I feel fully at home. We’ve all been able to develop more of a relationship with Tolman Motorsport and understand how the team works.

“It has been impossible to gauge our performance against the competition, especially as we haven’t tested since the Balance of Performance was published, but the McLaren was competitive last year, and I expect that to carry on in 2019. Of course, there are new cars and drivers so we will know more after qualifying, but I’m here to do a job for McLaren and that is to simply drive the car as fast as it can go.”

Proctor added: “Pre-season testing has gone really positively, and we’ve had experience in both wet and dry conditions. The McLaren 570S GT4 really excels in all weathers and we’re prepared for anything the Easter Bank Holiday weekend throws at us. I’m excited to get out and among the whole GT4 field, as it has been hard to tell who’s on and off the pace and what the relative speed of the other cars is. However, I couldn’t be happier with the McLaren and Tolman Motorsport’s performance thus far – I’m thrilled to be in this position with McLaren and Tolman, who have put so much work into the 2019 season.”

Tolman Motorsport Team Principal, Christopher Tolman, said: “Testing has gone to plan and it has been useful for James (Dorlin), Josh (Smith), Lewis (Proctor) and Jordan (Collard) to get experience of the McLaren 570S GT4 in both wet and dry conditions. Each driver has progressed well, showing a willingness to learn and an ability to adapt. Of course, it’s impossible to predict how we will stack up against the opposition at this stage, especially with so many new cars and driver combinations. All I know is, Tolman Motorsport is as prepared as it possibly can be for the opening round of the 2019 season at Oulton Park and we will be pushing hard for big results.”