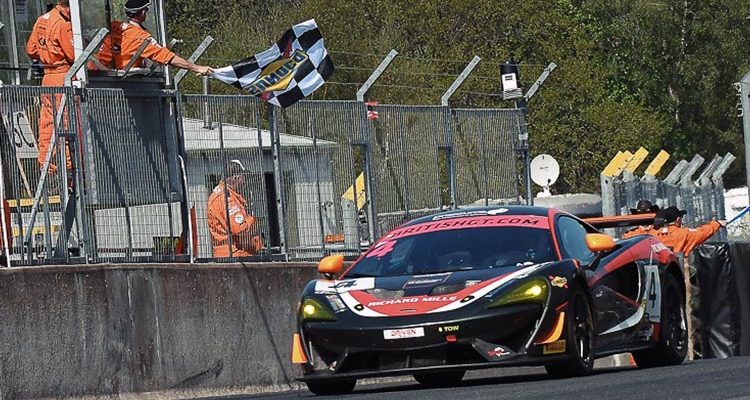 Tolman Motorsport raced to the podium in the opening round of the 2019 British GT Championship at Oulton Park (20-22 April).

The McLaren Customer Racing Team finished second in the outright GT4 classification with James Dorlin and Josh Smith during Round 1 at the Cheshire racetrack, before Jordan Collard and Lewis Proctor followed that with a P2 result in the GT4 Silver order during Round 2 on Easter Monday.

System checks and driver-change practice kept Tolman Motorsport occupied during Friday’s tests and the Warwickshire-based squad ended the day in sixth and tenth, aware that both cars had more to give with optimised setups.

Further progress was made in Saturday’s free practice sessions; pace was twinned with consistency and, while Dorlin and Collard benefited from fresh rubber, their teammates were also able to push for comparable times in the 1m44-45s bracket on tyres that had completed in excess of 20 laps.

The first four-part British GT qualifying session of 2019 was held as ambient and track temperatures peaked on Saturday afternoon.

In the GT4-Am segment, which set the grid for Round 1, Hampshire’s Collard had three stabs at pole position but ultimately secured fifth on his final flying lap, as Dorlin in the sister #4 car locked down ninth.

However, Dorlin was one of the biggest movers at the start of the first race on Easter Monday; the Barnsley racer rose from ninth to seventh on lap one and temporarily took over as the lead Tolman Motorsport contender while the GT4 pack navigated a series of obstacles in the form of stricken GT3 cars.

The class frontrunner was well within sight and Collard quickly cleared an Aston Martin and Ford Mustang to break into the podium positions, before reeling in the fight for P1 prior to the mandatory driver-changes.

Dorlin, meanwhile, slid back to seventh after being pushed wide, but pulled off a stunning resurgence that ensured teammate Smith was side-by-side with the class-leading HHC Motorsport McLaren of Callum Pointon as he exited the pits at the start of his stint.

Smith slotted in to second to head the #5 Tolman McLaren, now in Proctor’s hands; other cars joined the fight for victory and Proctor was a late casualty after avoidable rear-end contact resulted in a damaged exhaust system and bodywork, which led to a fire.

However, Smith resisted the mounting pressure and received the chequered flag in second position to secure a podium on his and teammate Dorlin’s British GT debut.

“It was an intense way to win a race, because I was alongside the GT4 leader as soon as I exited the pit lane and the battle never stopped,” said Smith. “Given that we started ninth, a podium result makes this a great start to the 2019 season. The McLaren 570S GT4 felt incredible throughout both races and, with more time in the car, things can only get better.”

Dorlin added: “It was non-stop from the moment the lights went out. I made up a few places at the start and pushed to the first Safety Car, which bunched everybody up again. The overcut strategy we opted for proved effective, as we got Josh (Smith) out with the GT4 leader. Ultimately, this result is down to several factors coming together and I’m delighted that we have started the 2019 season – mine and Josh’s first in the British GT Championship – so strongly.”

The grid for Round 2 was settled during GT4-Pro qualifying on Saturday, and it was Proctor who headed the Tolman charge, breaking into the 1m43s to go eighth fastest with the slenderest of margins over Smith in tenth.

A storming start enabled Smith to leapfrog three drivers, including Proctor, for seventh, although an incident promoted them to fifth and sixth respectively before a Safety Car neutralised a burgeoning five-way fight for fourth in GT4.

Soon after the restart, Smith despatched the fourth-placed Aston Martin and set about consolidating his position prior to the pit stops, as Proctor searched for a route through an intensifying battle for P4.

However, Tolman Motorsport fell out of podium contention during an ill-timed Safety Car that coincided with the team’s pit stops.

Collard held station saw out the hour-long contest in sixth in GT4 and second in the Silver classification, while a stop/go penalty for a pit lane speed infringement resigned a frustrated Dorlin to 14th.

Tolman Motorsport Team Principal, Christopher Tolman, said: “The podium we achieved with James (Dorlin) and Josh (Smith) was magnificent and I’m so pleased that they did it on their British GT debut. However, I’m gutted for Jordan (Collard) and Lewis (Proctor) in car #5, because they were also on for a podium before unnecessary contact took them out. The pace is obviously there and the boys are learning an awful lot every time they get in the cars. Race two didn’t go to plan at all, but that’s motorsport. On the whole, we started with a good finish, fought for more big results, possessed winning pace and the team gelled incredibly well.”