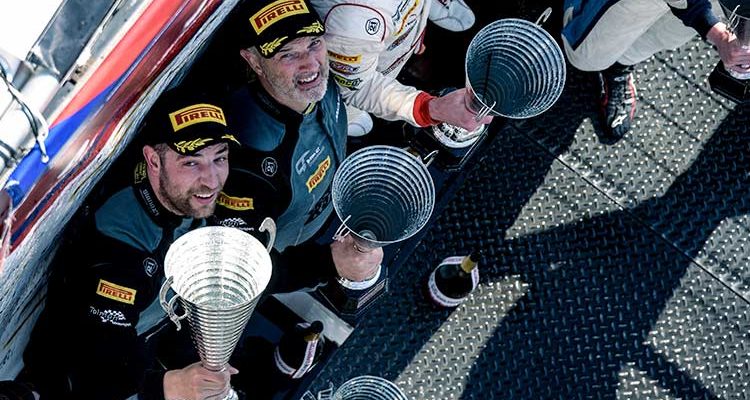 Following the mixed fortunes of the previous round at Spa last month, the Tolman Motorsport crew put themselves under pressure to ensure their set up would be perfect, for the penultimate round of the domestic GT series. This was even more paramount due to the 10-second success penalty, from the podium finish in Belgium, that the car would have to serve during Sunday’s race pit stop.

This was the second visit to the Kent circuit for the team this year, as they had competed in the European GT4 Series round back in May and managed to come away with a podium finish. The guest race was treated as a test, albeit a rather extravagant one, but the Tolman Am was sure that it had been key to their BGT race weekend prep. “I think competing in the Euro GT4 round was a massive positive” commented Pattison, “it meant that we came into the British GT weekend understanding the circuit, and that helped me immensely.”

Both practice sessions on Saturday were marred by multiple safety car periods. Nevertheless, the crew managed to utilise the time they had, by simulating some qualifying runs for Pattison. Osborne commented, “David did a mega job in FP2. Despite the rain tainting his quali sim, we knew that his dry pace was good.” The #56 570S finished the second practice run as the fastest McLaren, and also topped the Pro/Am timesheets.

Dynamic weather during the qualifying sessions meant that the team had some important calls to make in terms of set up. Considering David had not completed a wet lap around Brands GP before, he did a fantastic job to place 5th in Pro/Am, in very tricky conditions and was a mere two-hundredths of a second away from the 4th position #111 Ginetta of Anna Walewska.

Joe continued his incredible qualifying performance in the Pro session, placing pole position by a second. Osborne initially set out on wets tyres, however he made a great call at the perfect time to swap to slicks, just as the track was beginning to dry. That, combined with a mega pit stop by the Tolman crew, saw the #56 head out again with enough time for two more flying laps. Only one was needed for Joe to prove his pace and set the timing screens alight with purple sectors. “Joe was amazing in qualifying!” said a thrilled Pattison, “not only did he set the fastest lap in the wet, on wet tyres, he set the fastest lap in the dry, on slicks!”

The aggregate time meant that the #56 McLaren placed P1 in Pro/Am and sixth overall on the GT4 grid for Sunday’s two-hour battle, which was the best qualifying result the team had achieved all year.

Tolman set about creating a game plan for the penultimate race of the 2017 season, as they knew David would be surrounded on the grid by some very quick silver graded drivers. “We told David not to fight them” commented Osborne, “and that worked out perfectly for us as we didn’t lose much time.” Pattison managed to lead the Pro/Am class for a fair few laps before Adam Balon got by, but even then, David didn’t let the Track-Club Am pull away.

With 30 minutes of racing complete, a safety car was called in order to retrieve the stranded Academy Motorsport Aston Martin, which gave David the chance to close the gap between himself and the silver drivers ahead. Osborne praised the Gent driver on his performance, “I’d probably say that David drove better in the second half of the race, after the safety car. He managed to keep his pace up, whereas the other driver’s times seemed to have dropped off.”

The Tolman crew performed a slick pit stop at the half way mark and sent the #56 machine on its way, after serving the extra 10-second success penalty. Joe wasted no time in charging up the order and it wasn’t long until he was running as the fastest GT4 on circuit. However, the Pro criticised himself for pushing too hard, too soon, “I genuinely forget how heavy we are, as it doesn’t feel like it!” Joe said. “We lost performance in the mid part due to this, so I had to do a couple of slower laps to bring the tyres back into a nicer window.”

Osborne soon picked off HHC’s Tregurtha and Track-Club’s Mackay to sit P4 overall. Whilst the MacMillan Aston and the Garage 59 McLaren battled up front, the #43 Century Ginetta had to serve a stop-go penalty, meaning Joe could rapidly reduce the gap ahead. With just over 10 minutes to go, Joe caught up to the leading pair and pulled a fantastic move on Haggerty in the #100 McLaren at Druids.

Now running first in class and P2 overall, Joe set his sights on the overall victory, but after reporting a small brake issue, the team decided to take no risks. Joe was asked to manage the problem and brought the 570S over the line to claim the third class victory and third overall podium of the year.

The Pro commented on what could have been, “we always want to win and we won our class which is brilliant, but P2 is that frustrating number. I’m 99.9% happy!”

Pattison praised the Tolman crew on their fantastic efforts which lead to an almost flawless weekend, “the car just felt amazing and did exactly that I wanted it to do!” the Am stated. “I had a couple of bashes, but I kept up with people who would normally be two or three seconds a lap quicker than me!”

David continued to applaud Osborne on his contribution as a Pro, “if you hand the car over to Joe in a position where he can make something happen, he always delivers. I think it’s true to say that this time, I really contributed to the result and that is such a good feeling!”

Team owner Chris Tolman reflected on the team’s professionalism, “it was fundamental to our position in the championship standings to have a good result at Brands Hatch. To try and cure the issues we had at Spa and Silverstone in such a small window has resulted in a lot of ‘behind the scenes’ work, and we’ve got there. David drove out of his skin and Joe continues to do an exemplary job.”

The team now lead the GT4 Pro/Am Championship by 8.5 points over Optimum Motorsport’s Graham Johnson and Mike Robinson. The Donington decider, championship finale takes place on the 23rd/24th September, and the Tolman team are ready to do all it takes to hold onto that top spot!