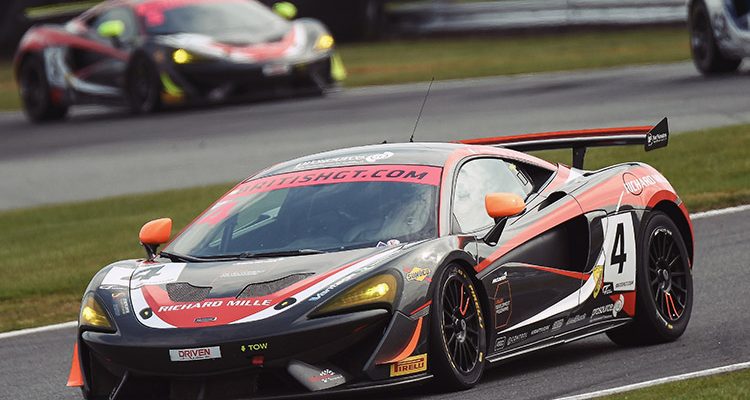 Tolman Motorsport is seeking redress for the podium results it was denied in the Oulton Park curtain-raiser when the British GT Championship moves on to Snetterton for Rounds 3 and 4 of the 2019 season (18-19 May).

The McLaren Customer Racing Team fought to a second-place result with James Dorlin and Josh Smith in Round 1 at Oulton Park.

It was unfortunate to fall out of podium contention in Round 2, although Lewis Proctor and Jordan Collard still finished sixth in the overall GT4 classification and runner-up in GT4 Silver.

Nevertheless, Tolman Motorsport showed it has the potential to run at the sharp end of the super-competitive GT4 pack in race-trim, and its drivers feel their performances in a recent test on the Snetterton ‘300’ circuit bode well for the forthcoming race weekend.

“James (Dorlin) and I are really hankering after a win or two podium finishes at the very least,” said a bullish Smith. “It was more than possible at Oulton Park and we would have definitely followed-up our race one podium with another in race two if we hadn’t been so unlucky with the timing of the Safety Car.

“We recently had a good test at Snetterton, but I didn’t get to extract the most from the car in the dry because rain fell just as I was about to show my potential on my new-tyre run. It’s always nice to see quick times on the dash, but I’m quietly confident I can stitch it all together when it matters because James did prove the pace is in the car. Having said that, there were really positive signs in the wet and I will have a massive smile on my face if we see a few raindrops on Sunday.”

Collard added: “I feel the McLaren 570S GT4 is going to be a good package at Snetterton. The test was very positive, as Lewis (Proctor) and I were very quick, and we learnt a lot. It’s always good to get a test in just before a race weekend and, now the Balance of Performance has been released, I think we may be one of the quickest in race-trim, whether it’s wet or dry. You don’t know for sure what to expect, but I think we will be disappointed if we don’t come away from the weekend with a couple of podiums, given that we came so close at Oulton Park.”

Tolman Motorsport Team Principal, Christopher Tolman, said: “There’s a lot to be optimistic about as we head to Snetterton for the next instalment of the 2019 British GT Championship. It was brilliant to start the season with a podium at Oulton Park, although we deserved more. James (Dorlin), Josh (Smith, Jordan (Collard) and Lewis (Proctor) have continued to make progress, finding more speed and confidence in testing. I think we have the pace to achieve some solid results with two clean races at Snetterton, where we have previous form, having taken a win, triple podium and the championship lead in 2018.”