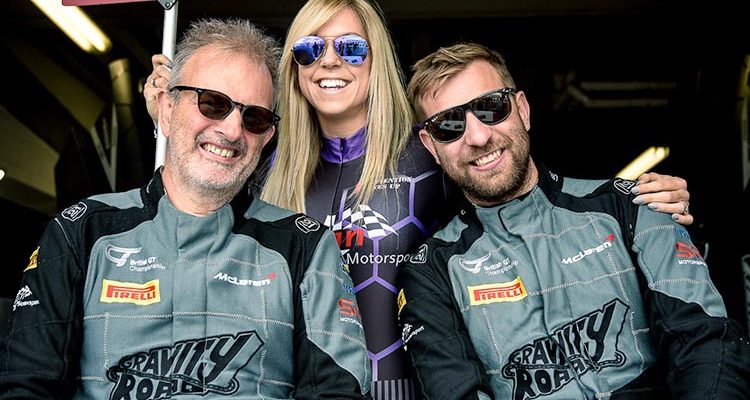 Tolman Motorsport left Silverstone with the fastest GT4 lap of the race, which set a new British GT Championship GT4 benchmark, but little else despite the strong showing by the Pro/Am pairing of Joe Osborne and David Pattison. The Sunoco Fastest Lap of the Race was a welcomed reward, after a string of rotten luck resulted in the #56 McLaren 570S GT4 taking multiple unplanned pit stops, and this saw it pass the chequered flag 8th in class.

Following their success at Snetterton in May, the Tolman crew headed to the home of British motorsport, to compete in the British GT Championship’s blue-riband event, the Silverstone 500. The three-hour battle saw Gent driver David undertake his longest ‘minimum stint time’ of the year, which was spread across two separate runs.

Free practice one was the first port of call on the Saturday morning and the team used this session to trial various set up changes. This was continued into FP2, where #56 crossed the line third in class.

Despite getting caught up in traffic during his qualifying run, Am Pattison managed to piece together an impressive lap time to place him fourth in class. “I’m really pleased with qualifying” commented David, “I don’t quite know where my lap came from. It seems to be a consistent feature this year, and it’s important that there was even more time to be found, as I didn’t manage my traffic very well.”

Osborne qualified third in class and third overall, of the regular GT4 runners, which continued his routine showing of being the fastest McLaren on track. “The car was really good, the best it had been all weekend” Joe said, “I’m relatively happy with P3, considering our extra 20kg and an extra 5mm ride height change, a balance of performance adjustment we were given post-Snetterton. My aim is to always be the fastest McLaren.” The aggregated qualifying time placed the #56 570S, P3 in class and seventh in the BGT GT4 regulars.

David took the start of the three-hour dash and impressed the team with his consistent lap times and his confident handling of the GT3 traffic. “I could have been a bit faster, but we’ll put that down to experience!” Pattison exclaimed. After almost an hour of running, David handed the Tolman McLaren over to Joe and it didn’t take long before the Pro was the fastest man on circuit. This was a regular occurrence throughout the full three hours, which resulted in Osborne achieving the fastest lap of the race and at times, Joe was closing in on his competitors at up to a phenomenal, four seconds a lap.

It was from then that disaster struck, a puncture to the front left tyre saw Osborne pitting before the scheduled time. This was the first of a handful of luckless events which marred the remainder of the Tolman crew’s race. Joe brought the #56 McLaren over the line 8th in class. “Our race was called by unfortunate tyre issues” the Pro said, “so we will never know where would have finished. But our fastest lap gives us an indication of where we could have been.”

Team Manager Chris Tolman commented on the frustration of the result, “it’s a shame that everyone’s performance wasn’t rewarded. We had a very unlucky race.”

Tolman Motorsport are now looking ahead to the European round of the British GT Championship, at Spa Francorchamps in Belgium, next month (7th-8th July).