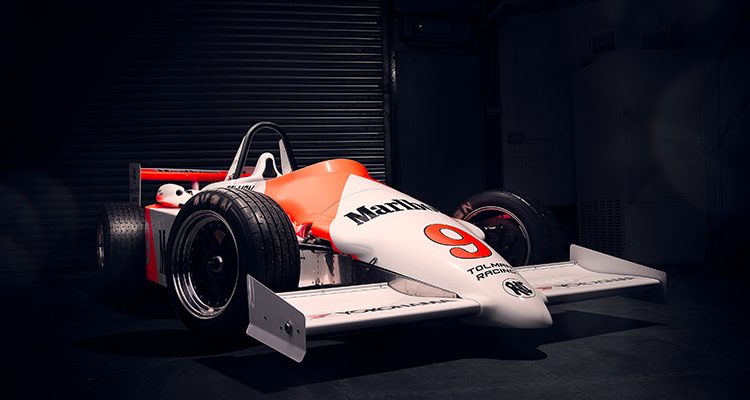 For Tolman Motorsport, the Ralt RT3 restoration was deeply challenging, although the team revelled in having a free-hand when it came to reviving this iconic single-seater race car for its competitive comeback in the new-for-2019 FIA Historic F3 Championship.

Chassis 3-445 was purchased by a passionate petrolhead and a long-standing Tolman Motorsport customer whose club racing activities in a Ginetta G20 spurred Christopher Tolman to set up his own organisation.

It arrived at Tolman HQ in Warwickshire as a pile of obscure chassis and suspension parts and was openly described by Tolman Motorsport engineers as “a jigsaw puzzle with missing pieces and no picture on the box”.

Intense research was required to determine where each component went and to source an authentic engine, gearbox and a wide array of parts in time for the RT3’s return to the racetrack.

Tolman Motorsport ultimately selected a Volkswagen powerplant; the original F3 engine was based on an 1800cc unit from the VW Golf, and readily available parts ultimately resulted in a more efficient rebuild than if the team had opted to locate and restore the much older Toyota or Alfa Romeo equivalent.

Countless man-hours were spent re-machining components, ensuring the engine and gearbox were built to the correct specifications and the tub, which had been badly cut up during the car’s stint on Hillclimbs, was fully restored.

However, the RT3 remained in its original form as a ground-effect car and to be eligible for the FIA-sanctioned Historic F3 Championship, the beautifully-crafted wide body would have to be re-worked to replicate the car’s flat-floored successor that made its competitive debut when ground-effect was banned for 1985.

In a non-descript white livery, Italian Claudio Langes raced the car to fourth overall in the 1984 European F3 Championship, only finishing behind Ivan Capelli, Johnny Dumfries and Gerhard Berger, but there was little deliberation before Tolman Motorsport chose to adorn the Ralt RT3 in the evocative white and orange Marlboro colours, as sported by Alfonso de Vinuesa at Jarama, Spain at the end of the ‘84 season.

“The Ralt RT3 was entrusted to Tolman Motorsport for a complete rebuild and it’s fair to say that it presented quite a few challenges,” said Tolman Motorsport Team Principal, Christopher Tolman. “It was a long-term project and the challenges only served to make this a more enjoyable and rewarding restoration for all involved. It was exciting to have a completely free hand when it came to restoring what was merely a pile of bits to the best possible race car for competition in the FIA Historic F3 Championship. In period, the car raced in a wide array of liveries, but the white and orange Marlboro colours Alfonso de Vinuesa ran in 1984 were the obvious choice. The car looks stunning and we couldn’t be happier with the finished article, which will be displayed front-and-centre at Race Retro.”