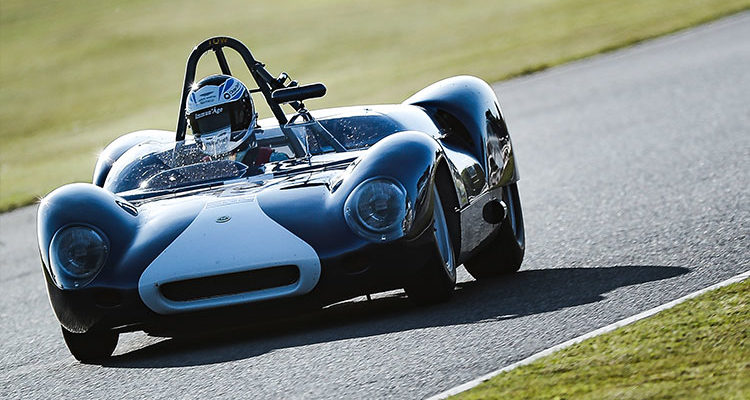 Tolman Motorsport once again showcased its full race, restoration and recreation capabilities by pushing to sixth place with a pristine Lotus 19 on its return to The Goodwood Revival (13-15 September).

The Warwickshire-based engineering company fielded a complete reproduction of the Mecom Racing Lotus 19 in the Whitsun Trophy for V8 sports-prototypes from the Sixties for Darren Turner.

The Aston Martin Racing works driver had his first experience of the V8-powered sportscar in Friday’s qualifying session.

Clear, traffic-free laps were at a premium and Turner was subsequently unable to settle-in to his new surroundings and record a representative lap time, therefore he was resigned to seventh on the Whitsun Trophy grid.

However, a strong start to Sunday’s race saw him surge up the leaderboard and threaten the podium places during the opening tour of the fast and flowing Goodwood Motor Racing Circuit.

Still adapting to the lightweight Lotus, which notably contested the 1964 Brands Hatch Guards Trophy, Turner slipped back to seventh and spent much of the race in the wheeltracks of an ailing Hamill-Chevrolet that was dropping oil on the racing line, significantly reducing grip.

A Safety Car intervention gave Turner some respite and provided an opportunity to notify Hamill driver, Jack Tetley, of the problem.

At the resumption of racing, Turner bolted away from the chasing pack and put in a concerted effort that saw him close a six-second deficit to Tony Sinclair’s Lola T70 Spyder to just 1.2s on the sprint to the chequered flag.

“Firstly, I’d like to thank Tolman Motorsport and Christopher Ross for allowing me to drive the Lotus 19 in the Goodwood Revival,” said Turner. “It’s always a fun weekend, but I had a lot to learn to understand how to get the potential out of the car, which has been on the podium before. The Can-Am cars are proper beasts that can reach 170mph on the back straight at Goodwood, so they’re not to be taken lightly. I struggled to find a clear lap in qualifying and it took me quite a while to get used to the car, but I ultimately made progress in the race, just missing out on a top five finish because of a Safety Car and lapped traffic. I definitely needed more time to adapt because I couldn’t really attack into the corners, but the balance stayed consistent throughout the race and the car was very reliable. All-in-all, an enjoyable experience.”

Tolman Motorsport Team Principal, Christopher Tolman, said: “The Goodwood Revival is not only an incredible event for competitors and spectators alike, but it serves up an opportunity to show Tolman Motorsport’s expertise in restoring, recreating and running historic road and race cars for customers. This year’s Goodwood Revival went well, as the Lotus 19 performed faultlessly, and we were pleased Darren (Turner) took the car to sixth overall in a super competitive field of extremely fast cars and drivers.”