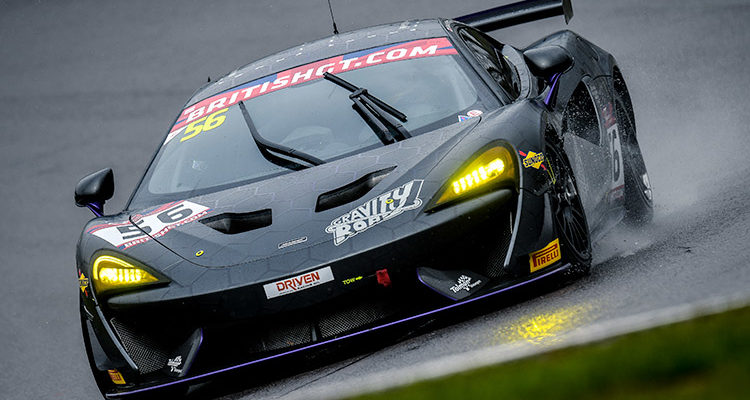 A bittersweet weekend for Tolman Motorsport, as David Pattison, Joe Osborne and the team leave Oulton Park with a third position in the GT4 Pro/Am category from race one, but a disheartening retirement in the second race of the day.

After a long, but positive winter period full of pre-season preparation and testing, the Tolman Motorsport crew headed North to Oulton, to make their debut in the McLaren 570S GT4 at the first round of the 2017 British GT Championship. The McLaren wasn’t the only new element to their BGT campaign. Joe Osborne is no stranger to the team, as he has coached David Pattison from day one of the Am driver’s racing career. Yet up until Monday, Osborne had never partnered Pattison in a competitive GT race. “Joe understands how I work”, commented David, “and that is fundamental to my development as a driver.”

Saturday morning saw the #56 machine consistently feature at the top of the GT4 time sheets during the pair of practice sessions. Pattison improved greatly with every lap of the Cheshire circuit in dynamic conditions, and Osborne continued to assist the team in developing the car’s set up to suit the undulating course.

Race positions for the majority of the British GT season are decided on the combined qualifying times from the driver pairing. However, for the ‘two x one’ hour races, Joe and David’s fastest individual lap times are used to decided their starting spot for each race. Pattison did a great job to qualify in his best ever position of 11th for the first race, and despite being held up in traffic and having to manage a slight technical issue, Osborne placed the 570S in sixth position for race two.

David’s last race in a GT4 around Oulton Park saw him and Luke Davenport take fourth place in 2015, so the London-based driver was looking forward to a similarly successful battle. Pattison took to the hot seat for the opening round and impressed the team with his stint in tough conditions. “It was a massive improvement on his wet testing” said Tolman engineer, Rob Courtneidge, “his pace was great compared to the other gents around him.”

The team ran the car perfectly, and lost no time during their mandatory pit stop. Osborne took over soon after the pit window opened and it wasn’t long before he made his way through the pack, picking off the Team Parker Racing Porsche and the Century Motorsport Ginetta of Mike Simpson. The Tolman Pro had a particularly strong run, being very specific with his passing points and was regularly the fastest GT4 on circuit. Osborne brought the stealth fighter inspired McLaren over the line third in Pro/Am, and seventh in the GT4 class. “I really enjoyed that race”, said Pattison, “it was the fastest I have ever driven in the wet. I held onto mid pack which gave Joe the chance to progress up the field and take third in Pro/Am.”

Attention then turned to race two, but it unfortunately ended as soon as it had begun. Joe had a fantastic start from P6, making two places by the first corner, “I only went forwards!” commented Osborne. Disaster struck when Joe was then left with nowhere to go, as two competitors ahead of him made contact and Osborne lightly touched the rear of a rival McLaren. This was enough to loosen the bonnet clips and following a phenomenal move around the outside of the #42 Macmillan AMR Aston two corners later, the bonnet flew up and smashed the windscreen.

“I couldn’t see anything” Osborne commented, “the team made the sensible, but heartbreaking decision to retire the car. Nevertheless, the car was good all weekend and we are still learning.” Pattison remained upbeat, despite not taking part in the second race. David stated, “Its just such a shame that we couldn’t showcase our dry weather race pace, because that is where we really shine. Onwards to Rockingham!”

Tolman Motorsport will head to Rockingham for the first two-hour race of the season on the 29th and 30th of April.