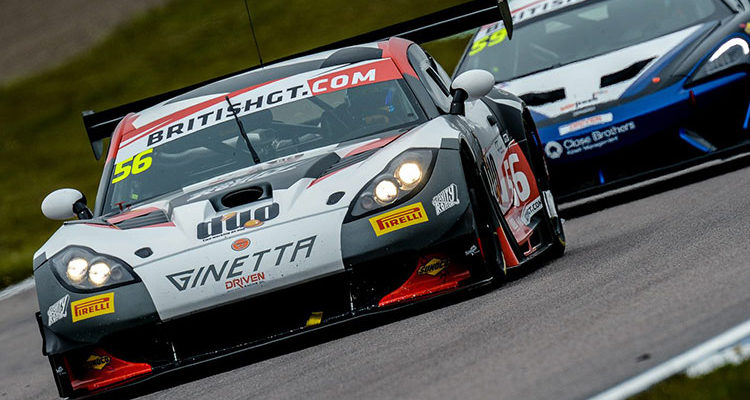 Tolman Motorsport emerged from a tough second round of the 2016 British GT Championship at Rockingham last weekend (April 30/May 1) battered but unbowed after demonstrating only a fraction of its true potential.

Neither of the Ginetta factory-supported outfit’s G55 GT3s, piloted by Ian Stinton and Mike Simpson (#32) and David Pattison and Luke Davenport (#56), scored points at the end of Sunday’s two-hour encounter after a combination of car-related dramas and over-zealous driving from class rivals prevented the Warwickshire-based outfit from capitalising on a particularly fraught race.

There were some positives to be taken from Saturday’s free practice sessions thanks to Simpson, who posted the seventh fastest time despite completing only a handful of competitive laps. And the same was true early that afternoon in FP2 when both cars circulated within half-a-second of the overall top-four.

Saturday’s qualifying session went much the same way with Simpson and Stinton’s combined efforts good enough for eighth on the grid, while the much more inexperienced pairing of Pattison and Davenport – both of whom are contesting their first season of British GT3 – set the 11th fastest aggregate time. Although still some way short of where the team had hoped to be, those grid slots did at least offer some chance of a double points finish on Sunday.

Alas, those hopes were dashed as early as lap one when Stinton’s Ginetta was rear-ended by Will Moore’s Audi R8 LMS GT3. The move earned the Optimum Motorsport driver a stop/go penalty, but that came as little consolation for the team that nevertheless worked tirelessly to replace the car’s left-rear upright and driveshaft. Such a lengthy job was never likely to result in points and, despite Simpson returning to the fray much later in the race, the #32 entry would end its day unclassified.

Meanwhile, the #56 G55 GT3 also endured a difficult opening stint thanks to a gradually delaminating tyre that finally let go on Pattison after 19 difficult laps just as the car had passed pit entry. The slow in-lap that followed all but ended the crew’s hopes of scoring points.

Davenport’s subsequent pace, which tallied with that of the GT3 midfield, at least offered one crumb of comfort before the 2015 Rookie of the Year’s eagerness to make up for lost time saw he and three other drivers excluded for passing other cars under yellow flags.

Team owner Chris Tolman was philosophical after another weekend of what-ifs for a squad still only two races in to its second season, and first competing in the senior GT3 ranks, of British GT.

“One of those weekends pretty much sums up our time at Rockingham where we seemed to take one step forwards and two steps backwards,” he said post-race. “Some of the things you can put down to inexperience and bad luck, but it’s incredibly frustrating when you see a chance to score good points go begging. The step from GT4 to GT3 is massive and we need to capitalise on unpredictable races like Rockingham’s if we’re to stand a chance of bagging a decent result.

“Ian’s incident was pure bad luck but caused a lot of damage to the rear of his car. There’s not much you can do when someone else rams you, but at least it demonstrated the team ethic we have at Tolman. The guys knew there was no chance to score points but still worked like mad to fix it. As a team we can be very proud of that.

“We can also take something from the pace we showed, admittedly in fits and starts, this weekend. There’s still clearly a disparity with the Balance of Performance; I think that’s a given. However, we made the best of what we had and showed a decent turn of speed in FP2. Luke’s race pace was also very consistent when he took over from David, which was one of his trademarks in GT4 last season. He also held his hand up and admitted the mistake of passing another car under yellow flags. I’m sure he’ll learn from that and come back stronger.”

Tolman Motorsport will be hoping that’s the case next time out when British GT visits Oulton Park in Cheshire for rounds three and four of its 2016 campaign on May 28/30.