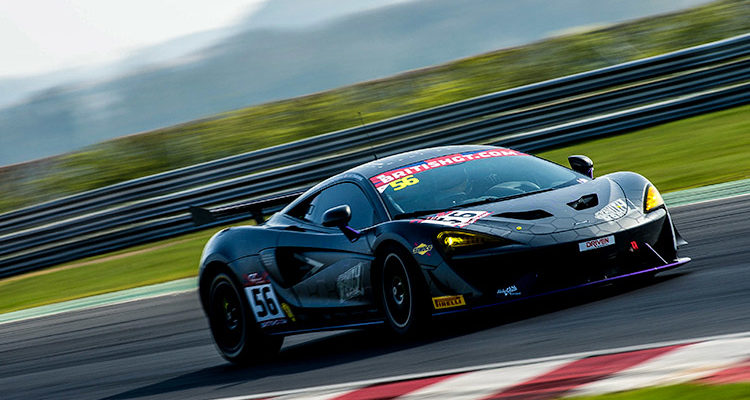 Tolman Motorsport returns to the ultra competitive British GT Championship for the third year running, where David Pattison and Joe Osborne will pilot the stealth fighter inspired McLaren 570S GT4 for the 2017 season. The team have their hearts set on winning, but are under no illusion that they are up against some solid competition.

The Warwickshire-based outfit switched back to the GT4 class, after their 2016 campaign, with their Ginetta G55 GT3s, was marred by rotten luck and misfortune. “The McLaren was the obvious choice” said Pattison, “they had some very strong results at the end of last year and that is ultimately what led us to head down this route.”

British GT regular Osborne, is no stranger to the class. With the 2009 GT4 European Cup title and multiple GT4 wins under his belt, Pattison trusts that the Pro has what it takes to get the job done. “Joe was right there when I first sat in a race car and he has been my coach ever since” Pattison stated. “He is a very strong driver, we understand each other and we know exactly what we are here for.”

Despite the challenges that have come with running a brand new car, Team Principal and Owner, Christopher Tolman, is pleased with how their pre season programme has developed. “Once we got our heads around the complexities of how the 570S works, we have made solid headway and completed plenty of quality mileage.” A major factor in selecting their new machinery, was based on how ‘gentleman driver friendly’ the GT4 was. “Both drivers are happy with the progress so far, their pace seems good and more importantly, the car is relatively easy to drive”.

The team’s striking new livery was unveiled at the official British GT media day at Snetterton last month. “The livery looks amazing!” exclaimed Tolman. “In many ways, its quite ground breaking in it’s concept and I have such huge respect for the guys at Creative Sign & Design, who brought the art work to life.”

British GT’s media day allowed the team to fit in some more valuable track time before the season opener at Oulton Park later this month, and with plenty of positive running under his belt, Pattison has the top step in mind. “The win with Luke Davenport at Brands Hatch in 2015 was incredible” he said, “yes there are moments in your life, such as the birth of your children, that are incomparable. But winning? That is almost certainly up there!”

With the GT4 class filling over 50 percent of the British GT grid, including five rival GT4 McLarens, the Tolman crew know they have a challenge on their hands for this year. Pattison is more than ready to get the season underway, “with the combination of a great driver package, and a strong car and team, we’ll certainly have some fun this year.”

The opening round of the 2017 British GT Championship will take place at Oulton Park this weekend – 15th and 17th of April.