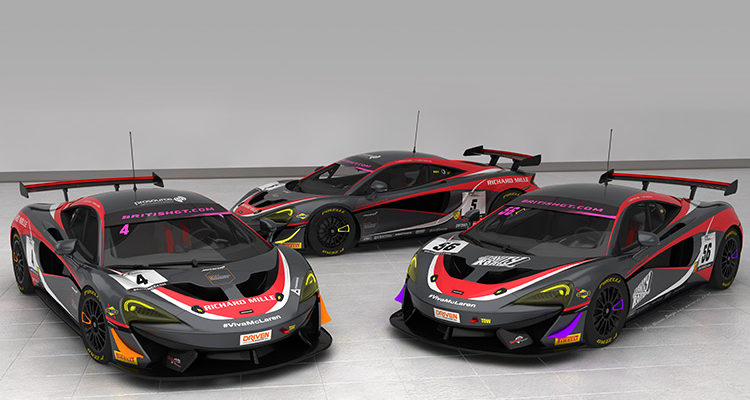 Tolman Motorsport launches a three-car assault on the 2018 British GT Championship, with a trio of McLaren 570S GT4 machines. This season will be the fourth consecutive year that the Warwickshire-based team have entered the UK’s leading GT series and it will be a landmark year for Tolman, as they have been selected to operate the cars for the inaugural McLaren Automotive Driver Development Programme.

The McLaren trio will see the return of the top running Pro-Am pairing, David Pattison and newly appointed McLaren Factory Driver Joe Osborne, donning their usual #56. Alongside them will be two Silver entries piloted by the four members of the McLaren Automotive Driver Development Programme Charlie Fagg and star Michael O’Brien in #4, and Jordan Albert and Lewis Proctor in #5.

Tolman Motorsport came out on top as the fastest McLaren, at nine out of the 10 British GT races in 2017. This record of consistently solid performances, teamed with the very strong six-driver line-up, sets Tolman and McLaren up for a great season ahead.

David Pattison and Joe Osborne return to BGT and will be striving to continue, and better, their superb 2017 performance. With a highly impressive score of four pole positions, four fastest laps, six class podiums – including three victories – and three overall podiums from the previous season, the #56 duo certainly have what it takes to fight for the top spot.

The quartet of young guns, who make up the McLaren Automotive Driver Development Programme, completed a successful preseason test programme in the Tolman Motorsport McLaren 570S GT4s prior to the BGT media day, and are looking forward to a strong showing throughout the 2018 season.

Tolman Motorsport is pleased to have the support of official sponsors, ATEC Fluid Systems, Kraftwerk Tools UK, LifeCheck and Shaw Sheet Metal, for their 2018 campaign.

Chris Tolman, Team Manager of Tolman Motorsport – “I am absolutely delighted that Tolman Motorsport has been chosen to operate the pair of 570S GT4s for the McLaren Automotive Driver Development Programme. We have been working very hard since our inception 10 years ago and it is a great accolade to be running three cars in the British GT Championship. We know we have a big challenge ahead of us, but we have a fantastic group of people who make up team Tolman and we are prepared to tackle this highly competitive grid in 2018.”

Dan Walmsley, Head of Motorsport for McLaren Automotive – “The McLaren Driver Development Programme will offer the four young drivers a fantastic opportunity to run in a real-world competitive environment in the British GT Championship, which gets stronger year on year. Looking at the line-ups and seeing so many different manufacturers involved, the 2018 series is shaping up to have one of the most exciting and competitive GT grids in the world. The drivers will work closely with the recently strengthened pool of McLaren Factory Drivers, and have the opportunity to draw on the knowledge and expertise of the members of the McLaren motorsport team and Tolman Motorsport. This will give them a strong foundation to build upon for their racing careers, and the 570S GT4 is the perfect vehicle for them to further develop and hone their skills.”

Joe Osborne, McLaren Factory Driver – “2018 has all the ingredients for a delicious year. David was on the form of his life towards the end of last season. Tolman Motorsport provided us with the best car on the grid and McLaren has proved the 570S GT4 is the car to beat. It’s super to come back as a consistent package, so we can build on an already strong foundation. Three cars in the team will make the Team’s Championship ours to win, that and the Pro-Am title should be our target for the year.”