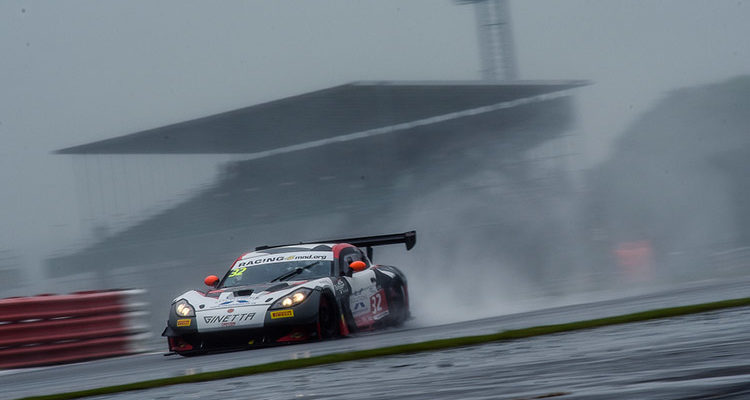 Tolman Motorsport enjoyed its strongest British GT Championship outing of the season, as well as one of Ginetta’s best ever showings in the GT3 category, to secure a double points finish in the series’ 500-kilometre blue riband event at Silverstone on Sunday.

Ian Stinton and Mike Simpson eventually came home seventh while David Pattison and Luke Davenport were 10th. However, those results don’t do justice to both crews’ remarkable performances during a predominantly wet three-hour encounter, a large portion of which was lead by both of the Warwickshire-based squad’s G55 GT3s.

That was partly due to Tolman hedging its bets by splitting both cars’ strategies at the start of the race, which began behind the Safety Car as a result of heavy rain, standing water and poor visibility.

Conventional thinking keeps an Am driver, who must start the race, behind the wheel while at reduced racing speed. But instead Tolman elected to pit Stinton after just three laps in an effort to get the pair’s Pro driver, Simpson, back out and amongst the slower gentleman drivers. His relative pace meant the #32 G55 was up to second by the time another Safety Car was required after 34 minutes, which soon became first once the Ginetta factory driver had made short work of Liam Griffin’s Lamborghini.

With the rain levelling British GT’s playing field Simpson could then demonstrate his considerable talent at the head of the field by setting fastest lap after fastest lap in the wet. Indeed, such was his pace that the lead had grown to 31 seconds by the time he handed back over to Stinton.

Meanwhile, the team’s #56 car proved there was more than one way to skin a cat in Silverstone’s tricky conditions by using a more conventional strategy to spend time at the front.

Pattison started the race and remained aboard until the second Safety Car period, at which point those who hadn’t already stopped bolted for the pits. Davenport re-joined the action in the middle of the GT3 pack but, like Simpson, used the conditions to his advantage by scything up through the order. He’d made it as far as third by the time Simpson pitted, and was soon reeling in new leader and former GT4 sparring partner Ross Gunn at a considerable rate of knots before the Aston Martin also stopped.

Indeed, British GT’s 2015 Rookie of the Year was comfortably the fastest and most consistently quick driver on track before and after taking the lead when his ‘feel’ in the evolving conditions as a drying racing line emerged proved crucial to establishing a healthy advantage.

The third and final Safety Car appeared with an hour remaining just as rain began to fall once more. That signalled the end of Davenport’s stint but also, crucially, forced the team to choose another set of wet tyres for Pattison’s subsequent run. Unfortunately the passing shower soon relented and, when racing resumed five minutes later, both Ginettas were on the wrong rubber.

Tolman’s one-two at the top of the leaderboard would therefore be short-lived thanks to the quicker pace of chasing Pro drivers who enjoyed the added benefit of slick tyres.

Both Pattison and Stinton gamely battled on until their final stops, the latter pitting first where Simpson was ready for his final run to the chequered flag and seventh place. Pattison spent a little longer behind the wheel and would have joined his team-mates in the top-eight were it not for what Race Control deemed an unsafe release when he rolled forward slightly as a result of stalling when leaving the box, resulting in a drive-through penalty.

Nevertheless, team owner Chris Tolman was delighted with the performance of both crews who not only defied the incredibly tricky weather and huge 51-car entry that caught out so many others, but also underlined the team’s potential when conditions allow.

“Ian, Mike, David and Luke all performed incredibly well on a day when conditions allowed us to show what we can do,” he said. “It was very tough for the first hour or so but the guys never put a foot wrong when it would have been so easy to make a mistake, just as many others did.

“It’s not been easy for our Pros to show what they’re capable of this season but both were incredible in the wet. Mike was up against a lot of Ams in his first stint so was always going to make progress, but the rate at which he did and his performance against the other teams’ Pros who employed a similar strategy to ours at the start really underlined his credentials.

“The same goes for Luke who picked up where Mike had left off after he’d pitted. His pace and consistency during the transition from a wet to greasy and then dry track was something else, especially in his pursuit of Ross Gunn for the lead. We knew another Safety Car would help and got one just at the right moment in terms of race time. The decision to remain on wets came very late but was also correct given the intensity of the shower that began just as we pitted. Had it carried on raining all the others who’d already stopped for slicks would have been forced back in. As it was we had no choice but to keep the guys out on the wrong tyres.

“But we have to look at the positives, and there are plenty this weekend. I’m absolutely delighted, actually, to have had both cars leading the middle phase of the race and running one-two with less than an hour left. It’s not often that you’ll see a Ginetta up there but we held our own today. Yes, the conditions helped, but it was no fluke and demonstrated what we and the drivers can do with a fair wind.”

Tolman Motorsport returns to British GT action at the legendary Spa-Francorchamps in Belgium on July 8/9, a circuit famed for its unpredictable weather…