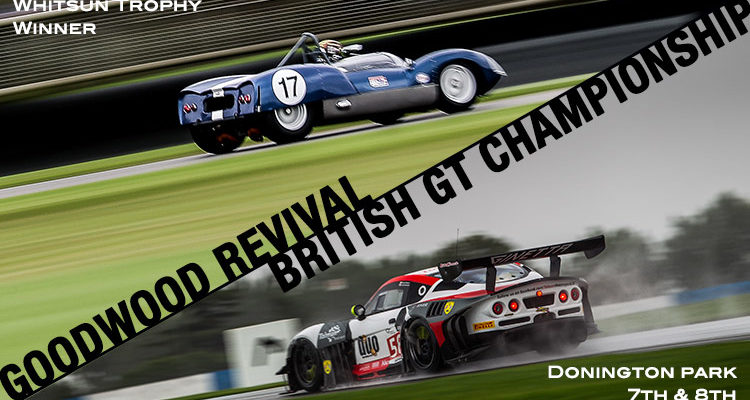 The Whitsun Trophy, reserved for late period sports-prototypes such as the Ford GT40, McLaren M1 and Lola T70 Spyder, is not only a highlight of Goodwood’s world famous Revival meeting but also the fastest race of the spectacular weekend.

Tolman’s historic arm has spent countless hours restoring its 1962-spec Lotus 19, which had already enjoyed success this season in the hands of Luke Davenport. However, with his British GT commitments taking priority, the team needed a capable pair of hands to tame its open-top V8 sportscar.

Step forward World Touring Car Champion and Revival star Rob Huff. Although the Lotus was vastly different to his usual 1.6-litre Honda Civic tin-top, Huff has plenty of experience in all manner of classic machinery and promptly qualified the 19 third for Saturday afternoon’s race.

With one of Detriots finest on tap, a deft hand would be required in the 25-minute race’s tricky wet conditions. And having successfully avoided wheelspin at the start, Huff, Rob Whitaker and Tiff Needell were soon pulling clear of the chasing pack.

While Whitaker’s Lola T70 Spyder enjoyed superior grunt around much of Goodwood’s long straights and corners, Huff’s lighter and nimbler 19 could close back in through the tighter turns, resulting in a classic game of cat and mouse between the pair. But the WTCC star’s pressure eventually told when Whitaker’s mistake late in the race gifted Huff the lead and, ultimately, victory by just 0.7s.

“It feels amazing when one of your cars wins a classic event like the Whitsun Trophy at Goodwood, particularly in our first event at Goodwood.” said team principal Chris Tolman. “We knew Rob wouldn’t let us down and he didn’t disappoint. It was a fantastic drive against faster opposition. I must also mention Luke who deserves a lot of credit for the way he’s helped develop the car. It’s been a proper team effort.”

Meanwhile, in Leicestershire, Saturday morning’s rain offered another Tolman driver the chance to shine. Ginetta factory ace Mike Simpson had already proven his and the G55 GT3’s capabilities by leading in the damp conditions at Silverstone, and that combination was once again at the top of the timesheets in both wet free practice sessions at Donington.

The older-generation Ginetta was unlikely to repeat that feat during a dry qualifying session, but Simpson still produced perhaps the lap of his season by circulating just half-a-second shy of the leading GT3 Pro time, which helped him and co-driver Ian Stinton line up an excellent seventh for Sunday’s two-hour race. Team-mates David Pattison and Davenport started 10th in the second G55.

While a lifting bonnet – resulting from a broken catch – would restrict Pattison’s vision and progress across his stint, Stinton’s eye-catching start saw the #32 car running fifth in the early stages. But just as a brilliant four-way battle was brewing, he was punted up the rear at the Melbourne Loop by Phil Dryburgh’s Aston Martin, which retired shortly afterwards as a result of the front-end damage sustained. Stinton’s car appeared unmarked but the impact had actually broken the right-rear wheel’s valve, which caused a puncture.

A misbehaving gearbox then compromised Simpson’s efforts once he climbed aboard after 50 minutes, but he battled on regardless to secure seventh and his and Stinton’s fifth-straight points finish of the season.

Meanwhile, things were going from bad to worse for Pattison. With the bonnet concertinaing, its structural impact on the car’s front end resulted in bodywork rubbing against and eventually puncturing a tyre just three minutes before the pit window opened, forcing an unscheduled stop.

Once the bonnet had flown off Davenport was able to lap quicker and eventually came home eighth to secure his and Pattison’s best result of 2016 in the process.

“Our wet pace has never been in doubt and Mike did a brilliant job in practice,” said Tolman. “It’s just a pity it dried up in time for qualifying! Nevertheless, his quali lap was sensational when compared with the newer generation cars’ times. He really demonstrated his class this weekend. He and Ian deserved better I think – there was some great racing at the start of Ian’s stint before the clash. He was really unfortunate with the broken valve that led to the puncture.

“I must also mention David’s performances this season. He and Luke haven’t had the results to show for it, but it’s been a mighty effort from David to step up from Ginetta G20s to the GT4 and now GT3 in just three years. He’s not done much testing and coped very well during often compromised race weekends.

“Our GT3 graduation’s not been easy but I think Tolman has done a very good and professional job to improve and develop the Ginetta this season. Both the car’s performance and reliability are improved over last year. The new generation cars from other manufacturers have raised the bar this year, so we’ve been constantly chasing. British GT is tough: the teams set very high standards and the quality of gentleman drivers is very, very high. I think we’ve competed and done as good a professional job as we could have.”