Trials and tribulations at the Masters 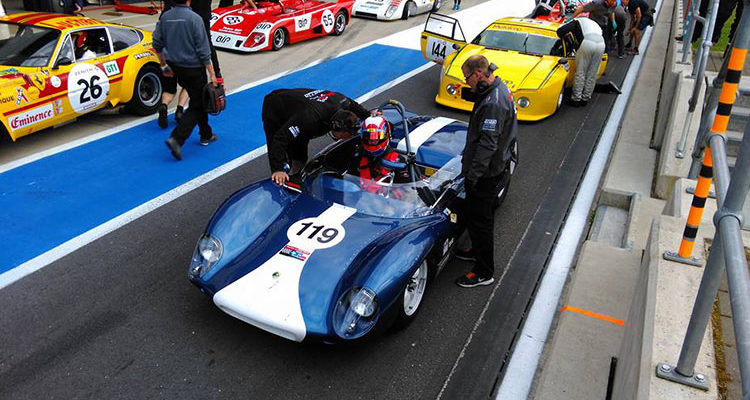 Tolman Motorsports Lotus 19 once again proved it has the pace to compete at the Silverstone Classic round of the 2016 FIA Masters Historic Sports car championship. The car was driven once again by the talented Luke Davenport, who during Friday night’s qualifying, placed the car in an extremely creditable 4th in Class. Luke was only beaten by the much larger engine capacity and younger McLaren and Lola in a field of over 9 cars in the Hulme class.

Unfortunately during the first lap of the race Luke was involved in an accident involving two Chevrons. He was left with nowhere to go and was forced into the leading Chevron by a Lola. Luke opted to retire the car rather than risk further damage. All the team were disappointed with the result after all the hard work over the course of the week, but the damage was only bodywork related and will be ready for the next round.

“The weekend had started very well with a promising qualifying where we were showing some great pace”, commented driver Luke Davenport. “The gear ratios were not working for us on the new profile tyre so there was definitely some time to gain too. I am absolutely gutted with how the weekend ended up. To be caught in somebody else’s accident is always frustrating, especially at such low speed on lap one! However, luck cannot always swing our way. As always, it was a pleasure to drive such an amazing car. The Lotus 19 is really coming on strong now and we are pushing cars far younger and more developed than ours!”

Christopher Tolman Team Manager added, “This was a weekend of trials and tribulations! A broken driveshaft in practice meant we had to have new ones made over night, a gearbox change on Saturday to get the best performance from the car and then forced into an accident on race day. We are all very disappointed at the outcome as the car has been developed over the year and is now very competitive in its class. Luke as always puts in the most professional of drives so we will be back! I’m relieved for our client who, due to Luke’s diligence and forethought!, won’t have a huge repair bill!”